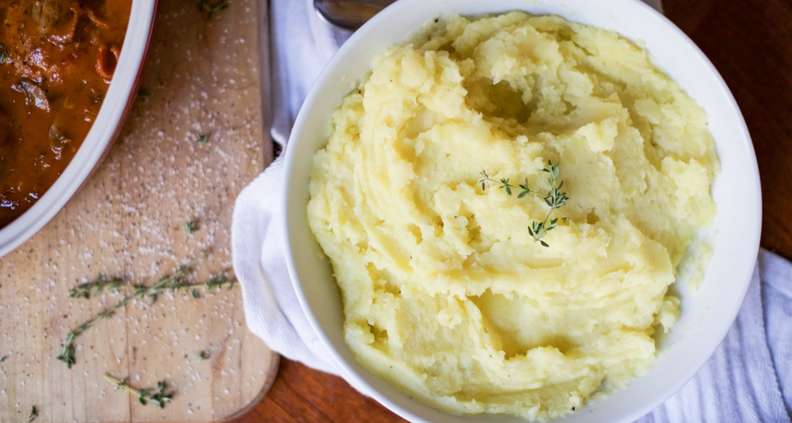 In a large pot, cover potatoes with 1 inch of water. Bring to a boil over high heat then add 1 tablespoon salt.

Once to a boil, reduce heat to keep a mild boil and cook for 15 to 20 minutes or until potatoes are soft. Drain potatoes in a colander.

Meanwhile, warm milk in a saucepan, being careful not to scald it.

Set the ricer on the rim of a deep bowl and fill ricer halfway with potatoes. Slowly press the plunger until the potatoes are pressed through. Discard the potato skins after each use.

When all potatoes have been riced, put the cubes of butter in the potatoes and stir gently with a spoon. Add the milk in to desired creamy consistency.

If you are making truffled mashed potatoes, you will want to add the tablespoon of white truffle oil at the end.

Forget that archaic mashing device that sits unused in your utensil holder, and go ahead and invest in a ricer. Cut your potatoes in half and set them in the barrel of the ricer, plunge the top down until the strings of potato come out of the bottom of the contraption. Make sure you have a bowl to catch it in and be careful some potatoes may be pushed out with a lot of force and not quite make it in the bowl.

This recipe is courtesy of Darling Down South.