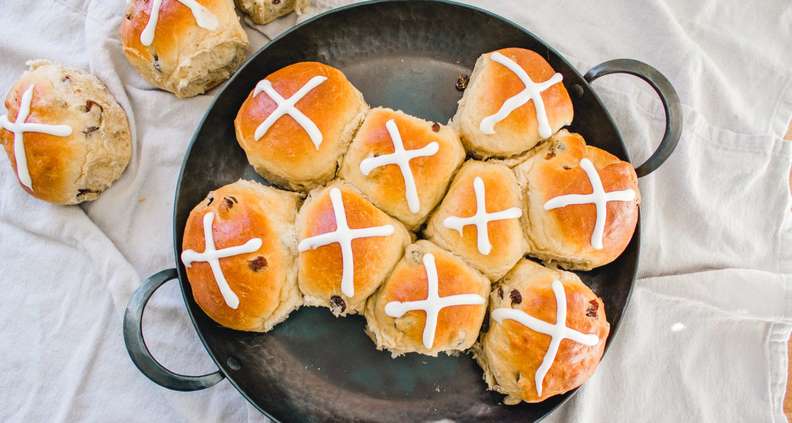 To make the buns: Lightly butter a 9- by 13-inch baking dish or other similarly-sized pan, such as a round roaster. Grease a large bowl with nonstick oil spray.

In a small saucepan, combine the raisins and bourbon. Bring to a simmer over medium-low heat. Cover, remove from the heat, and let soak until the raisins have absorbed most of the bourbon, about 5 minutes. Uncover and let cool to room temperature.

Meanwhile, in a 2-cup liquid measuring cup, combine 1 1/4 cups of the milk and two of the eggs. Separate the third egg and add the yolk to the milk mixture. In a small bowl, whisk together the remaining egg white and remaining tablespoon milk.

In the bowl of a stand mixer fitted with the dough hook, combine the flour, brown sugar, baking powder, yeast, salt, cinnamon, cloves and nutmeg. Mix on low speed until combined. With the mixer running, pour the measuring cup of milk and eggs into the flour. Increase the speed to medium-low and continue to mix until the milk is incorporated. Add the butter, a few pieces at a time, and mix until fully incorporated. Increase the speed to medium and mix the dough until it is smooth and elastic, 8 to 10 minutes; it will still be sticky.

Reduce the mixer speed to medium-low and add the now-cooled raisins, plus any bourbon remaining in the saucepan. Continue to mix just until the raisins are incorporated. Using a spatula, transfer the dough mixture to the prepared large bowl, cover with plastic, and let sit at room temperature until the dough has risen by about half, about 1 hour.

Transfer the dough to a floured counter and roll into a fat log. Cut the log in half. Cut each half into six equal pieces, so that you have 12 equal-sized pieces of dough in total. Roll each piece into a smooth ball and arrange evenly in the prepared baking dish. Cover with plastic, and let sit at room temperature until they've puffed enough to touch each other, about 1 hour. The dough should slowly spring back when poked with a finger.

While the dough balls rise, heat the oven to 375 degrees.

When you're ready to bake, brush the tops of the rolls with the reserved milk-egg white mixture. Bake until golden brown, 20 to 25 minutes. Transfer the baked rolls to a wire rack and let cool.

While the rolls are cooling, make the icing: In a medium bowl, whisk together the powdered sugar, bourbon and salt. Whisk in the milk, adding more, as needed, to form a smooth, thick, pipeable glaze. Transfer the glaze to a piping bag fitted with a small tip or a large zipper lock bag. If using a zipper lock bag, smoosh the icing to one of the corners and snip off the corner to create a small hole.

Pipe the icing into cross shapes on top of each cooled bun. Serve.

It's easy to infuse a bit of Southern flair into traditional Easter hot cross buns. All you need is a little bourbon and a good Southern-made pan. (Pyrex works just fine, too).