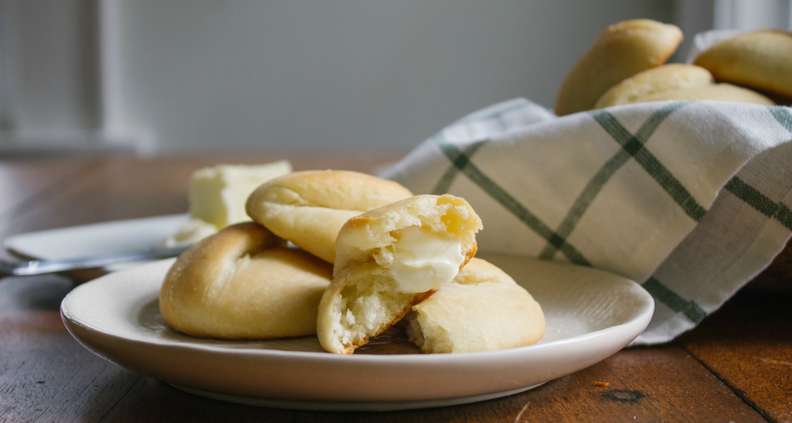 In a large bowl, whisk together the flour and salt. Grease a second large bowl with nonstick oil spray.

In a third large bowl, stir together the lard and the boiling water until the lard melts. Whisk in the sugar to dissolve. Let cool to lukewarm.

Meanhwhile, whisk together the lukewarm water and yeast.

When the lard mixture has cooled somewhat, whisk in the yeast mixture and the eggs until smooth. Pour the lard mixture into the flour and, using your hands, stir the mixture to form a loose, sticky dough. Transfer to the greased bowl, cover with plastic wrap, and refrigerate for at least 2 hours, or up to multiple days.

When you're ready to shape the rolls, line three baking sheets with parchment paper or grease with nonstick oil spray. Transfer the dough to a well-floured counter and knead until the dough is smooth and slightly sticky. This will take longer or shorter, depending on how long it rested in the fridge. Divide the kneaded dough in half.

Using a floured rolling pin on a floured counter, roll half of the dough into a circle about 1/4-inch thick. Use a 3-inch biscuit cutter to cut as many rounds out of the dough as possible. Remove the excess dough. Fold over each round almost completely in half, leaving a small lip of dough sticking out on the bottom. Transfer to the prepared baking sheet, placing the rolls about 2 inches apart. Re-roll the excess dough and repeat the cutting and folding process. Repeat with the remaining dough.

Cover the baking sheets loosely with parchment paper and let the rolls rise at room temperature until puffed, 2 to 3 hours.

Melt the butter on the stovetop or microwave. Brush the rolls with the melted butter and bake until just golden brown, about 15 minutes. Serve hot.

These pocketbook-shaped rolls bake up lickety-split, with a tender crumb and golden crust. Light, soft and sweet, they'd be right at home on any Thanksgiving table.

To make these rolls vegetarian, substitute shortening for the lard. You can make the dough up to a week ahead of time and bake only what you need for dinner. You can also freeze the rolls: Bake them for a few minutes to set the shape, let cool, and then freeze on a baking sheet until solid. Transfer the fully-frozen rolls to zipper lock freezer bags.

This recipe was originally published in Saving Southern Recipes.