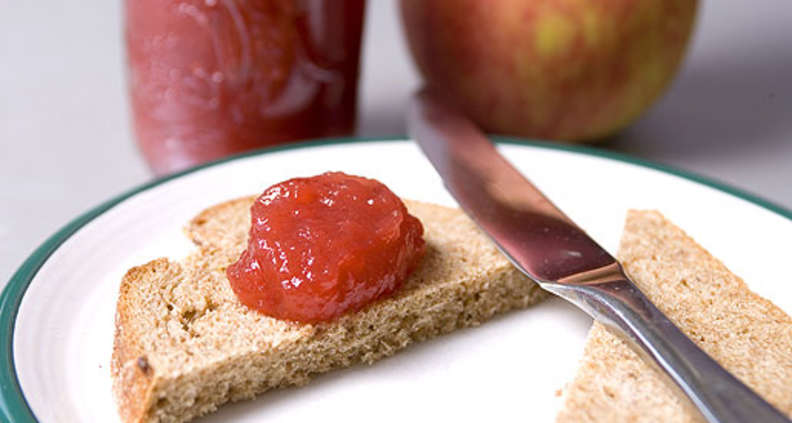 Quarter the apples (do not peel or core). Place the apples in a large pot, add the apple cider, cover and bring to a boil. Reduce the heat to a simmer and cook until apples are soft, about 20 minutes.

Press the apples through a chinois sieve or a food mill into a large bowl. Discard the remaining peels, cores and seeds in the chinois. Return the pulp and all of the liquid to the pot and stir in the sugar, cinnamon candies, vinegar, cinnamon and nutmeg until well-combined.

Cook over low heat, stirring regularly to prevent scorching, until the apple butter is thicker than apple sauce, 4 to 8 hours. After 3 hours, taste for sweetness and add up to 1/2 cup more sugar if needed. Pour into hot, sterilized jars and seal. Let cool to room temperature before serving.

While still far from a quick recipe, this updated version is considerably less labor-intensive — and messy — than the original, and a yummy way to get extra mileage out of a fruitful apple-picking expedition.

If little red candies aren't your thing, you might want to substitute an additional 1/2 cup sugar and an extra 1/2 teaspoon ground cinnamon for the red hots. If you don't have a chinois, don't give up. But do peel and core the apples before adding (with the peels and cores) to the pot with the cider. After cooking 20 minutes, scoop out the peels and cores, drain the juices back into the pot, and discard the peels and cores. Then mash the remaining apples or press through a sieve. After pressing the apples, you can cook them in a slow cooker, if you prefer. Cook uncovered on low, stirring occasionally, until thick.