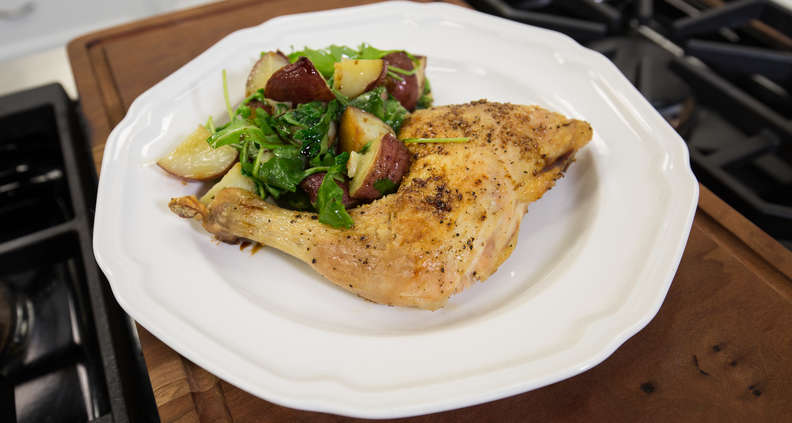 In a large bowl, combine the chicken with 1/2 of the cup olive oil, along with the garlic, rosemary and lemon slices. Toss to coat. Let sit at room temperature for 1 hour.

While the chicken is marinating, toss the potatoes with the remaining 1/4 olive oil in a second bowl. Season with salt and pepper. Arrange the potatoes in a single layer on a baking sheet and roast until lightly browned and crisp, 30 to 40 minutes.

Transfer the marinated chicken to a large cast iron skillet. Season both sides of the chicken with salt and pepper and roast, skin side-up, until browned, crisp, and a meat thermometer reads 160 degrees, 30 to 35 minutes.

To serve, divide the leg quarters between two serving plates.

Place the potatoes in the hot skillet in which the chicken was cooked. Toss to coat with any rendered chicken fat and cook medium heat until crisp, about 5 minutes. Add the arugula and let wilt slightly, 10 to 15 seconds. Transfer to the serving plates. Drizzle with lemon juice and vin cotto. Serve.

With minimal ingredients and just a little bit of prep time, this is the perfect recipe for easy weeknight cooking. While the chicken could benefit from a more lengthy marinade, one hour is plenty of time to impart the flavors of lemon, rosemary and garlic into the chicken. If you decide to marinate the chicken longer than one hour, transfer it to the refrigerator.

Literally translated as “cooked wine,” vin cotto is made by cooking grape must down into a thick, dark syrup. The resulting flavor is similar to an aged balsamic vinegar, which you can use as a substitute.