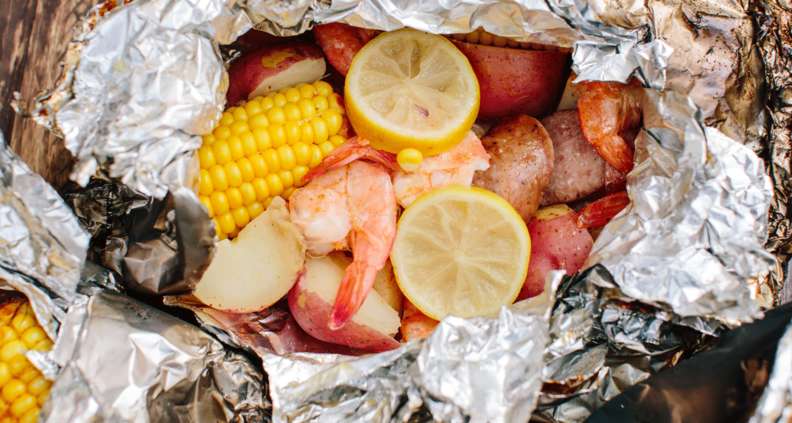 Place potatoes in a medium saucepan and cover with cold water. Simmer over medium heat until potatoes are fork tender. Strain away water and let potatoes cool.

Tear off eight large sheets of heavy duty aluminum foil, approximately 18 inches, and stack into four double-sided sheets. Evenly divide potatoes, corn, shrimp and sausage, and place in the center of each piece. Season the contents of each pile with 1 teaspoon of Old Bay and toss to coat. Add two slices of lemon and 2 tablespoons wine to each pile, then seal the edges tightly, forming a packet.

If cooking indoors, heat the oven to 450 degrees. If cooking over a campfire, light a fire.

Who says a shrimp boil requires a pot? Capture the same flavors of a classic Low Country Boil in a convenient aluminum foil pouch. The foil allows the shrimp and corn to steam, almost as if they had spent time in a giant pot of seasoned water. You’ll need to par cook the potatoes, otherwise the shrimp will be overcooked while the potatoes are still nearly raw.

This recipe works well outdoors over a campfire or indoors in the oven.