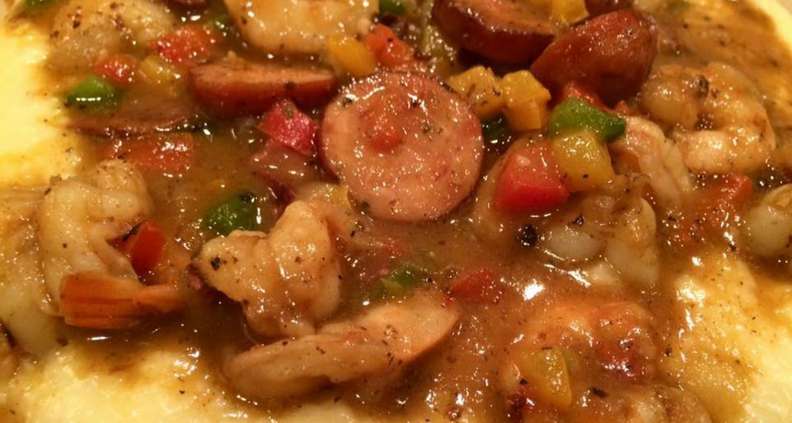 In a large saucepan with a lid, bring the water, grits, and 2 teaspoons salt to a boil over medium-high heat. Stir in the half-and-half, reduce the heat to low, and simmer until the grits are thickened and tender, 15 to 20 minutes. Keep warm.

In a medium bowl, toss the shrimp with lemon juice, cayenne and a few pinches of salt.

Return the skillet to medium heat and add the peppers, onion and garlic. Cook, stirring frequently, until the onion is translucent, about 8 minutes. Transfer to the bowl with the sausage and stir in the shrimp.

In a small saucepan, melt the butter over medium heat. When the butter is foamy, whisk in the flour. Reduce the heat to low and cook, stirring constantly, until the mixture is medium brown in color, 8 to 10 minutes. Watch carefully; the mixture burns easily.

Transfer the butter-flour mixture into the large skillet, along with the sausage, shrimp and vegetables. Place the skillet over medium heat and pour in the chicken broth, worcestershire sauce and bacon, cooking and stirring until the sauce thickens and the shrimp become opaque and bright pink, about 8 minutes.

Just before serving, mix the cheeses into the grits, stirring until the cheese is melted and the grits are creamy and light yellow. Serve the shrimp mixture over the cheese grits.

This recipe was submitted by Southern Kitchen reader and Atlanta-based chef Elliott Farmer.