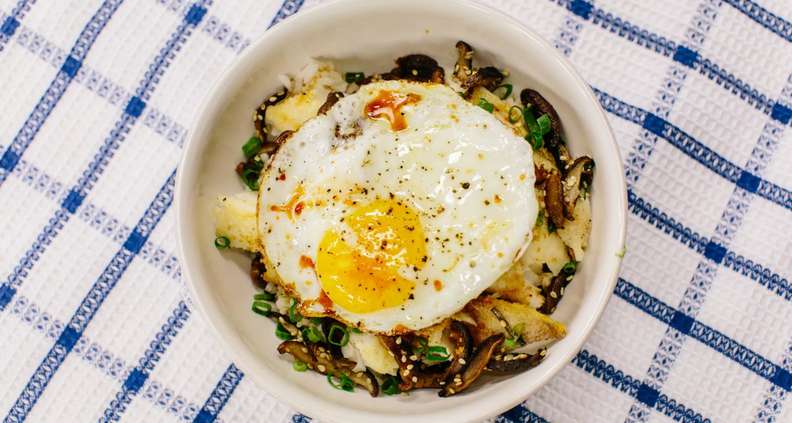 To make the vinaigrette: In a medium bowl, whisk together the soy sauce, lime juice, vinegar, honey and Sriracha. While whisking constantly, slowly drizzle in the olive oil until smooth and emulsified. Season to taste with salt and pepper.

To make the rice bowl: In a medium saucepan, heat 2 tablespoons of the olive oil over medium heat. When the oil is shimmering, add the onion and cook, stirring frequently, until soft and translucent, about 5 minutes. Add the rice and cook, stirring constantly, until the grains are toasted and translucent, about 2 minutes. Add the water and bring to a simmer. Cover and reduce the heat to medium-low. Cook until all the water has been absorbed and the rice is soft and fluffy, 15 to 20 minutes. Fluff the rice with a fork and transfer to a sheet pan to cool slightly.

Meanwhile, heat 1/4 cup of the olive oil in a large skillet over medium-high heat. Season the catfish on both sides with salt and pepper, then lightly sprinkle with cayenne pepper. When the oil is shimmering, add the catfish and sear the catfish until well browned and cooked through, 4 to 6 minutes per side. Once the catfish has cooked through, remove from the skillet and tear into large pieces.

Wipe out the skillet and heat the remaining 2 tablespoons olive oil over medium heat. When the oil is shimmering, add the mushrooms and cook, stirring constantly, until the mushrooms have caramelized and given off their liquid, 4 to 6 minutes. Add the benne seeds and cook, stirring constantly, until the seeds are toasted and fragrant, about 2 minutes. Turn off the heat, stir in the sliced scallions, and season to taste with salt and pepper.

To assemble, divide the rice between four serving bowls. Top each bowl with 1/2 cup of the black-eyed peas and one-quarter of the catfish. Add the mushrooms.

Melt 1/2 tablespoon of the butter in a small nonstick skillet over medium heat. When the butter is foamy, crack one egg into the skillet, lightly season with salt and black pepper, and cook until white is firm but yolk is still runny, about 3 minutes. Transfer to one of the grain bowls. Repeat with the remaining butter and eggs, cooking one egg at a time.

Drizzle each of the grain bowls with the soy vinaigrette and garnish with cilantro leaves. Serve.

Building a rice or grain bowl should be more of an improvisation than a standardized recipe. Have a rough idea of the flavors you’d like to incorporate, and then you’re only limited by your imagination. In this version, we’re taking ingredients common to Southern cuisine—catfish, benne seeds, black eyed peas—and giving them a bit of Asian flair. With this general framework, you’re free to make substitutions wherever you like, from the type of fish to the types of peas and mushrooms. The runny egg yolk mixes beautifully with the soy vinaigrette to create a “sauce” that’s rich, salty, and packed with umami.