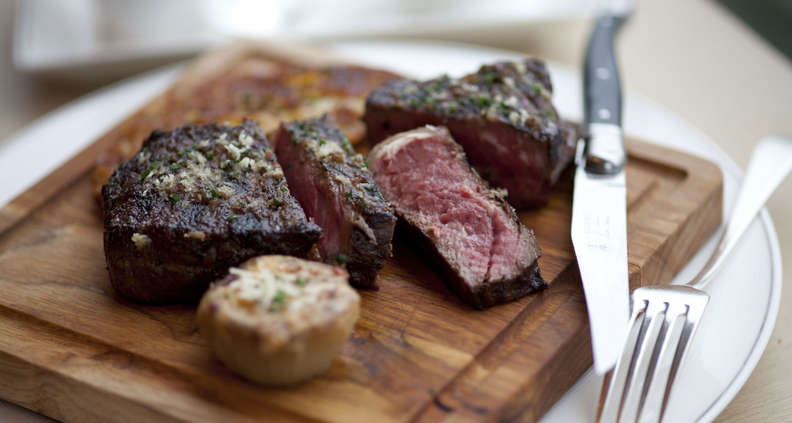 Lay the steaks on a piece of parchment paper. Brush one side of each steak with olive oil, then sprinkle the first side with half of the salt and half the steak seasoning. Flip the steaks over and repeat on the opposite side. Let the steaks sit until they come to room temperature, about 1 hour.

Meanwhile, heat a grill to high. If your grill has a temperature gauge, shoot for around 550 degrees. Place a large cast iron skillet inside the grill to heat.

Place the steaks vertically into the hot cast iron skillet, fat cap side down. If you have one, insert a probe thermometer (not an instant-read) into the final steak. Close the lid on the grill and sear for 2 minutes. Turn the steak so they are flat on one side and cook for 5 minutes. Flip the steaks and cook on the second side until the thermometer reads 120 degrees (for medium-rare), about 5 minutes.

Transfer the steaks to a cutting board and let rest for 10 minutes before serving.

Once you try cooking a steak in a cast iron pan, you'll never cook one one the grill again. The deep flavor and caramelization provided by cast iron translates to big flavor in your steak.

Bringing the steaks to room temperature will allow more even cooking throughout the steak. If you were to leave the steaks refrigerated until ready to grill, the outside will cook at a much faster rate than the inside, resulting in a “bullseye” appearance instead of a consistent color throughout.