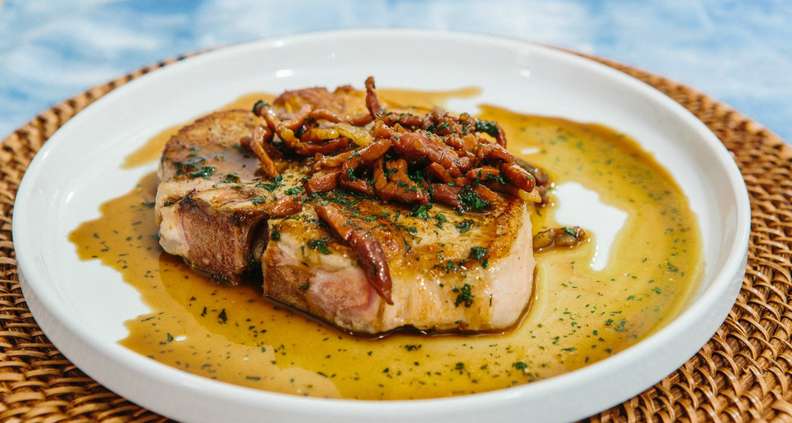 Heat a large cast iron skillet over medium-high heat. Season the pork chops on both sides with salt and pepper. Once the pan is hot, add the oil, swirl the pan, and then add the pork chops. Sear until browned and cooked through, about 8 minutes per side for medium.

Transfer the pork chops to a plate and add the country ham to the skillet. Cook, stirring frequently, until the ham is fragrant and much of its fat has rendered, about 5 minutes. Add the coffee and bring to a boil. Continue to boil until the coffee has reduced to about 1/3 cup.

Stir in the chicken broth and sugar, return to a simmer, and continue to cook for 5 minutes. Remove from the heat and stir in the butter and parsley. Spoon the gravy over the pork chops and serve.

Known for its sharp notes of black coffee, red eye gravy is traditionally served alongside country ham. This recipe captures the flavors of red eye gravy, but also combines both fresh and cured pork. Instead of serving the gravy atop the country ham, the ham is becomes part of the gravy, which we serve on top of a pork chop. The whole dish is best served with a side of grits or biscuits — or both.