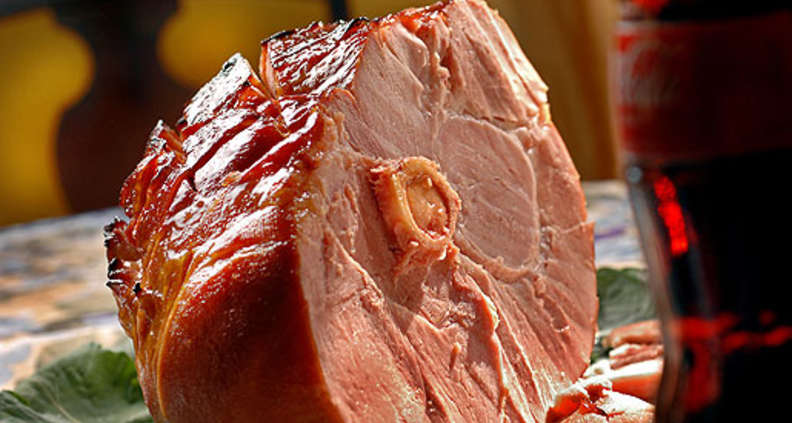 Heat the oven to 350 degrees. Line a roasting pan with large sheets of aluminum foil in opposite directions to wrap the ham tightly for roasting. Set aside.

Using a chef's knife, score the ham in a crosshatch pattern. Combine the brown sugar and mustard in a small bowl to make a paste. Spoon the paste onto the ham to thoroughly coat, packing it in the crevices.

Pour the Coca-Cola over the ham and season with freshly ground black pepper. Seal the ham in the aluminum foil. Transfer the ham to the oven and roast, basting occasionally, until the internal temperature reaches 140 degrees, about 10 minutes per pound, or 50 to 60 minutes.

Remove the ham from the oven and peel back the foil to expose the ham. Baste the ham with the pan juices.

Heat the oven to broil. Return the ham to the oven and broil until dark brown and bubbly, 5 to 7 minutes, depending on the strength of your broiler. Transfer the ham to a cutting board to cool slightly. Thinly slice with a carving knife and serve the pan juices on the side.

Chef and cookbook author Virginia Willis is familiar with this especially Southern combination, as her grandmother made a similar version. She commented, "The sweetness of the Coca-Cola marries very nicely with the slightly salty ham." She points out this recipe uses a cooked ham that is actually ready to eat without further cooking. She said, "These hams are often labeled 'Fully Cooked, ' 'Ready to Eat, ' or 'Heat and Serve.' They may be eaten as is but are more often heated to an internal temperature of 140 degrees for fuller flavor." One slight adjustment: Willis broiled the ham just before serving to give it a nice caramelized exterior.