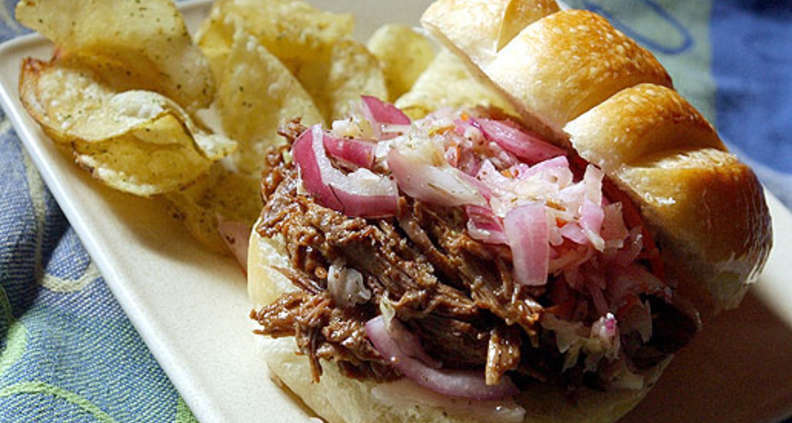 To make cider slaw: In a large bowl, combine the coleslaw mix and onion.

To make the beef: In a large Dutch oven over medium heat, add 1 tablespoon olive oil. Add onion and sprinkle with brown sugar. Saute for 10 minutes, or until soft and lightly browned. Remove onion from pan and set aside.

In a large zip-top bag, combine flour, salt, pepper, garlic, thyme and rosemary. Add meat and shake until all sides are well-covered.

Add remaining tablespoon olive oil to pan and sear the meat until brown on all sides. Remove roast from pan and set aside.

In a bowl, combine beef broth, stout, vinegar and bay leaf. Place in Dutch oven and bring to a boil for about 3 minutes, scraping off any bits that have stuck to the bottom of the pan. Return the meat to pan and cover with onions. Increase heat to high and bring to a boil (the liquid should not cover the meat). Reduce heat to low, cover and simmer until meat is fork tender, about 2 1/2 to 3 hours. Remove meat and set aside to cool. Discard cooking liquid.

When cool enough to handle, shred with fingers or 2 forks. Discard any excess fat. You should have about 10 cups of meat. In a large saucepan over low heat, combine barbecue sauce and 1/2 cup water. Add meat and stir to rewarm. If necessary, add more water or barbecue sauce.

Serve on kaiser rolls with slaw.

Beef and Beer. What's not to like. Check out this perfect recipe for beer braised beef and apple cider slaw. Yum.

You'll probably need 2 or 3 roasts to total 6 pounds. Trim excess fat well. If you want to use a slow cooker after browning meat and heating the liquid, transfer the mixture to the cooker, cover and cook on high for 4 to 5 hours or on low for 8 to 10 hours. You can freeze some cooked meat for later and add the sauce separately. For each cup of meat, heat 1/4 cup barbecue sauce thinned with 2 tablespoons water. Figure 1/2 cup meat per sandwich.