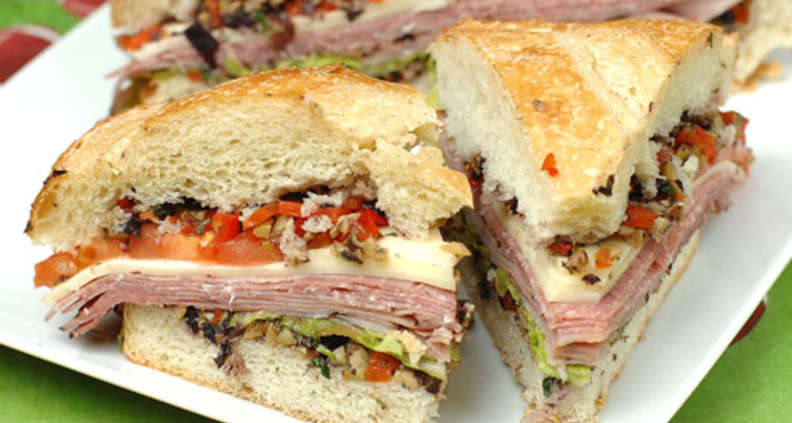 In a bowl, combine the green black and olives, olive oil, parsley, oregano, red bell pepper and lemon juice. Cover and refrigerate for at least 8 hours.

Split the bread in half horizontally and remove most of the soft inner bread, creating a cavity inside each half. Reserve the interior bread for another use, such as breadcrumbs.

Wrap the sandwich tightly in plastic wrap. Place on a large plate, cover with another plate and weigh down the plate with heavy cans or another weight. Refrigerate for at least 30 minutes, or up to 6 hours.

To serve, unwrap and cut the sandwich into 12 wedges.

Make the olive salad for this New Orleans treat quickly by using the pulse button on a food processor. Traditionally, two types of salami — mortadella and a hard salami such as soppressata — are used, but they can be difficult to find. This version features a combination of salami and ham. For variety, substitute 1/2 cup chopped and drained sun-dried tomatoes in oil for fresh tomatoes.