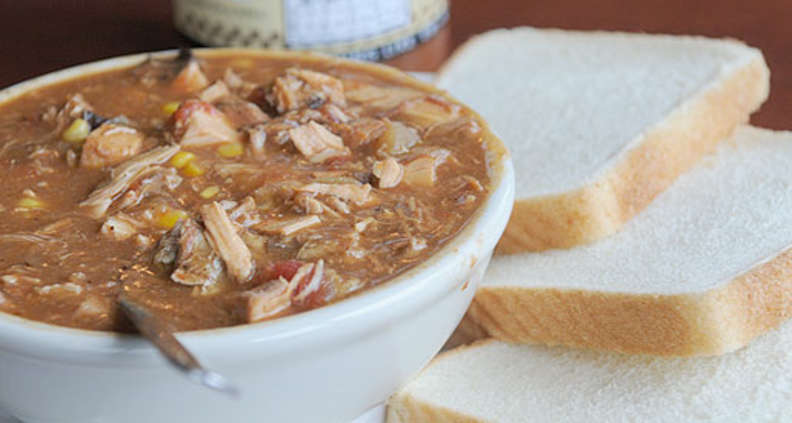 To make the pulled pork and chicken: In a large, non-reactive bowl, combine the vinegar, onion, Worcestershire sauce and hot sauce. Add the pork; turn to coat. Cover and refrigerate for 8 to 10 hours, turning occasionally.

Transfer the entire contents of the bowl to a large slow cooker. Add the chicken and liquid smoke, and season with salt and pepper. Cover and cook on low until the meat is very tender, 8 to 9 hours.

Remove the meat from the slow cooker and discard the cooking liquid. Let sit until cool enough to touch and then shred the meat with two forks. Discard all bones and skin.

To make the Brunswick stew: In a stock pot, melt the butter over medium heat. Add the onion and cook, stirring frequently, until translucent, about 5 minutes. Add the chicken broth and potato, bring to a simmer, and cook for 15 minutes.

Stir in the barbecue sauce, tomatoes, corn and the shredded pork and chicken. Return to a simmer, reduce the heat to medium low and cook, stirring about every 15 minutes to prevent sticking, until all of the flavors have melded, about 2 hours. Add additional chicken stock, as needed, to thin the stew.

Unless you're going to dig a barbecue pit in your backyard, you probably won't be able to achieve the smoky depths of flavor found in Dreamland's Brunswick stew recipe. But with a bottle of the company's secret-recipe sauce purchased online, you can create a pretty good facsimile. Brunswick stew connoisseurs will note another unusual feature of Dreamland's recipe: the lack of lima beans.

You can either make your own pulled pork and chicken in a slow cooker, or you can use pre-purchased barbeuce, in this recipe. If you make it at home, take note that this step requires 8 to 10 hours of marinating time and 8 to 9 hours of cooking time. Weigh the meat for the stew after you've cooked and shredded it.

This recipe comes courtesy of Dreamland Barbecue in Roswell, Georgia.