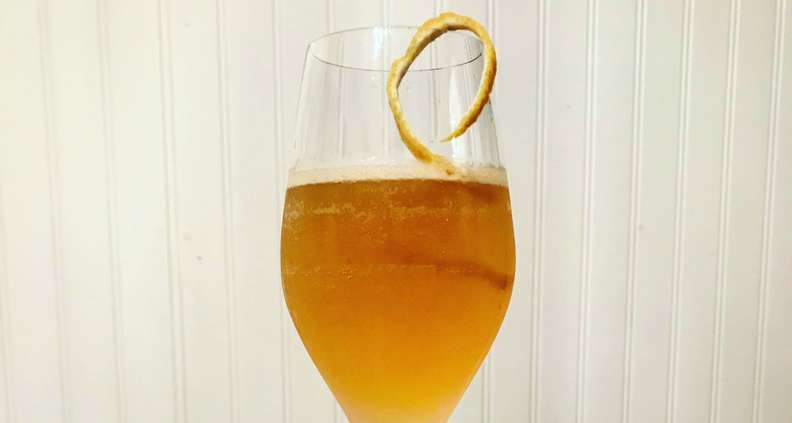 Combine the brandy, lemon juice and simple syrup in a shaker. Add ice cubes and shake vigorously until chilled. Double-strain the cocktail by holding a small, conical fine mesh strainer between the shaker tin with a Hawthorne strainer (or a cobbler shaker with its built-in strainer) and a champagne ﬂute. Pour the cocktail through both strainers into the glass. Top with the cider. Garnish with the lemon peel spiral and serve immediately.

The French 75 got its name from the World War I 75mm ﬁeld gun, so in a similar fashion, Jerry Slater named this drink after the Gatling gun, a predecessor of the modern machine gun, which was invented by North Carolina native Dr. Richard Gatling. While most versions of a French 75 call for gin, Chris Hannah, a bartender at Arnaud’s French 75 Bar in New Orleans, insists the drink should be made with French cognac. So in a Southern twist, we're using aged brandy from Louisville, Kentucky's Copper & Kings American Brandy Company. To really kick up the apple ﬂavor, use their new Floodwall Apple Brandy.