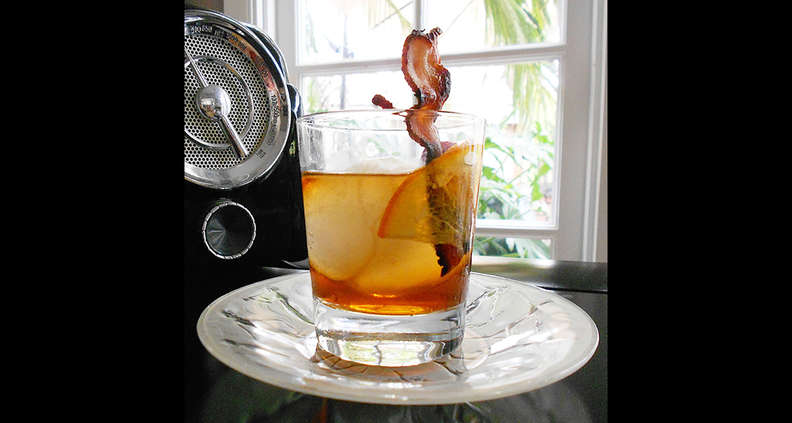 To make the bacon-infused bourbon: Place the bacon in a large skillet over medium heat. Cook, stirring frequently, until the bacon has rendered all of its fat and turned crisp. Using a slotted spoon, remove the bacon bits and save for another use.

In a large jar, combine the bacon fat with the bourbon. Stir, then refrigerate until the fat solidifies. Use a spoon to remove the fat and reserve for another use, such as grilled corn. Strain the bourbon through a triple layer of coffee filters into a second jar. If the filter backs up, replace with clean filters as needed. Refrigerate until ready to use.

To make the cocktail: Place the bourbon, maple syrup and both bitters in a cocktail mixing glass filled with ice. Stir until well-chilled and then strain into a rocks glass.  r, add a handful of ice. Shake well and strain into an Old Fashioned glass. Add the spherical ice cube, bacon slice, orange wheel and cherry. Serve immediately.

Maple syrup makes a brilliant substitute for traditional white sugar in this Old Fashioned recipe, which was created by writer Sabine Morrow and offers a nod to the version she enjoys at Iberian Pig in Decatur, Georgia. We prefer to use the packaed bits and pieces sold by Trader Joe's because they tend to contain more fat than meat, which is what we want in this recipe.