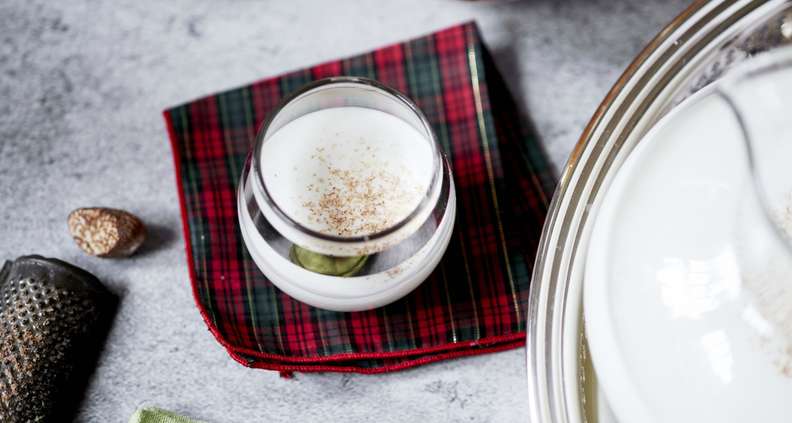 Place the egg yolks in a large bowl and beat with an electric mixer on medium-low speed until the yolks are well-combined and begin to lighten. Gradually beat in half of the sugar. While the mixer is running, slowly pour in the bourbon and rum.

Place the egg whites in a second large bowl, and with clean beaters, beat on high speed until the whites come to soft peaks, about 3 minutes. Gradually add the remaining sugar, and beat until stiff peaks form, about more 2 minutes.

Place the cream in a third, chilled large bowl and with clean beaters, beat on high speed until whipped, about 2 minutes. Fold the egg whites into the whipped cream, and then fold the egg white mixture into the egg yolk mixture. If you want to thin the eggnog, add a little milk. Sprinkle with freshly grated nutmeg just before serving.

Not to be confused with "milk punch," a New Orleans boozy milk beverage served cold as a hangover cure, eggnog is a festive beverage. It has always been served at Christmas or  New Year's, in cut glass cups, and ladled out of a cut-glass or silver punch bowl. Or it was poured into tall glasses, to be eaten with iced tea spoons. This recipe, from bestselling cookbook author Anne Byrn, is adapted from Eugene Walter of Alabama. It also appeared in Taste of a Place.