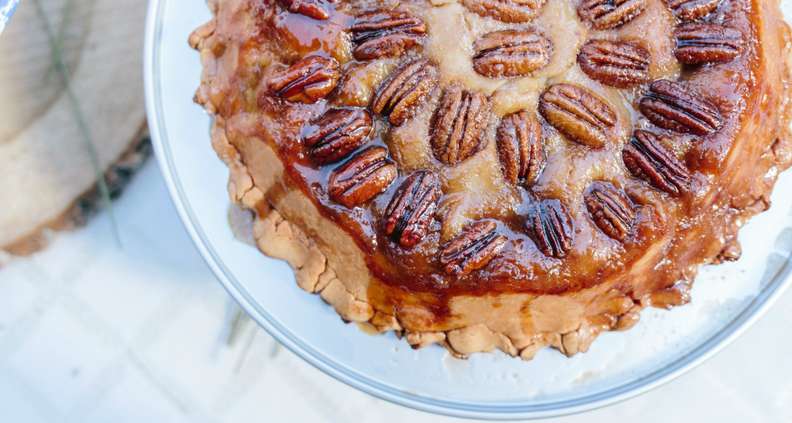 Use your hands or a rubber spatula to spread the butter across the bottom of a 9-inch deep-dish pie plate. Arrange the pecan halves in the pie plate and gently press into the butter. Sprinkle 2/3 cup of the brown sugar over the pecans and press firmly to adhere to the butter and pecans.

Place one one the rounds of pie dough over the brown sugar and press into the sides of the pie plate. Leave additional overhanging crust in place for now.

This clever recipe comes courtesy of Southern Kitchen reader Joann Conway, who won our holiday pie recipe contest. Conway said she was first inspired to make the pie while traveling and picking up a free booklet containing a similar recipe. "I believe it was in North Carolina," she wrote in an email. "The upside-down technique intrigued me."

The original recipe, by Elizabeth Deer, was a winner of the North Carolina Consumer Apple Recipe contest in 2004. Conway, however, has upped the molasses flavor by using all brown sugar and increased the ooey gooey sauce by adding more butter to the base. Home-mixed apple pie spice also helped to build flavor and a lighter touch with the pecans makes for a more elegant presentation. We also chose to bake the pie for over an hour to ensure a crisp crust and ultra-tender apples.

It turns out that upside-down apple pie is a sleeper hit in recipe contests. It first made an appearance in the 1951 Pillsbury Bake-Off using, of course, Pillsbury Pie Crust, and a corn syrup-filled sauce. This style of pie has also made an appearance, topped with a crumbly chopped pecan sauce, in Southern Living and Taste of Home, where it gets a sugary cinnamon roll-inspired glaze over the top.