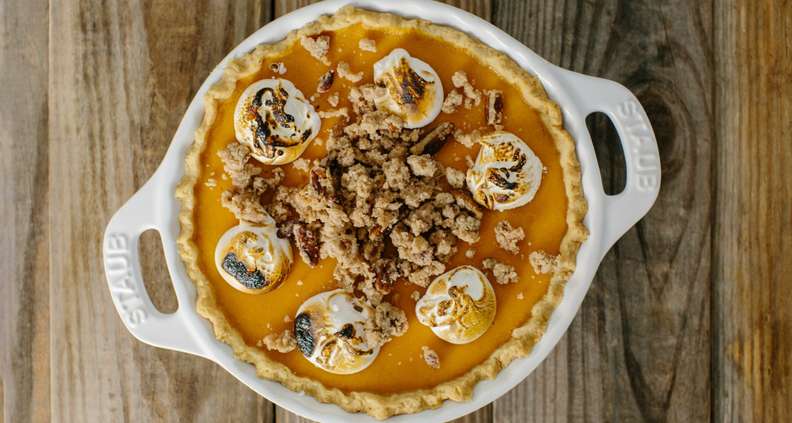 To make the filling: Heat the oven to 325 degrees.

Line a 9-inch pie plate with the rolled pie dough. Trim off excess dough and crimp the edges. Line the crust with parchment paper and fill with pie weights. Bake until the crust begins to set, about 10 minutes.

Remove the parchment paper and pie weights and return the crust to the oven until it just begins to brown, about 5 minutes. Let cool to room temperature.

In a large bowl, whisk together the sweet potatoes, half and half, sugar, butter, eggs, vanilla, salt, ginger and cinnamon until smooth and satiny. Pour the mixture into the cooled pie crust so that it reaches just below the top of the crust. Depending on your pie plate, you may have extra filling.

Bake until the filling is set, 40 to 50 minutes. Let cool to room temperature. Keep the oven on.

To make the streusel: Line a rimmed baking sheet with parchment paper.

In a large bowl, mix together all of the ingredients with your hands until they form a crumbly mixture. Spread into an even layer on the prepared baking sheet and bake until browned, 15 to 20 minutes. Let cool to room temperature.

As the pie and streusel cool, make the marshmallows: Spray a 9- by 13-inch baking dish with nonstick oil spray, then lightly dust with powdered sugar.

In a stand mixer fitted with the whisk attachment, beat the egg whites on high speed until they reach stiff peaks, 60 to 90 seconds. Transfer the whipped egg whites to a medium bowl and wash the mixer.

In the now-clean mixing bowl, stir together the cold water and gelatin. Let sit while making the sugar syrup.

In a heavy-bottomed saucepan, combine the 2 cups powdered sugar with the granulated sugar, corn syrup, hot water and salt. Place over low heat and cook, stirring, until the sugar has dissolved, about 3 minutes. Increase the heat to high and bring the mixture to a boil. Continue to boil, stirring frequently, until the mixture registers 240 degrees on a candy thermometer, 8 to 10 minutes. Pour into the mixing bowl with the gelatin.

Starting on low speed and gradually increasing to high, beat the sugar mixture until white, thick and nearly tripled in volume, 10 to 15 minutes. The mixer bowl should feel cool to the touch. Add the egg whites and vanilla and beat until just combined.

This pie captures the essence of sweet potato casserole with marshmallows, but rightfully presented in a dessert format.

Don’t be intimidated by homemade marshmallows: with a candy thermometer and a stand mixer, the process is actually very easy. You can also substitute store-bought marshmallow Fluff for the homemade marshmallows; simply dollop or pipe it around the edges of the pie. You will have extra streusel, but it tastes great on ice cream.