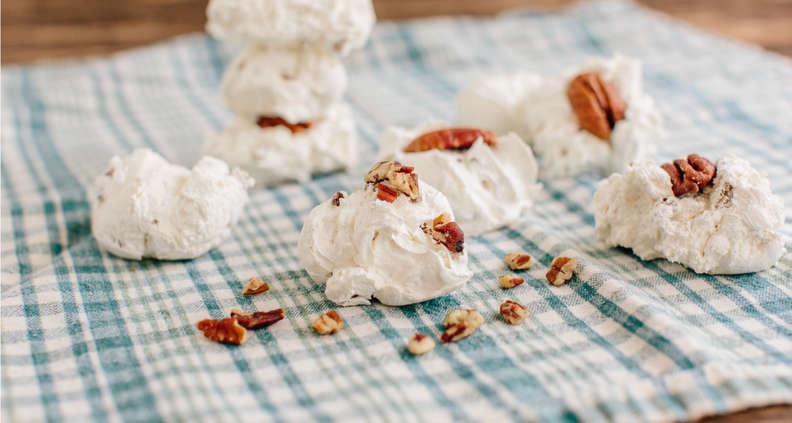 In a large saucepan, combine the corn syrup, water and salt. Pour the sugar into the center of the saucepan, trying not to hit the sides of the saucepan with the sugar. Place the saucepan over medium-high heat and let the sugar melt into the water. If necessary, gently swirl the saucepan to help the sugar dissolve. Once all of the sugar has melted, clip a candy thermometer onto the pan and continue to boil, without stirring or swirling, until the mixture reaches 260 degrees (the hard ball stage), 8 to 10 minutes. It is very important not to stir during this step.

While the candy mixture is boiling, place the egg whites in the bowl of a stand mixer fitted with the whisk attachment. Beat on medium-high speed until the egg whites form stiff peaks.

With the mixer running on medium-high speed, very gradually and carefully pour the hot syrup into the egg whites. This should be take about 2 minutes.

Add the vanilla, scape down the sides of the bowl and continue to beat the mixture on medium-high speed just until the mixture turns from glossy to matte, 5 to 8 minutes. Watch carefully. When you lift the whisk, the candy should stand on its own. If it flattens, beat for another minute or so. Make sure to not over-beat. The mixture should be malleable. Stir in the chopped pecans.

Lightly grease two spoons with nonstick oil spray. Use the spoons to drop the divinity onto waxed paper. Top with the pecan halves, if desired. Let the candy set for about 2 hours before serving or storing in an airtight container for up to one week.

After studying her grandmother's old church cookbooks, Southern Kitchen's Visual Content Producer Ramona King learned the secret to making Southern divinity candy. What distinguishes a batch as successful is the candy temperature and length of beating (more on this in her story). The end product is slightly crisp on the outside, fluffy on the inside and has a satisfying crunch of pecans in every bite. Some decide to put a single pecan half on top, and some add chopped pecans inside the mixture.