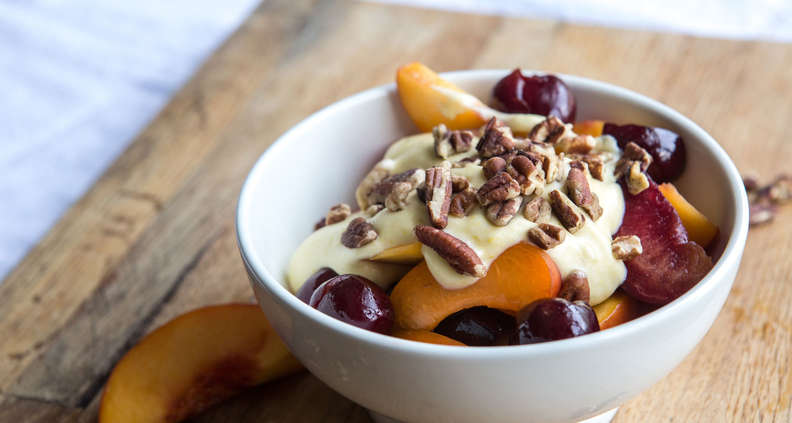 To make the sabayon: Fill a medium saucepan with 2 inches of water to act as a double boiler and simmer over medium-high heat. In a heatproof mixing bowl, combine egg yolks, sugar, bourbon, salt, and vanilla. Place the bowl inside the saucepan, making sure the bottom of the bowl is not touching the water directly, and whisk constantly until mixture has thickened enough to hold a ribbon shape. If you see the mixture start to curdle, remove from the heat to cool slightly, continue whisking, then return it to the double boiler. Once the custard has thickened, remove from the heat to cool.

As the custard is cooling, place the cream in a mixing bowl and use a whisk or a mixer to whip the cream to soft peaks. Working in three installments, fold the cream into the custard until incorporated. Refrigerate until ready to serve.

In a large mixing bowl, combine pitted stone fruit with sugar and lemon juice, tossing thoroughly. Allow fruit to macerate for 45 minutes to 1 hour, or until the fruit gives off some of its juice and softens slightly.

To serve, divide the fruit among four serving bowls. Top with 1 cup of the sabayon and sprinkle with toasted chopped pecans.

A sabayon is a stirred, sweetened custard that has been fortified with type of alcohol. In this instance, we’re giving it a Southern flair by adding bourbon. The sabayon can be prepared well in advance, but you’ll only want the stone fruit to macerate for about an hour.