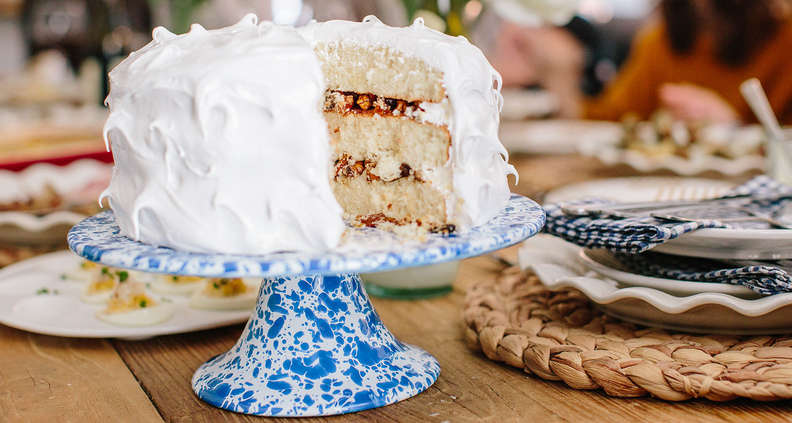 Hands On Time: 2 hours and 0 minutes

Using a stand mixer fitted with the paddle attachment, cream the butter, 1 1/4 cups sugar and vanilla on medium-high speed until light and fluffy. In a large bowl, sift together the flour, baking powder and salt. With the mixer on medium speed, add about one-third of the flour mixture, followed by half the buttermilk. Add another third of the flour mixture, followed by the remaining buttermilk and then the remaining flour mixture. Scrape down the sides and bottom of the bowl. Transfer mixture to a large bowl and clean out the bowl of the mixer.

Using the whisk attachment, whip the egg whites to soft peaks on medium-high speed. With the mixer running, add remaining 1/2 cup sugar and beat until mixture has reached stiff peaks. Fold the egg white mixture into the cake batter, then evenly divide between the prepared pans. Bake until a toothpick inserted in the center of the cakes comes out clean, 25 to 30 minutes. Let cool in the cake pans for 10 minutes, then carefully remove the cakes from the pans and transfer to a wire rack, top side up, to cool completely. Meanwhile, wash the stand mixer bowl and whisk, and make the filling.

To make the filling: In a medium saucepan, combine the rum, raisins and apricots and bring to a simmer over medium heat. Continue to simmer until the mixture is sticky and the rum has been absorbed. Remove from the heat and fold in pecans. Let cool to room temperature.

To make the frosting: Using a stand mixer fitted with the whisk attachment, beat the egg whites and cream of tartar to medium-stiff peaks on medium-high speed.

In a medium saucepan, combine the sugar, water, corn syrup and salt and place over medium heat. Bring to a boil without stirring to dissolve the sugar. Continue to boil, occasionally swirling the pan, until the mixture has reached 240 degrees (the soft ball stage). Turn the stand mixer to medium speed and, with the mixer running, slowly and carefully pour the syrup mixture into the egg whites. Add the vanilla, increase the speed to medium-high, and continue to beat until the mixture is opaque, billowy, thick and spreadable and the mixer bowl is cool to the touch.

To assemble the cake: Use a serrated knife to cut away any domed part of the cake layers, making three completely flat layers. Place one layer of cake down on a cake stand, cut-side-up, and spread with half of the filling mixture. Top with another layer of cake and evenly spread with remaining filling. Top with final layer of cake, cut-side-down, and press lightly to remove any pockets of air. Evenly spread frosting over the top and sides of the cake. Use an offset spatula to create peaks and swirls, if desired. Let sit for at least 30 minutes before slicing and serving.

Said to have originated in the early 20th century at Lady Baltimore’s Tea Room in Charleston, South Carolina, Lady Baltimore cake is a white cake filled with a mixture of dried fruit and nuts, then frosted with a meringue-like icing. It’s a labor of love, which is why many people around Charleston enjoy it as a wedding cake. It works equally well as a dessert for any festive occasion, be it Easter, Thanksgiving or Christmas.