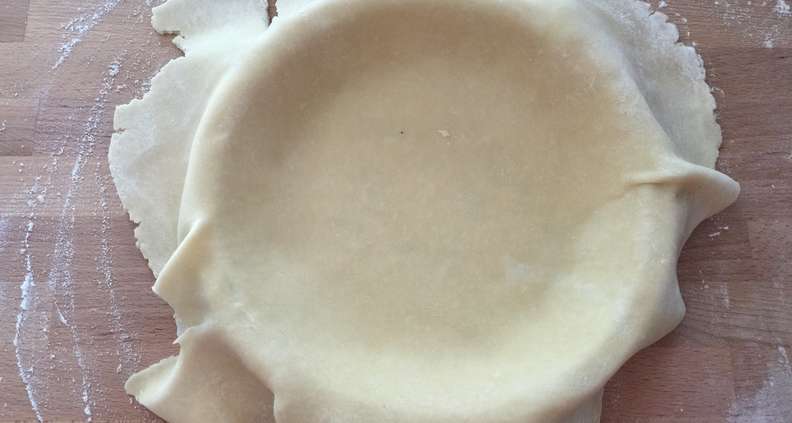 Serves: 8 to 16 (Makes enough dough for two 9-inch pies or one double-crust pie)

In a large bowl, combine the flour, sugar, and salt. Sift in the baking powder to ensure there are no lumps.

Using a stand mixer fitted with a paddle attachment, cream the butter and cream cheese until light and fluffy. Scrape down the sides of the bowl and the paddle. Add the flour mixture and mix just until the dough comes together.

Transfer the dough to a very lightly floured counter and knead until smooth, about 2 minutes. Cover with plastic wrap, and chill in the refrigerator until slightly firm, but not hard, 15 to 20 minutes.

Divide the dough in half and form each half into a ball. Roll each ball of dough into a disc just larger than the circumference of the pans. Line each pan with dough, taking care to trim off the excess. Chill in the refrigerator until ready to use.

To use for a double-crust pie, spray only one 9-inch pie pan with nonstick cooking spray. Divide the dough in half and form each half into a ball. Roll one ball of dough into a disk just larger than the circumference of the pan. Line the pan with dough and fill as directed in the recipe. Roll out the second ball of dough into a 10-inch round and place it on top of the pie. Crimp and cut the dough as directed in the recipe.

This pie crust recipe is incredibly user-friendly. The absence of liquid allows you to mix or knead the dough without fear of over-developing its gluten structure. The cream cheese adds a tangy richness that comes through in the baked pie crust. This crust is more on the tender side than it is flaky.

Once the pie dough is pliable, you’ll only need a tiny sprinkling of flour (mainly on the rolling pin), so you won’t run the risk of having the dough toughen up after absorbing too much excess flour.