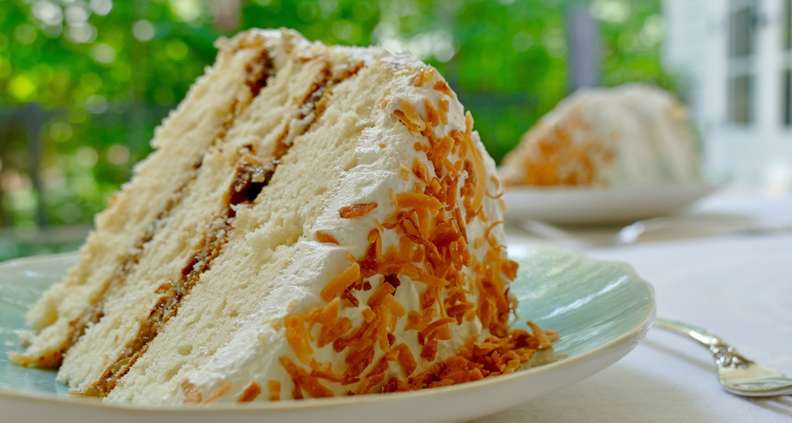 In a medium bowl, whisk together the flour, baking powder and salt. Using a stand mixer fitted with the paddle attachment, cream the butter and sugar until light and fluffy, 3 to 5 minutes. Add the vanilla and beat until combined, about 1 minute.

Add one third of the flour mixture, followed by half of the milk. Continue to add the flour and milk, alternating between the two, and ending with the flour. Beat well after each addition. Transfer to a separate bowl and wash the mixer bowl.

Using the now clean mixer bowl and the whisk attachment, beat the egg white until soft peaks form, 5 to 7 minutes. Add one third of the egg whites to the cake batter and mix thoroughly. Using a spatula, fold in the rest of the egg whites, one third at a time, until the eggs are well incorporated.

Divide evenly between the prepared cake pans and lightly tap each pan on the counter to release any air bubbles. Bake until a toothpick comes out clean from the center of each cake, 18 to 22 minutes. Let cool in the pans for 10 minutes, then remove the cakes and let cool completely on a wire rack.

While the cakes are cooling, prepare the filling: In a medium saucepan, melt the butter over medium-low heat. Whisk in the sugar and egg yolks and cook, whisking constantly, until thickened, 7 to 10 minutes. Remove from the heat and stir in the remaining filling ingredients. Let cool completely.

Once the cakes and filling have cooled, place one cake layer on a cake stand or plate of choice. Spread half of the filling evenly over the cake layer. Add another cake layer on top, followed by the remaining filling and final cake layer. Wrap tightly with plastic wrap and refrigerate for 12 hours.

The next day, remove the cake from the refrigerator while making the frosting: Using a double boiler, bring 2 inches of water to a boil in the bottom pot. Add the sugar, water, egg whites and cream of tartar to the top of the double boiler.

Using a handheld mixer, beat the ingredients on low for 30 seconds, then increase the speed to high and beat until light and fluffy, about 7 minutes. Immediately frost the sides and top of the cake. Decorate with toasted coconut flakes, if using, and serve.

A classic Southern recipe, Lane Cake (or Alabama Lane Cake) is a layered sponge cake with a boozy raisin-coconut filling and topped with a pillowy white frosting. Named after its creator, Emma Rylander Lane, who entered the cake in a county fair baking competition in the late 19th century, the cake rose to fame when it was mentioned in another Southern classic, To Kill a Mockingbird. This recipe takes some effort in the kitchen, but the end result of a flavorful and moist showstopper cake is worth the time, and it only gets better with age.