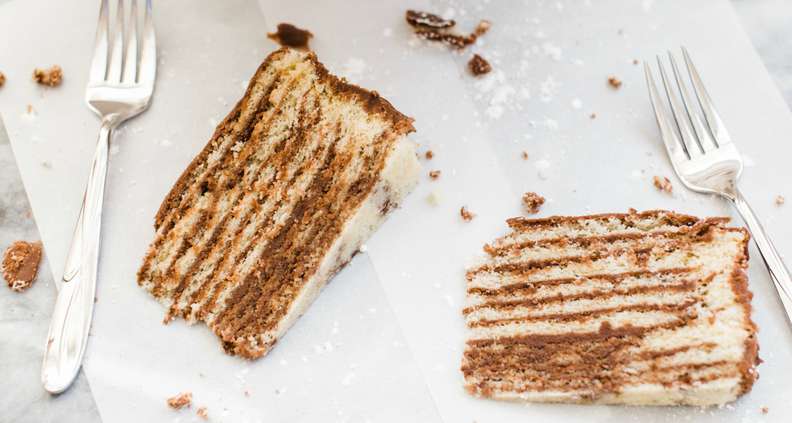 Hands On Time: 3 hours and 0 minutes

To make the cake: Heat the oven to 350 degrees. Spray two or three 9-inch cake pans with vegetable oil spray or grease with butter.

In a medium bowl, sift together the flour, baking powder and salt.

In the bowl of a stand mixer fitted with the paddle attachment, cream together the sugar, butter and shortening on medium-high speed until light and fluffy, 3 to 5 minutes. Beat in the eggs, one at a time, until creamy.

Add a heaping 1/4 cup of the batter into each of the prepared pans. You should have just enough batter to just barely cover the entire bottom of the pan. It looks very thin but will rise when baked.

Bake until the cakes have just risen a tad and are firm to the touch, about 10 minutes. Don’t let the cakes brown. Let the cakes cool in the pans for 5 minutes, and then transfer to a wire rack to cool completely. Repeat with the remaining batter. You should have at least 10 baked layers.

To make the frosting: Sift the sugar and cocoa into a medium saucepan. Add the evaporated milk and butter. Place over medium heat and cook, stirring occasionally, until the sugar and butter melt and the mixture begins to boil. Continue to boil, stirring, for 4 minutes. Remove from the heat and stir in the vanilla. Continue to stir until the vanilla is fully incorporated. If necessary, keep warm over very low heat while you assemble the cake.

To assemble the cake, place one layer on a cake plate. Spread about 1/4 cup of the warm frosting over the top of the cake. It will soak into the cake; this is okay. Place a second cake layer on top, followed by more frosting. Repeat with the remaining cake layers. By the time you stack the top layer, the frosting should be cool enough to spread across the top of the cake and not sink in. Top with additional pecans, if desired.

Let the cake sit for at least 2 hours to let the fudge set before serving.

Little layer cakes have an air of austerity, like the stack cake, with a bit of sweet flair from the chocolate frosting. This recipe calls for a classic yellow butter cake batter, studded with pecans, and stretched with a bit of Crisco. The thick, fudgy frosting gets its color from a touch of cocoa — just enough so that you know its there.

If you're worried about having enough frosting to spread between layers, you can double the fudge portion of the recipe. If you can't find White Lily Flour, you can use Swan's Down cake flour or another cake flour. To streamline the process, you can boil the frosting while you bake the cakes, and assemble as each cake comes out of the pan; be aware that this will likely create more of a mess.