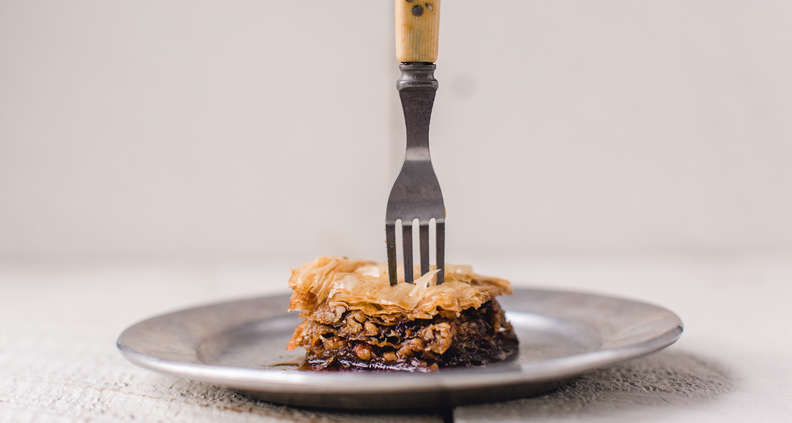 Hands On Time: 2 hours and 0 minutes

Heat the oven to 350 degrees. Spread the bottom and sides of a 9- by 13-inch baking dish with some of the melted butter.

In a medium bowl, toss the pecans with the cinnamon.

Carefully unroll the phyllo dough, taking care not to tear the dough. Cut the entire stack of dough to fit the shape of the baking dish. (Keep the phyllo covered with a damp dish towel to prevent dough from drying out as you’re working.)

Lay two sheets of dough in the bottom of the dish. Generously brush the dough with more of the melted butter. Repeat until you have layered eight sheets. Sprinkle 1/4 cup of the nut mixture and 2 tablespoons of chocolate chips on top of the dough. Repeat with two more sheets of dough, butter, nuts and chocolate. Continue layering until you have filled the baking dish, making sure that the top layer is six sheets deep.

With a very sharp knife, cut into 12 equal squares, taking care to cut completely through to the bottom layer of dough. Bake until the baklava is browned and crisp, about 1 hour.

While the baklava bakes, make the sauce: In a medium saucepan, combine the water, sugars, corn syrup, molasses and salt. Bring to a simmer and cook until syrupy, about 15 minutes. Stir in the vanilla.

When the baklava is golden brown and crisp, immediately pour the syrup mixture on top. Let sit at room temperature for at least 2 hours before serving.

Inspired by the pie named after that famous horse race at Churchill Downs, this dessert takes all the elements of a chocolate pecan pie, but reimagines them in the form of Greek baklava. Not just a fun gimmick, this preparation allows you to turn pecan pie into a handheld dessert. When hosting a crowd, you can serve the individual baklava squares on cupcake wrappers.

Phyllo dough can be tricky to work with. For best results, let the phyllo thaw on the countertop while still in the packaging. Carefully unwrap, then cover with a damp dish towel while you’re working to keep the dough moist.