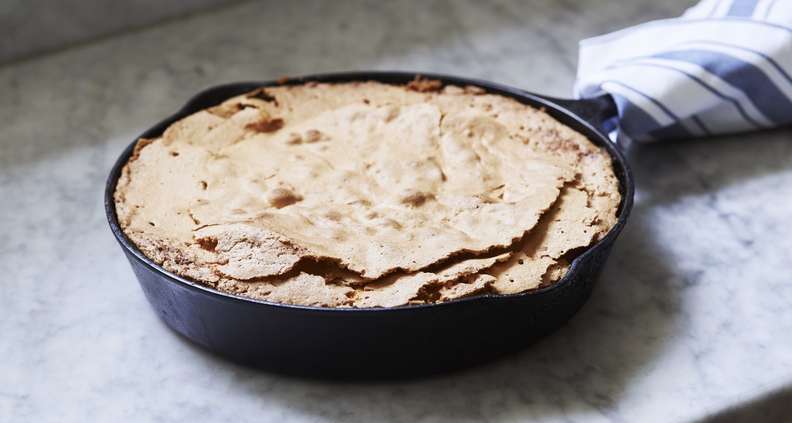 Place a rack in the center of the oven, and heat the oven to 325 degrees. Grease a 12-inch cast iron skillet with the softened butter.

Place the room temperature butter and salt in a large mixing bowl, and beat with an electric mixer on medium-low speed until the mixture is creamy, about 1 minute. Add the sugar, gradually, while beating on medium-low. Increase the mixer speed to medium once all the sugar has been incorporated, and beat until pale in color, about 1 minute. Reduce the mixer speed to low and add the eggs, one at a time. Beat until each egg is throughly incorporated. Scrape down the sides of the bowl with a rubber spatula.

With the mixer still on low speed, add one-third of the flour, followed by half of the cream, mixing until combined. Mix in another third of the flour, followed by the remaining cream, and then the remaining flour. Mix in the vanilla and scrape down the sides of the bowl. Turn the batter into the prepared pan, smoothing the top with the rubber spatula.

Bake the cake until the top is golden brown and crackly, 65 to 70 minutes. Remove the pan to a wire rack to cool at least 1 hour.

Run a knife around the edges of the pan, give the pan a good shake, then invert the cake once, then again, so that the cake rests right-side up on the rack. Let it cool on the rack at least 1 hour before serving. (To store, wrap in aluminum foil or place in a cake saver, and store for up to five days. Alternatively, wrap in foil and freeze for up to six months.)

Baking pound cake in a cast iron skillet lends a tender, moist crumb to the cake and gives the exterior a beautifully crisp crust.

This recipe was based on John Egerton's pound cake recipe. Anne Byrn tweaked the recipe by cooking it in cast iron. Read more about how she developed the recipe in our full story.