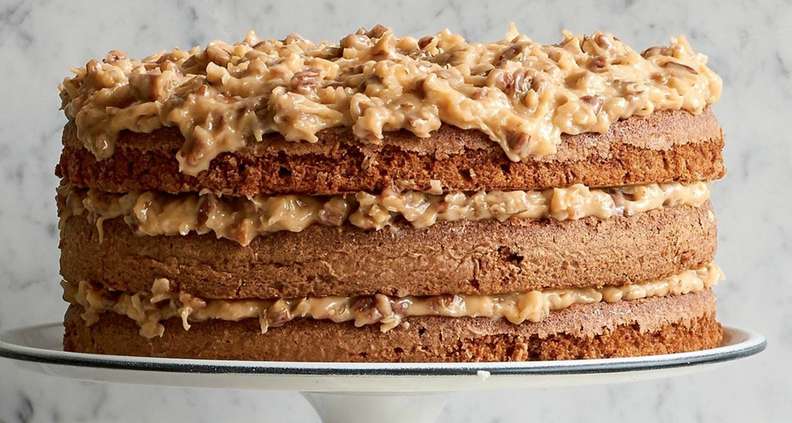 To make the cake: Place a rack in the center of the oven, and heat the oven to 350 degrees. Lightly grease and flour three 9-inch cake pans, and shake out the excess flour.

In a large bowl, sift together the flour, baking soda and salt. In a small bowl, cover the chocolate with the boiling water. Stir to melt the chocolate.

In a second large bowl, cream together the sugar and butter using an electric mixer on medium spead. Continue to beat until light and fluffy, about 2 minutes. Add the egg yolks, one at a time, beating well after each addition. Beat in the vanilla. Alternately add the flour mixture and buttermilk to the batter, blending on low speed, and beginning and ending with the flour mixture. Fold in the melted chocolate.

In a third large bowl, beat the egg white with clean beaters on high speed until almost-stiff peaks form, about 4 minutes. Fold the egg whites into the batter. Divide the batter between the three reserved pans.

Bake the cakes until they spring back with lightly pressed in the center, 28 to 32 minutes. Let the cakes cool in the pans for 15 minutes. Run a knife around the edges of the pans, and gently shake to loosen the cakes. Invert the cakes once and then again onto the racks to cool completely right-side up, about 45 minutes.

To make the filling: In a large saucepan, combine the evaporated milk, sugar, egg yolks, butter, vanilla and salt. Place over medium heat and cook, stirring constantly, until the mixture thickens and is caramel in color, about 15 minutes. Remove from the heat and stir in the coconut and pecans. Let the mixture cool until it is thick enough to spread. (You can refrigerate the filling while the cake layers cool. Or to speed the process along, you can make the filling before you bake the cake.)

To assemble, place one cake layer on a serving plate and cover with 1 cup of filling, spreading it to the edges. Top with the second layer and repeat. Top with the third layer, and pile the remaining filling on top, leaving the sides bare. Refrigerate for 1 hour before serving.

German chocolate cake uses canned evaporated milk to make its cooked filling and frosting velvety in texture. Added to the eggs, butter and sugar, along with the chopped pecans and coconut, the filling is cooked slowly over low heat and thickens almost into a pudding. After cooling, it is spread between three layers of German chocolate cake and piled generously on top, with, hopefully, just enough left over to sneak a big, spoon-filled taste. Honest-to-goodness and unapologetically rich, it is a cake that smacks of the late 1950s.

If you use lightly salted butter, reduce the salt in the cake to 1/4 teaspoon, and omit the salt from the filling. This recipe works best with unsweetened coconut, but if you cannot find it, sweetened will do. Pecans are much more delicious if toasted first. Place them on a baking pan in the turned-off oven after you remove the cakes. When they are medium-brown and fragrant, after 3 to 5 minutes, remove from the oven and chop.

Read more in "Taste of a Place: Anne Byrn explores the secret ingredient in desserts from the South's most remote places."

The recipe was originally published in "American Cake: From Colonial Gingerbread to Classic Layer, the Stories and Recipes Behind More Than 125 of our Best-Loved Cakes" by Anne Byrn (Rodale, 2016).