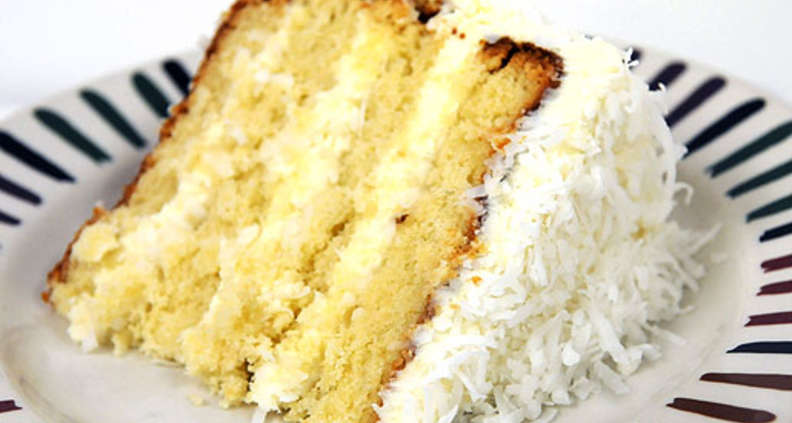 To make the pudding: In a medium saucepan, whisk together the granulated sugar, all-purpose flour and salt.

In a medium bowl, whisk the yolks until smooth, then slowly whisk in the milk. Slowly whisk the milk mixture into the dry ingredients in the saucepan until no lumps remain.

Place the saucepan over medium heat and stir in the butter. Cook, stirring constantly to prevent scorching, until the pudding thickens and begins to boil.

Remove the saucepan from the heat and stir in the vanilla. Transfer the pudding to a large bowl and let cool to room temperature. Once cool, measure out and reserve 1 cup of the pudding for the cake. Save the remaining pudding for another use.

To make the cake: Heat the oven to 325 degrees. Butter two 9-inch round cake pans. Line the bottoms of the pans with parchment paper and butter the parchment.

In a small bowl, sift together the cake flour, baking powder and salt.

In a large bowl, whip the cream with an electric mixer until it forms soft peaks.

In a second large bowl, cream the granulated sugar and butter using the electric mixer until they turn pale yellow. With the mixer running, slowly drizzle in the vegetable oil and continue to beat until well-combined. One at a time, beat in the whole eggs, followed by the egg yolks, until well-combined, scraping down the sides of the bowl after each addition. Beat in the buttermilk and vanilla.

With the mixer on low speed, gradually beat in the flour mixture until just combined. Using a spatula, fold in the reserved 1 cup pudding and the whipped heavy cream.

Divide the batter between the prepared pans. Bake until the cake begins to pull away from the sides of the pan and springs back when lightly touched in the center, 35 to 40 minutes. Cool the cakes in the pans for 10 minutes, then invert onto wire racks and cool completely.

While the cakes are cooling, make the frosting: With an electric mixer, cream together the cream cheese and the butter until well-combined. Add the powdered sugar and beat until lightened and spreadable. Beat in the vanilla and lemon juice.

To assemble the cake: Place one cake layer upright on a serving platter. Spread about 1 cup of the frosting evenly over the top of the cake. Sprinkle with 1/2 cup of the coconut. Top with the second layer; cover the top and sides with the remaining frosting. Press the remaining coconut onto the top and sides of the cake to cover the frosting completely. Serve.

For the coconut cake connoisseur, this recipe will become a favorite labor of love. It starts with a moist, dense yellow cake, featuring homemade vanilla pudding, which is then frosted with gobs of cream cheese frosting and topped with freshly shaved coconut.

You can make the pudding a day ahead of the cake; just bring it to room temperature before adding it to the batter. The pudding recipe makes 2 cups, twice as much as you'll need for the cake. It'll serve about four as a stand-alone dessert.