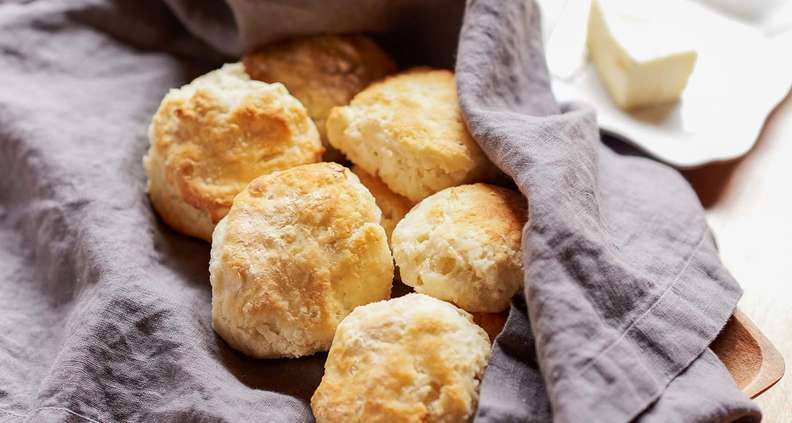 Heat the oven to 500 degrees. Line a rimmed baking sheet with a nonstick silicone baking sheet.

In a large bowl, combine the flour, baking powder and salt. Using a pastry cutter or two knives, cut the butter into the flour mixture until it resembles coarse meal. Pour in the buttermilk, and gently mix until just combined.

Turn the dough out onto a lightly floured surface. Knead lightly, using the heel of your hand to compress and push the dough away from you, then fold it back over itself. Give the dough a small turn and repeat 8 or so times. (It’s not yeast bread; you want to just barely activate the gluten, not overwork it.) Using a lightly floured rolling pin, roll the dough out 1/2 inch thick. Cut out rounds of dough with a 2 1/4-inch round cutter dipped in flour; press the cutter straight down without twisting so the biscuits will rise evenly when baked.

Virginia Willis: "Wheat flour contains two proteins, glutenin and gliadin. When you combine flour with water, the proteins create a strong and elastic sheet called gluten. Flours vary in their protein levels, which affects the texture of baked goods. Gluten gives structure to yeast breads, but is not recommended for tender biscuits.

Southern all-purpose flour is milled from soft red winter wheat that has less gluten-forming protein. It is typically bleached, which makes it whiter, but this does not affect the protein. My mother and grandmother always used White Lily flour. Most national brands of all-purpose flour are a combination of soft winter wheat and higher-protein hard summer wheat. White Lily contains approximately nine grams of protein per cup of flour, whereas national brands can contain eleven or twelve grams of protein per cup of flour.

This recipe was originally published May 11, 2017, in a Mother's Day story written by Virginia Willis for Southern Kitchen.