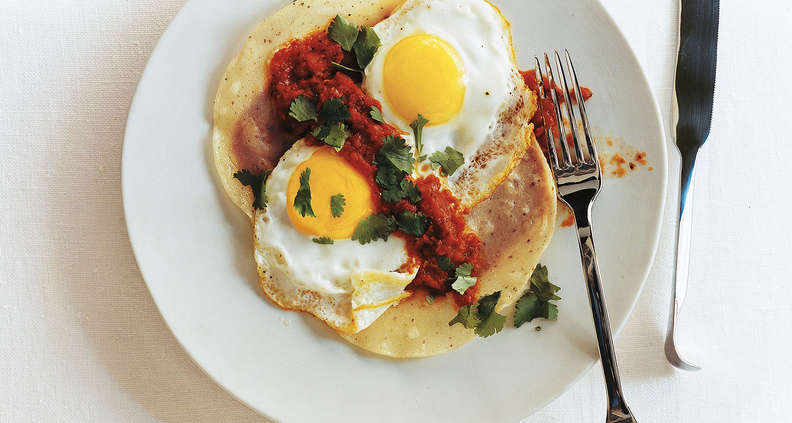 In a medium bowl, beat the eggs with a hand mixer (and, if desired, add pat of butter or 1/2 cup heavy whipping cream for richer eggs).

In a large nonstick skillet, cook the bacon over medium-high heat until crisp. Use a slotted spoon to transfer to a paper towel-lined plate. In rendered fat left in the pan, add the potatoes and onion. Season with salt and pepper and cook, stirring frequently, until the potatoes are tender and the onions are translucent.

Drain off all but about 1 tablespoon of oil from the pan, reduce the heat to low, and add the eggs. Cook slowly until fluffy and just cooked through.

Meanwhile, heat the tortillas in a cast iron skillet. Serve the egg mixture in the hot tortillas, sprinkled with cheese.

In the 1980s, late Tamale House founder Robert Vasquez noticed that, while Austin was mainly populated by sit-down Mexican restaurants, Southern California was full of small roadside stands selling tacos. Following their lead, he launched his now-famous taco house, which still maintains its popularity with a simple menu of breakfast tacos priced at just over a dollar.