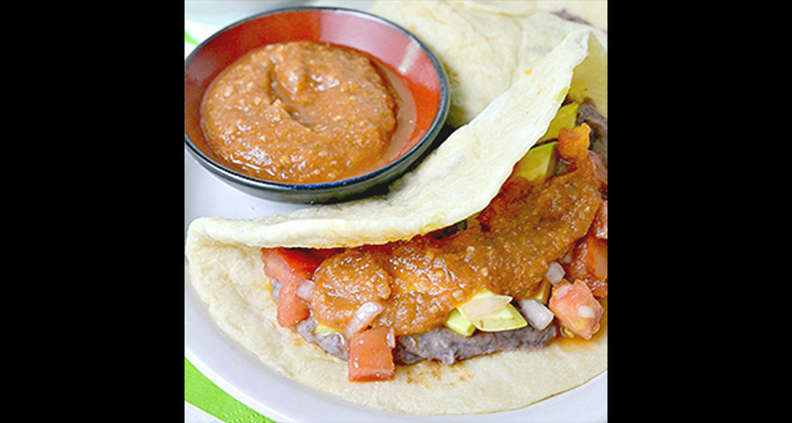 To make the Doña Sauce: Heat a broiler to high. Spread the peppers, cut side-down, and the garlic out in an even layer on a foil-lined baking sheet. Broil until charred. Transfer to a blender with the oil and salt. Puree until smooth and transfer to a medium bowl. Season with salt. Keep the broiler on and rinse out the blender.

To make the Salsa Roja: In a large bowl, combine the tomatoes, jalapeño, onion slices, garlic and oil. Stir to mix well, then transfer to a second foil-lined baking sheet. Broil until charred. Transfer to a blender with the cilantro and salt. Blend until smooth and season with salt.

To make the Creamy Black Beans: Heat the oil in a large skillet over medium heat. Add the onions and cook, stirring frequently, until they soften and begin to brown. Add the garlic and continue to cook until fragrant. Add the beans and milk to the skillet. Using a fork or potato masher, mash the beans as well as you can. They don't need to be completely mashed, just enough to release some starches to thicken the mixture. Using an immersion blender or food processor, puree until creamy. Season with salt and keep warm.

To make the tacos: Preheat a cast iron skillet and warm tortillas for about five seconds per side, until malleable. Once warm, top tortillas with black beans, avocado slices, pico de gallo, and plenty of Salsa Roja and Doña sauce.

Robert Espinosa is a key figure in explaining how breakfast tacos became an everyday, anytime meal in Austin. Since 1999, the Tacodeli founder has been expanding his empire across Texas, first taking over Austin then pushing out into Dallas and now planning a location in Houston. While they were popular from the start, Espinosa’s tacos exploded when they began popping up in coffee shops across the city. Nestled inside their own portable taco warmer, they are now available all over Austin at all hours of the day.