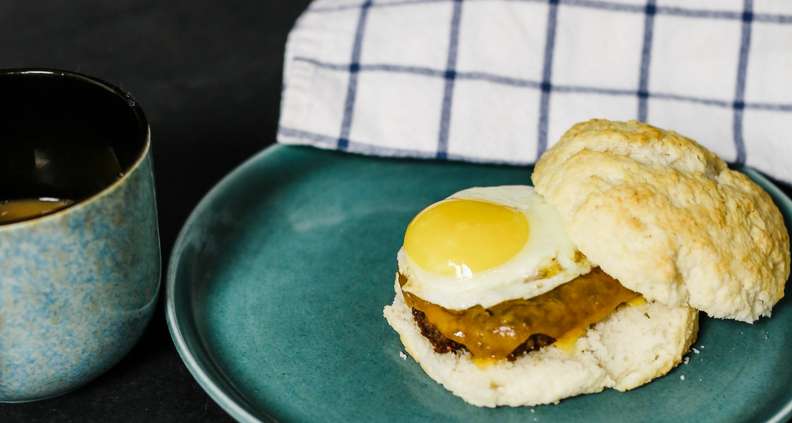 To make the biscuits: Heat the oven to 425 degrees. Line a baking sheet with parchment paper.

In a large bowl, sift together the flour, salt, baking powder and baking soda and stir until combined. Using a pastry cutter or your fingers, cut the shortening into the flour mixture until the mixture resembles coarse crumbs. Work as quickly as possible to keep the fat cold.

Turn the dough out onto a lightly floured work surface. Lightly dust the top of the dough with flour and fold the dough over on itself five or six times. Use your hands to press the dough into a 1 1/2-inch-thick round.

Brush the tops of the biscuits with melted butter and bake until risen and golden brown, 20 to 25 minutes. Transfer biscuits to a cooling rack.

To make the sandwiches: Heat the vegetable oil in a large nonstick skillet over medium heat. While the oil is heating, divide the sausage into four equal portions and form into small patties.

When the oil is hot, cook the sausage until browned and no longer pink in the center, about 5 minutes per side. Transfer the sausage to a plate and cover each patty with a slice of cheese. Wipe out the skillet.

Split open the biscuits and place one cheese-covered sausage patty on the bottom half of each biscuit.

Melt 1 tablespoon of the butter in the now-clean skillet over medium heat. When the butter is foamy, crack two eggs into the skillet, lightly season with salt and pepper, and cook until the white is firm but the yolk is still runny, about 3 minutes. Transfer to two of the sausage patties. Repeat with the remaining butter and eggs.

Keeping your fat and liquid, as well as your equipment, cold will ensure a fluffier biscuit with a greater rise. Use full-fat buttermilk for a richer biscuit, as well. White Lily flour is milled from soft winter wheat, and also contributes to a fluffier, more tender biscuit. You can also use regular all-purpose flour if that is all you can find.