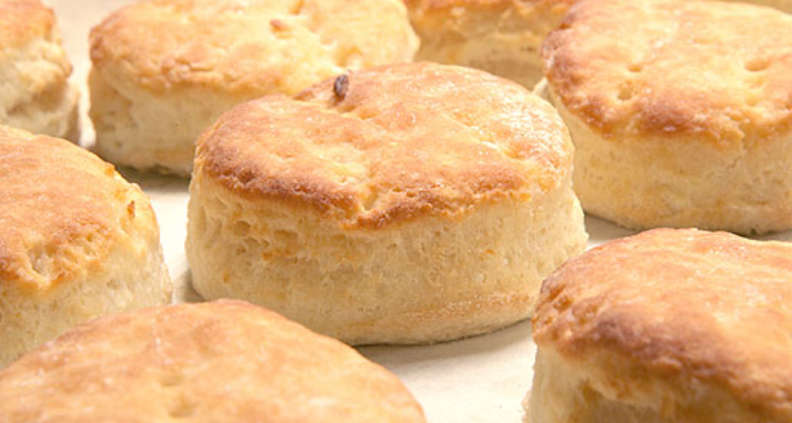 To make the baking powder: Sift together three times the cream of tartar and baking soda. Transfer to a clean, dry, tight-sealing jar. Store at room temperature, away from direct sunlight, for up to four weeks. Use in any recipe calling for commercial baking powder.

To make the biscuits: Heat the oven to 500 degrees. Put the flour, homemade baking powder and salt in a large bowl. Whisk well to thoroughly blend. Add the lard and, working quickly, coat in flour and rub between your fingertips until about half the lard is coarsely blended and the other half remains in large pieces about 1/2 inch in size.

Make a well in the flour mixture and pour in the buttermilk. Stir quickly, just until the dough is blended and begins to mass. The dough should be soft and a bit sticky and there should not be large amounts of unincorporated flour in the bowl. If dough is too dry, add a few tablespoons more buttermilk.

Turn the dough immediately onto a generously floured surface, and with floured hands, knead briskly 8 to 10 times until a cohesive dough is formed.

Gently flatten the dough with your hands so it is of an even thickness. Then, using a floured rolling pin, roll it out to a uniform thickness of 1/2 inch. (If the dough begins to stick to your rolling pin, dust the pin — not the dough — with flour. Flouring the dough at this point will result in dusty-looking biscuits.) With a dinner fork dipped in flour, pierce the dough completely through at 1/2-inch intervals.

Lightly flour a 2 1/2- or 3-inch biscuit cutter and stamp out rounds. (Do not twist the cutter when stamping out biscuits.) Cut the biscuits from the dough as close together as you can for a maximum yield. Arrange cut biscuits on a heavy, ungreased or parchment-lined baking sheet so that they almost touch. Do not re-roll the scraps. Just bake as is and enjoy as a treat.

Bake in the upper third of the oven until crusty golden brown, 8 to 12 minutes. (Check about 6 minutes into baking and rotate the pan if needed to ensure even cooking.) Remove from the oven and brush with melted butter. Serve hot.

"Biscuits are the stuff of legend. The mere mention of them conjures images of hearth and home, kindly grandmothers and good-smelling kitchens. A particularly well-made biscuit has been known to inspire proposals of marriage.

People love eating biscuits. They love talking about biscuits. But when it comes to making them, the sad truth is that many people, even Southerners, are often too afraid to try. Experience has taught me that, in the end, a good biscuit really boils down to a few basics: mainly a hot oven, cold fat and a gentle but knowing hand.

But it's the details that make a great biscuit, and simple as they are, they are important and should be followed closely. To my taste, a biscuit should be crusty and golden brown on the top and even lightly browned on the bottom with an interior that is soft, light and tender but not too fluffy. It should be slightly moist, but not so moist that it becomes gummy when you eat it, and dry enough to absorb a pat of good butter as it melts. It should be flavorful and well-seasoned, with a slight buttermilk tang, pleasing on its own but an excellent vehicle for other flavors as well.

Ratio of crusty exterior to soft interior is important, and I'm no fan of those big, Hollywood-pumped-up-on-steroids-looking biscuits. I prefer a biscuit no larger than three inches or so in diameter and not much more than an inch in height." -- Chef Scott Peacock