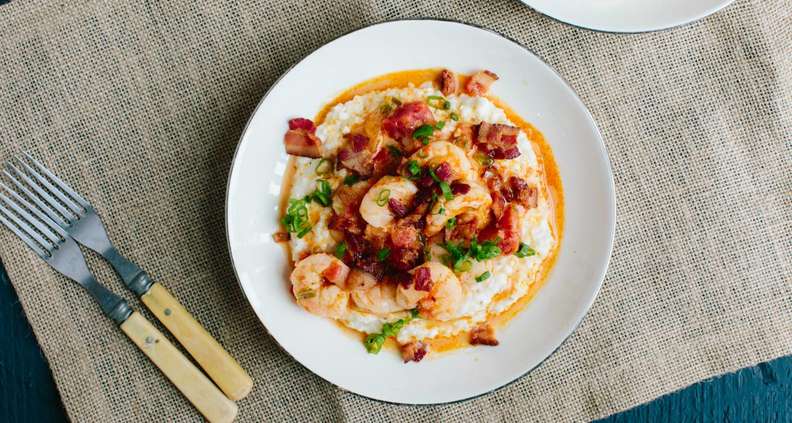 In a medium bowl, toss the shrimp with the Old Bay.

Add the bacon to the Instant Pot and turn on the saute function. Cook, stirring frequently, until the fat has rendered and the bacon is crisp, 10 to 15 minutes. Transfer to a paper towel-lined plate.

Add the onions and peppers to the pot and cook, stirring occasionally, until soft and translucent, 5 to 7 minutes. Add the white wine, stirring to remove any browned bits from the bottom of the pot. Stir in the tomatoes, chicken broth and lemon juice. Turn off the saute function.

In a medium glass bowl that will fit inside the Instant Pot, whisk together the water, milk, grits, 2 teaspoons salt and 1/4 teaspoon pepper. Place the Instant Pot trivet on top of the gravy mixture and place the bowl on top of trivet.

Cover, select the manual option, and set the timer for 30 minutes.

Release the pressure. When the steam stops, remove the lid, the bowl of grits and the trivet. Whisk the butter into the grits. Stir the shrimp and cream into the gravy and allow the residual heat to cook the shrimp through, stirring occasionally, for about 5 minutes. Season to taste with salt and pepper.

To serve, spoon the grits into bowls and top with the shrimp and gravy. Garnish with crisp bacon and sliced scallions.

Surprisingly, you can make excellent shrimp and grits in an Instant Pot. The secret is to save the shrimp until the very end of cooking and to cook the grits in a bowl atop the gravy. Cooking the grits this way eliminates the need to stand over a pot, whisking for 45 minutes, and it allows them to become infused with the flavors of the gravy. This recipe is also basically a one-pot meal — there’s no need to wash a skillet and a saucepan afterward.

We developed this recipe in an Instant Pot, but you can also use a different brand of pressure cooker. Cook the pork on high pressure and use the quick-release after 90 minutes.

You can purchase an Instant Pot from Amazon here.

Southern Kitchen may make commission on products we don't carry in our Shoppe. All opinions and recommendations are our own and are not influenced by advertisers.