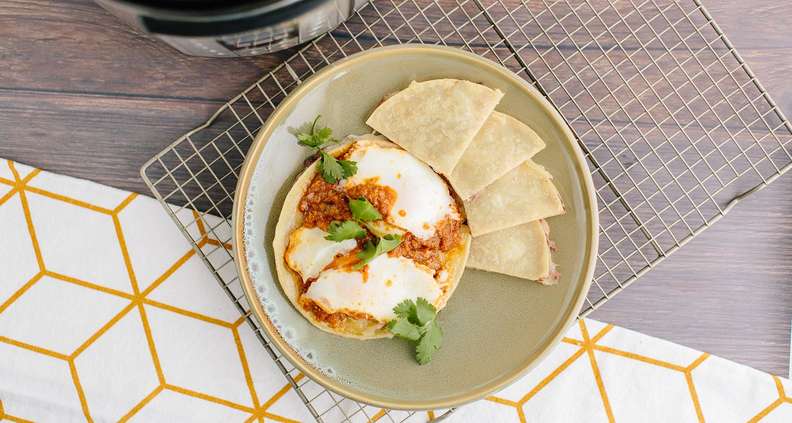 To make the ranchero sauce: Heat the oven to 250 degrees.

In an Instant Pot, combine the tomatoes, tomato juice, water, onion, peppers, oil and cumin. Season with salt and pepper, seal the lid, and cook for 20 minutes on the manual setting.

When the timer sounds, use the quick release to release the pressure. Use an immersion blender to puree the sauce. Season to taste with salt and pepper.

Meanwhile, make the quesadillas: Evenly spread 2 tablespoons of the beans on four of the tortillas. Divide the cheese evenly between the tortillas, then top with the remaining tortillas.

Melt 1 tablespoon of butter a nonstick skillet over medium heat. When the butter is foamy, add one quesadilla. Cook until lightly browned and cheese has melted, 3 to 4 minutes per side. Transfer to a baking sheet and place in the oven to keep warm. Repeat with remaining quesadillas.

To finish: Crack the eggs directly into the puréed sauce in the Instant Pot, spacing them as evenly apart as possible. Seal the lid and cook on manual for an additional 2 minutes. Use the quick release to release the pressure and serve with the quesadillas and fresh cilantro.

True huevos rancheros can be time-consuming because of the time necessary to develop the deep flavors in a sauce that’s meant to simmer for at least 2 hours. With an Instant Pot, you can cut the cooking time significantly by using the pot’s pressure cooker functionality. Traditionally, the eggs in huevos rancheros are poached in the finished sauce, and you can do the same using the Instant Pot.

Instead of serving this dish with refried beans and tortillas on the side, we like to make the dish even easier to eat by building quesadillas with those traditional side dishes. You can make these in the time it takes for the sauce to cook in the Instant Pot.