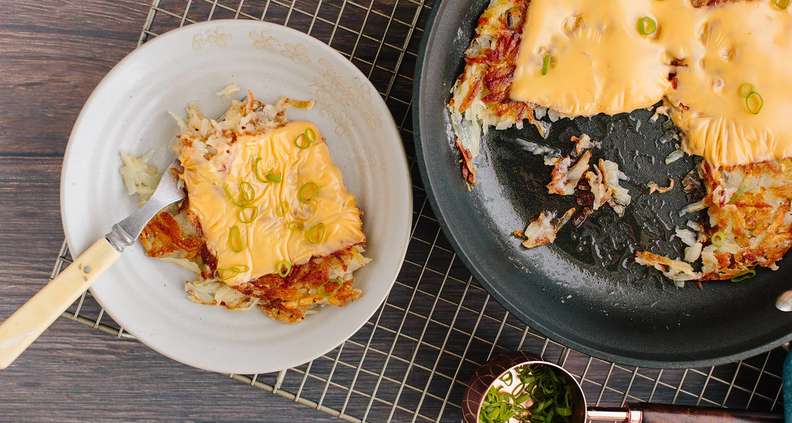 Melt 2 tablespoons of the butter in a large nonstick skillet over medium heat. Season the potatoes generously with salt and pepper, then press into the skillet. Let cook without disturbing the skillet until the bottom of the potatoes is golden brown and crisp, 5 to 7 minutes.

Flip the potatoes out onto an inverted plate, then slide the potatoes, browned side-up, back into the skillet. Place small pieces of the remaining butter around the perimeter of the pan, transfer to the oven, and bake until the bottom is once again browned and crisp, and the center of the potatoes are cooked through. Add the cheese and onions, if desired, and bake until melted and warmed through, about 1 minute. Serve immediately.

If you’re a fan of the 24-hour diner, you’re sure to love these hash browns topped with American cheese. The key to success lies in removing as much of the starch from the potatoes as possible for that fluffy texture, then drying the potatoes as thoroughly as possible so that they can become browned and crisp. If you want to add onions, you may want to cook them in a separate skillet. As onions cook, they give off water, which will inhibit browning.