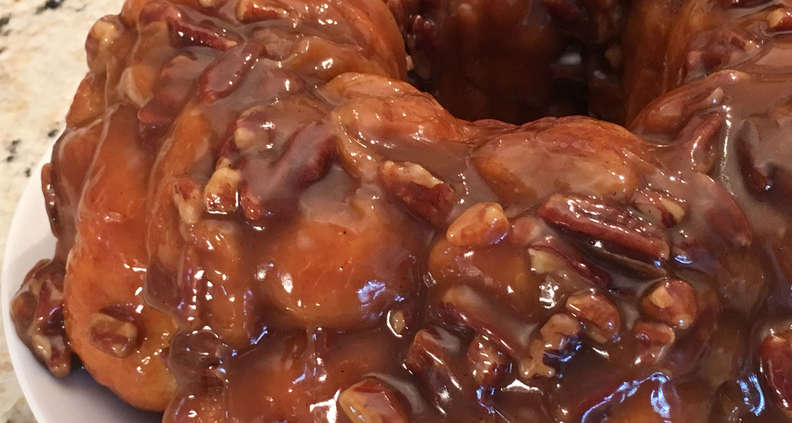 In a small bowl, mix together the granulated sugar and cinnamon.

In a medium saucepan or cast iron skillet, melt the butter over medium heat. Add the brown sugar and salt, and cook until the sugar has begun to dissolve. Whisk in the the heavy cream, bring to a low simmer, and cook, stirring occasionally, until the sauce has thickened, about 10 minutes. Remove from the heat.

Open the biscuit dough and press each biscuit into a flattened disk. Sprinkle some of the cinnamon sugar on top, then place a cube of cream cheese in the center. Form the dough into a golf ball-sized ball, then repeat with the remaining biscuits.

Bake until the biscuits have risen and are cooked through, about 45 minutes. Let cool for 10 minutes. Turn the bundt pan upside down onto a plate, and serve warm.

We've updated the traditional monkey bread by stuffing the center with cream cheese. The addition of cream to the caramel sauce gives it a toffee-like richness. We tried this recipe with both homemade and canned biscuit dough, and found that the canned biscuit dough yielded a more successful result. Look for biscuit dough that is not labled "flaky."