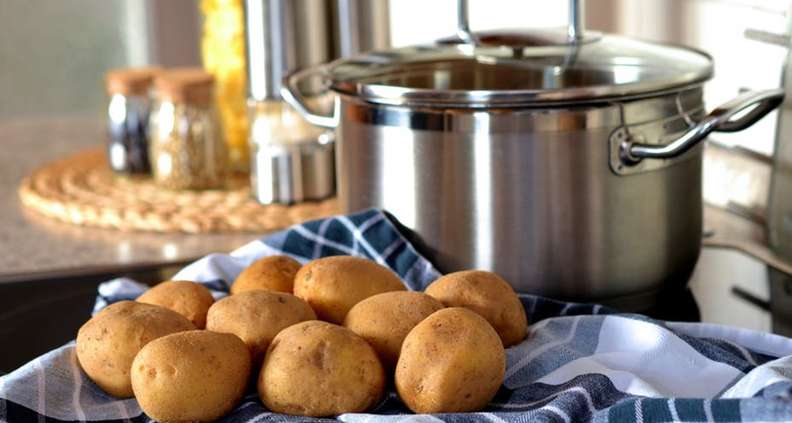 Wrap the potatoes in aluminum foil and bake until completely cooked through, about 1 hour. Unwrap and letto cool. Once the potatoes have are cool enough to touch, peel, then slice into 1/2-inch-thick coins.

In an 8-inch cast iron skillet, render the bacon over medium heat. When the bacon is almost crispy, add the onions. Stirring occasionally, cook until the onions are gently caramelized, about 20 minutes. Remove half of the bacon-onion mixture from the skillet and set aside.

Evenly distribute the remaining bacon and onions across the bottom of the skillet. Arrange a single layer of the sliced potatoes on top of the onions, then season with salt and pepper. Top with half of the cheese, followed by the remaining bacon-onion mixture. Arrange the rest of the potatoes in another layer, season with salt and pepper, then evenly spread with sour cream.

Top with the remaining cheese, then bake until cheese is melted and golden brown, 20 to 30 minutes. Remove from the oven, let rest for 15 minutes, then serve.

Loosely based on a French "tartiflette," this casserole can function as part of a hearty brunch or breakfast, or could serve as a simple entree with a green salad and some cornichons.

The potatoes actually work better if baked the day before. When rendering bacon, it’s important to always start with a cold pan. With a hot pan, the outside of the bacon will crisp (and potentially burn) while the inside is still chewy. Feel free to substitute any cheese you like, or even opt for a combination of cheeses.