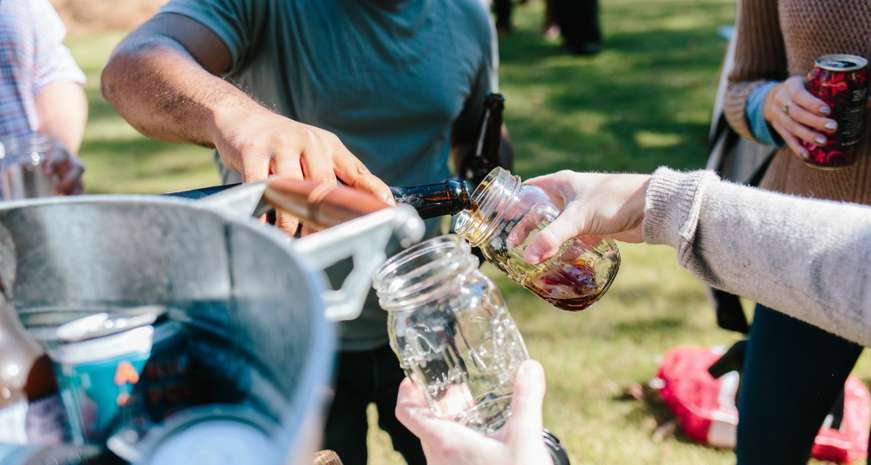 Whether you’re up or you’re down, you prefer whiskey or gin, you’re dressing up for a night on the town, or all about staying home in your jammies, here’s a soundtrack to accompany your fall imbibing.

Don't forget to scroll down to the bottom for a ready-to-listen list of each of the songs below.

1. Deer Tick: “Let’s All Go to the Bar”
When isn’t it a good time to go to the bar? Never, according to this boisterous anthem from the Rhode Island-based alt-rockers.

2. The Wood Brothers: “I Got Loaded”
Wine? Check. Gin? Check. Whiskey? Check. This track from the Nashville-based folk trio references a trifecta of potent potables.

3. Margo Price: “Since You Put Me Down”
“A fifth of Evan Williams,” “a handle of tequila” and “a bottle of the Bulleit” are just a few of Price’s favorite post-breakup things in this track from her acclaimed debut album.

4. John Lee Hooker: “One Bourbon, One Scotch, One Beer”
All good booze comes in triplicate, at least according to this bluesy classic.

5. Kendrick Lamar: “Swimming Pools (Drank)”
While filling with your pool with liquor may not be in the budget for your next party, adding this track to your playlist is free of charge.

6. The Replacements: “Here Comes a Regular”
Here's an ode to the neighborhood bar and the people who take care of you when it’s just too depressing to go home; or, an emo Cheers.

7. Joni Mitchell: “A Case of You”
While we wouldn’t wish a breakup on anyone, we’re grateful for Mitchell’s split from Graham Nash (of Crosby, Stills and Nash) because it resulted in this exquisite and haunting tune.

8. Aaron Lee Tasjan: “The Trouble with Drinkin’”
Modern day troubadour Tasjan gets at the crux of imbibing: "The trouble with drinkin’ is it ain’t no trouble at all.”

11. Tom Waits: “Warm Beer and Cold Women”
Cheers to all the “platinum blondes and tobacco brunettes” Mr. Waits is “drinking to forget.”

14. LCD Soundsystem: “Drunk Girls”
In spite of the song’s title, this track is an equal opportunity send-up of the stupid things both genders do under the influence.

15. Chance the Rapper: “All Night”
A modern, party-all-night classic filled that’s also a clever commentary on the price of fame.

16. Janis Joplin: “What Good Can Drinkin’ Do”
A bit of trivia: This 12-bar blues standard was the first song Joplin ever recorded.

17. Willie Nelson: “Whiskey River”
The country outlaw’s ode to the brown stuff still resonates 40 years after it was first released.

18. Snoop Dogg:  “Gin and Juice”
And no drinking playlist is complete without this effortlessly cool classic and quintessential '90s party song.