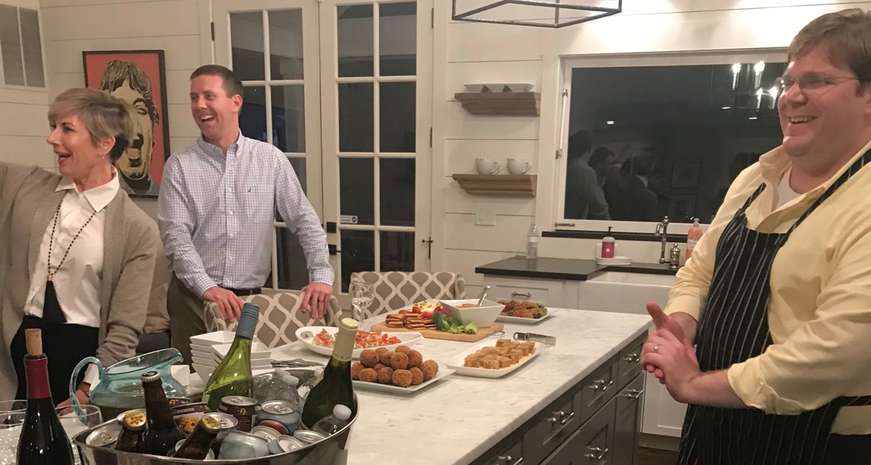 Recently, Southern Kitchen hosted a cocktail party for the Bojangles ad team. It was thrown out that we should make a meal inspired by their menu. But I thought that would be too easy, too expected. Instead, I decided to go all-out and use their most popular menu items as my ingredients for a full-fledged tasting menu. And you can too.

After all, flavor-packed prepared foods like those from Bojangles, and any other fast food chicken chain, make awesome shortcut ingredients when you're planning a party. Glean some inspiration from my menu for the next time you pick up a family meal from Bo's, KFC, Popeye's or your favorite chain. 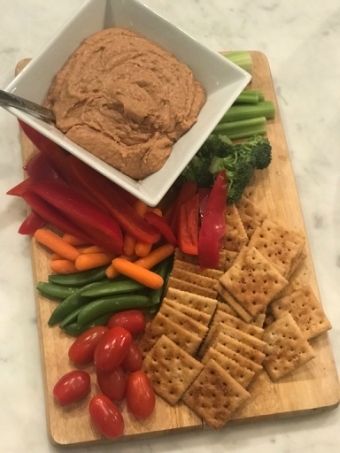 Pinto Bean Hummus
Every good hors d’oeuvres spread needs some sort of dip or spread, and Bo's Cajun pinto beans were calling out, “Make us into hummus!” The beans were packed with a flavor reminiscent of red beans and rice; delicious, but they needed to be a touch more neutral to carry some of the flavors associated with hummus. After a quick rinse, the beans were ready to take a spin in the food processor with fresh garlic, lemon juice, tahini and extra-virgin olive oil.

Unless it’s hot from the oven or grill, pita bread can quickly lose its luster, so crackers came to mind. I arranged saltine crackers on a baking sheet and brushed the tops with melted butter for enhanced browning and richness. Once the crackers came out of the oven, some crunchy raw vegetables were all that was needed to turn these Cajun pinto beans into a festive hummus spread.

Potato-Gravy Soup
Working my way through the sides menu, I would have been remiss not to include mashed potatoes in one of my dishes. I was leaning toward making croquettes until I ordered the spuds and found them coated in a flavorful white gravy. From there, my brain went directly to soup instead. Since the gravy had such intense flavor, I didn’t need to start with an aromatic base of onions and garlic — I simply pureed two picnic sides of mashed potatoes with one large side of gravy and thinned the soup out with milk. Most prepared foods are well-seasoned, so I didn’t even need to add additional salt. To garnish, I channeled a loaded baked potato with accoutrements of chopped bacon, shredded cheddar cheese and snipped chives. 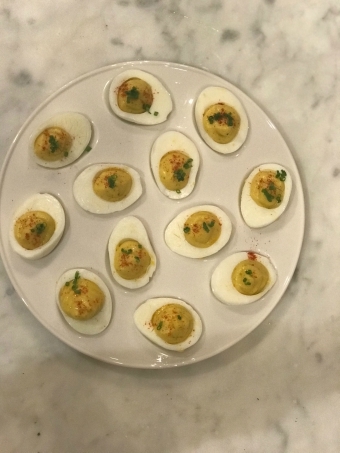 Crispy Chicken Deviled Eggs
It's hard to think of a proper Southern cocktail party without deviled eggs, but I wanted to make mine unique. To do this, I thought to reference the age-old question, “Which came first: the chicken or the egg?” with a crispy chicken skin garnish. As for the filling, a traditional mixture of cooked egg yolks, mayonnaise, yellow mustard, pickle relish and cayenne pepper from this recipe made the most sense. When the filling was smooth and flavorful, I piped it into the hollowed egg whites and topped with shards of spicy Bojangles fried chicken skin for a delicious finishing touch.

Jambalaya Fritters
When thinking of Bojangles, jambalaya doesn't exactly jump to the top of my list of menu items, but sampling theirs inspired me to find a place for it on the menu. Wanting a way to transform a loose rice dish into something more handheld, I instantly thought of the Italian street food staple, arancini, which are basically deep-fried balls of risotto. Why couldn’t this process work for jambalaya, too?

To start, I removed the large pieces of chicken and andouille sausage and chopped them finely. I added them back to the rice and bean mixture, along with some eggs and bread crumbs to bind and freshly chopped green onions for a hint of freshness. I formed the jambalaya into two-bite balls, then walked them through a standard breading procedure of flour, egg wash and panko bread crumbs. After frying the arancini for five minutes at 350 degrees, I piled them on a serving plate adorned with a zippy pesto made from fresh collard greens. Try using this recipe as your inspiration. 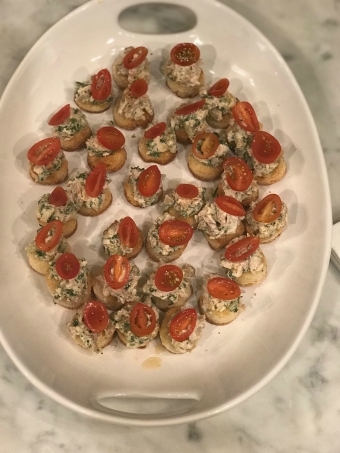 Chicken Salad Biscuits
No Bojangles experience would be complete without fried chicken, so incorporating crispy poultry was a no-brainer. Thinking of cold fried chicken at a picnic, I thought of turning the breasts and thighs into a chicken salad. Once I had pulled the meat from the bones, I folded in some mayonnaise, Creole mustard, sour dill pickles, pickle juice, fresh parsley and hot sauce.

From there, I thought the perfect vehicle for eating salad made from fried chicken would be toasted biscuits. Using a small biscuit cutter, I punched three small disks out of each Bojangles biscuit, split them in half, then buttered and toasted them in the oven. When they emerged, they had a cracker-like crunch with the essence of a buttery biscuit. Finally, to cut through some of the richness, I thinly sliced grape tomatoes and marinated them in a mixture of apple cider vinegar, sugar, salt, pepper and extra-virgin olive oil. The tomatoes took on a sweet pickled flavor that was a beautiful contrast to the savory chicken salad. 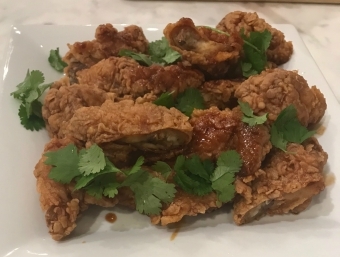 Kentuckyaki Wings
After pulling the meat from the breasts and thighs, I still had the wings with which to contend. Since the wings were already breaded, I knew that I didn’t need to do much in terms of transformation; rather, I just needed to toss them in a sauce that reflects the Southern Kitchen experience. Instantly, I thought of Kentuckyaki sauce, which is basically a teriyaki sauce spiked with a healthy dose of bourbon. For our version, I reduced soy sauce, rice wine vinegar, Steen’s cane syrup, fresh ginger and fresh garlic into a syrup. While the reduced sauce was still hot, I added the bourbon and turned off the heat to preserve the flavor of the booze. To serve, I tossed the wings in the Kentuckyaki sauce and roasted them in the oven until sticky from the glaze, then garnished with fresh cilantro leaves. 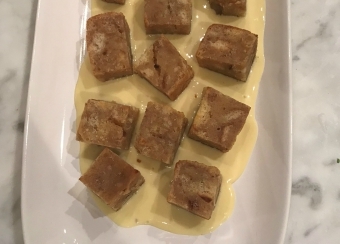 Biscuit Bread Pudding Bites
Knowing that Bojangles offers sweet biscuits on their menu, I would have been blowing it not to attempt a dessert. After trying their iced cinnamon biscuits, I knew they would have been perfect in a bread pudding. I made a rich custard from half and half, eggs, egg yolks, vanilla extract and just a touch of sugar, then let the biscuits soak up this warm custard bath. I placed the biscuit mixture into a buttered loaf pan and baked it at 250 degrees until set. (Here's our basic technique for reference.) The result was a rich, pillowy bread pudding with a light cinnamon flavor.

Once cooled, I cut the bread pudding into bite-sized cubes. Since most bread pudding is served with a whiskey sauce, I decided to make a crème anglaise dosed with bourbon for dipping. Custard on custard is never a bad idea, and the aromatic qualities of the bourbon shone through in the finished dish.

Sweet Tea Artillery Punch
Finally, we needed a signature cocktail to complete our Bojangles-inspired soiree. I needed to look no further than the half gallon of sweet tea that accompanied my family-sized order for inspiration. With a classic Chatham Artillery punch in mind, I combined bourbon, cognac, prosecco, sweet tea and fresh lemon juice. After some adjustments (the initial tasting was WAY too boozy), we found the perfect balance of sweetness and effervescence. Served over ice, the punch was the biggest hit of the night.