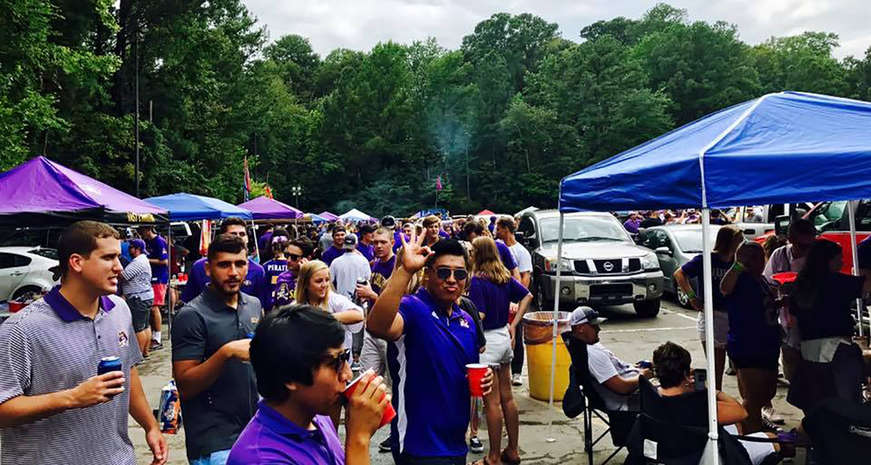 Football, drinking and grilling are essential tailgating activities. After setting up your tent, lawn chairs and the grill, the fun really begins when the red plastic cups start filling up.

Of course everyone’s there to celebrate their favorite team and get ready to watch the big game, but there are more fun and games to had during the tailgate. We’ve got a few yard games and activities that will keep tailgaters of all ages happy and occupied until kickoff. 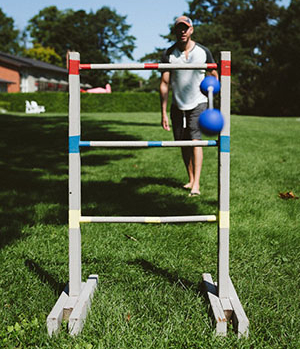 The trick to a good tailgate game is that it must be portable and easy to clean up, so you won’t miss kickoff. All of the games we’ve included in our roundup below can fit in a car and require little assembly. More importantly, none of them will cost you a fortune to add to your event.

Ladder Toss
At any cookout, ladder toss is as commonly found as bocce ball. It makes a great tailgate game because you can play in teams and you don’t need to be that coordinated to win. (In other words, you can still play it after a few beers.) You only need to be about 5 to 10 feet away from the ladder when you toss the ball, so it won’t take up too much space in your tailgating area either. 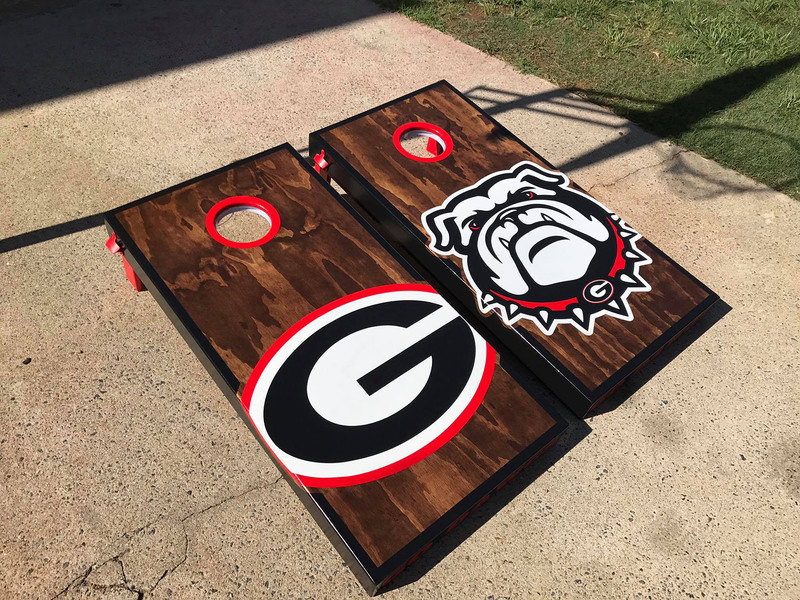 Cornhole
Another important tailgating game requirement is you need to be able to play it with one hand and keep a beer in your other. This fact makes cornhole is the perfect tailgate game. It also stirs up just the right amount of competition to keep the tailgate interesting without people going overboard. People also hold a special place in their hearts for their cornhole boards. You can’t show up to a tailgate without customizable cornhole boards that show off your school spirit, come emblazoned with a monogram or painted in some other unique way. 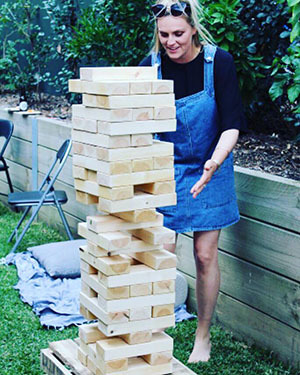 Giant Jenga
Every time a Jenga tower falls we’re slightly surprised and a little frightened by the noise it makes. Now take that tower make it larger than life and imagine how much fun it can be. Giant Jenga is found in backyards, breweries and cookouts around the country. It’s a great tailgate game because multiple people can play at once, and the more you drink the better you think you are playing it. Although it’s slightly dangerous — keep the small children away — it’s a fun way to stay occupied by building and rebuilding the tower with each catastrophic fall.

Washer Toss
We would include the normal game of horseshoes, but throwing metal horseshoes in the middle of a large group of revelers is a recipe for disaster. Instead we recommend playing the smaller — less dangerous — version of it: Washer toss. The goal of the game is to get the washers into a box about 20 feet away. If you can get it into the center hole (usually made from a can or PVC pipe) you earn more points. And everyone always needs more points. You can buy an official washer toss set, but you can easily make a DIY version using wood and washers you can find at any hardware store. 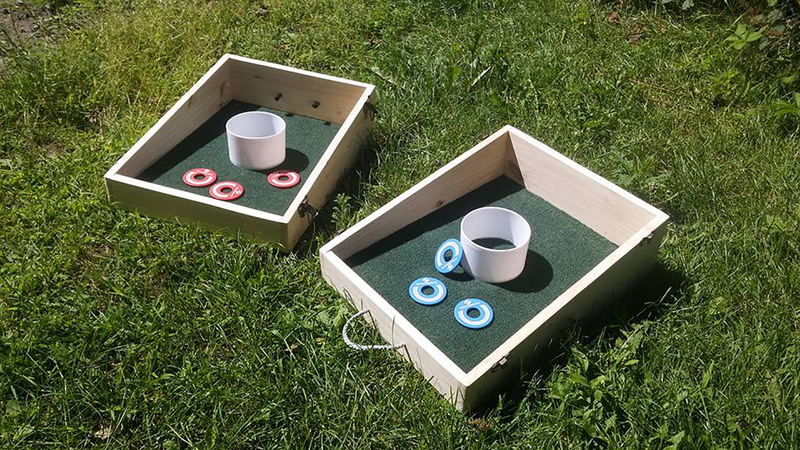 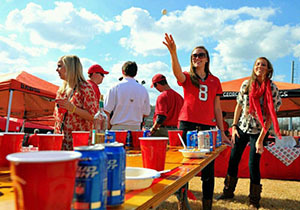 Drinking Games
Chances are you’ll be sipping on some sort of beverage (we don’t mind if its alcoholic or non-alcoholic) during the tailgate. So why not turn that drinking into a fun game? Make sure you have a few ping pong balls with you when you’re getting ready for the tailgate. Once you're at the party leave a table empty and set up a pyramid of red solo cups at each end. (A set of 6 or 10 cups makes a good pyramid.) Gather your friends, separate into two players per team and let the ping pong balls fly.

The goal, of course, is to get a ping pong ball into a cup on the opposite site of the table, thereby forcing an opposing to drink. Unlike your old college beer pong days, leave the alcohol or mixed drinks out of the playing cups. Instead fill the cups on the table with water, so you won’t waste any alcohol and you won’t be left with a sticky mess if any of the cups spill. 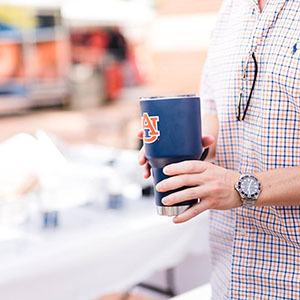 Another favorite drinking game is flip cup. You can play with as many people as you want, as long as there’s an equal amount of people on each side. You’ll also need an empty table to play. To get the game going, each player needs to have a few sips worth of a beverage in their cup to drink when the time comes. One player from each team at one end of the table will start the game by tapping cups with their opponent across the table, then tapping the cups to the table before finishing their drink as fast as they can.

Once they’ve finished their drink they must flip the cup so it lands upside down on the table. This part takes a lot of skill and concentration, and the more inebriated the players become, the more entertaining the game. Once a player has successfully flipped over his or her cup, the next player drinks their drink and flips their cup. This goes on until everyone on the team has finished their drink and flipped their cup. The first team to flip all their cups win.

If this explanation was a little confusing, we recommend watching this video, which shows you how to properly play flip cup. 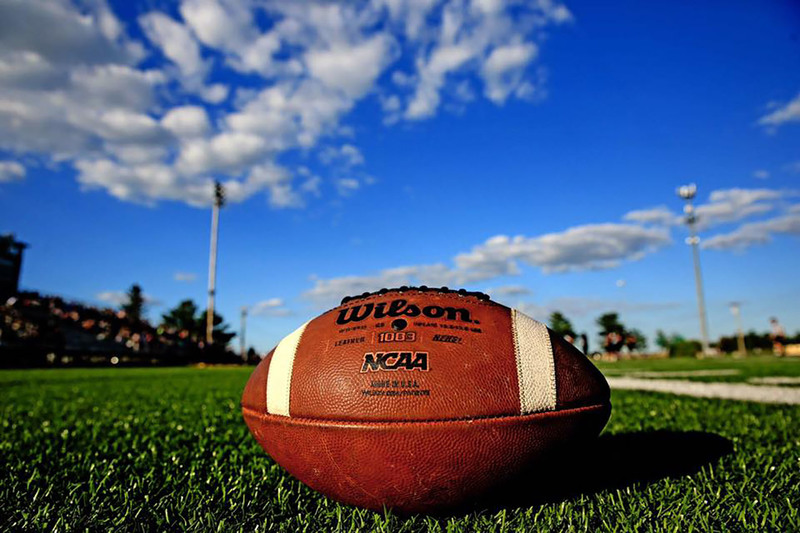 Frisbee and Football
While your packing your car with your cooler and food, make sure to throw in a football and a frisbee. Yes, you’ll have to put down your beer if you want to toss these around, but they're easy ways to pass the time at a tailgate party. Not only will you be able to play with multiple people, you can also get the younger kids involved with a fun game of catch.

Take our quiz to find out your tailgating personality