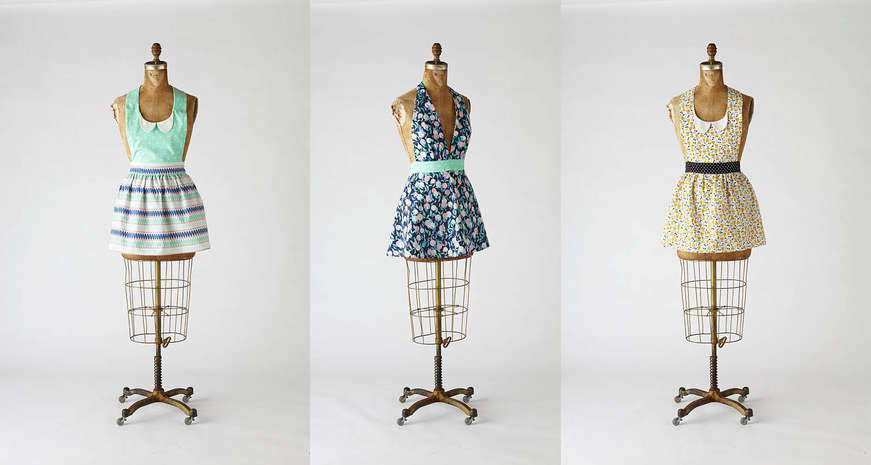 Find your inspiration and use it to do great things. It’s a common concept most creatives know well, and Danielle Mathis, founder of Textile & Twine, and maker of fashionable aprons and home linens, is no different.

Her inspiration? Fabric. But not just any fabric. “All of the details that go into this finished piece of material inspire me,” said Mathis, who was born and raised just south of Atlanta in Fairburn, Georgia, and runs Textile & Twine from nearby Conyers. “For my designs, I am 100-percent inspired by vintage fashion.”

When you think of old-school fashion for women, particularly from the '50s and '60s, one name that might instantly come to mind is June Cleaver. It’s probably not a surprise that the iconic fictional character and other Nick-at-Nite-era sitcom favorites like Lucille Ball played a major role in the creative vision for Textile & Twine aprons when Mathis was first getting started. 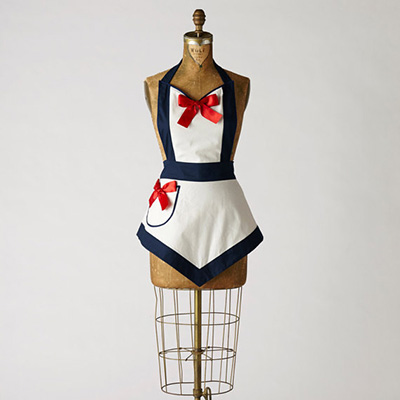 “I always used to peruse the sewing patterns in the craft section at Jo-Ann’s whenever my mom and I would go shopping there,” Mathis said. She added that although she took a few sewing classes early on and learned a bit from her mom (who is a quilter), she taught herself the craft.

“One day, I decided to buy a pattern,” she remembers. “I wanted something more complicated than the pillows and tote bags I had been sewing in class, but not too hard. As I flipped through the patterns for sale, I found the absolute cutest collection of 1950s apron patterns. They instantly reminded me of June and Lucille -- characters I knew so well from watching late-night re-runs. I bought those patterns immediately.”

From there her career took off, at least mostly. She admitted that in the beginning her vintage-inspired aprons, which her mother graciously modeled, were “awful.” However, as Mathis’ work improved, her mother began posting pictures of her aprons online and soon she began receiving requests from all over the country from people eager to have their own vintage look.

“My aprons are different than other cutesy retro aprons on the market because of my attention to detail in the designs, and the unique combinations of fabrics I choose,” she said, adding that one of her favorite new fabric companies, Blend Fabrics, is based not far from her in Atlanta. “I cannot tell you how many times someone has emailed me to ask if the dresses I sell on my website come in different sizes. People look at them and see a beautiful, vintage-inspired dress, which is exactly how I thought when I designed them all.”

Mathis reasons that beyond the one-of-a-kind designs she uses in her aprons, and the care and quality of her work, people just like to remember the good-old days, and she believes her aprons remind them of their roots.

“Aprons have this nostalgic nature that so many of my customers appreciate,” she said. “An apron reminds you of your mother or your grandmother, of family dinners, of days gone by. Aprons just have a way of making people think of being home.”

While she hasn’t been able to quit her full-time job as a restaurant manager to focus on Textile & Twine just yet, Mathis said she’s on track to do so this year. In the meantime she plans to continue growing her business, adding tea towels, zippered pouches, throw pillows, bed linens, and both window and shower curtains to her list of retro designs. In the end, when they wear her aprons, Mathis wants women to feel a fond sense of nostalgia and also uplifted.

“I wanted to create something that was beautiful and functional,” she said. “I want it to feel like putting on your favorite dress whenever anyone puts on a Textile & Twine apron.” 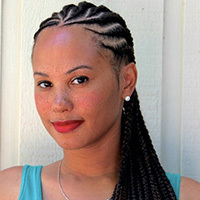 A longtime music and lifestyle journalist, Jacinta Howard frequently covers Atlanta's arts and music scenes, and her byline has appeared in Creative Loafing, Denver Westword, Upscale Magazine, Hip-Hop Weekly, The Source and a host of others. She is the author of six novels of women's fiction and contemporary romance, a USA TODAY Must-Read Author and a two-time RONE Award nominee.