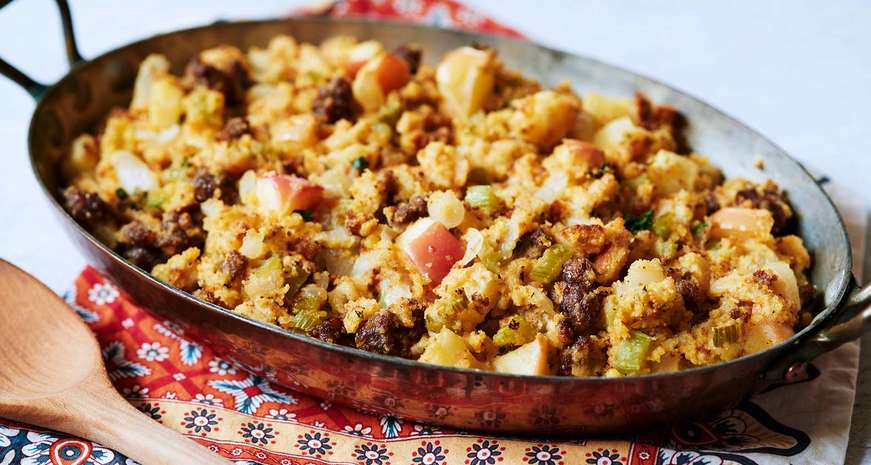 Taste of a Place: Dressing vs. Stuffing

You most likely know where you'll be spending Thanksgiving, who will gather around the table and what recipes will be served. And you probably know the stories behind those recipes. But I must ask, will you dine on dressing or stuffing with your turkey?

Growing up, ours was a house divided.

My mother was of the dressing camp and thought the melange of cornbread, sautéed onions and celery should be baked in a casserole dish separately from the bird. Now that I have staged many Thanksgiving meals on my own, I see the genius in my mother's way of looking at dressing. In a casserole dish, it can be prepped ahead, chilled, and slid into the oven at the last minute to bake up hot, crispy on top, and flavorful.

My father came from the other team, with roots in West Tennessee. He was raised on stuffing, that same mix of cornbread and seasonings, but stuffed inside the turkey where it would bake up moist and keep the turkey moist, too. So, in our house we always had both stuffing and dressing, just like there was plenty of white and dark meat. And there were two kinds of cranberry sauce — homemade and canned.

Is it Dressing or Stuffing? 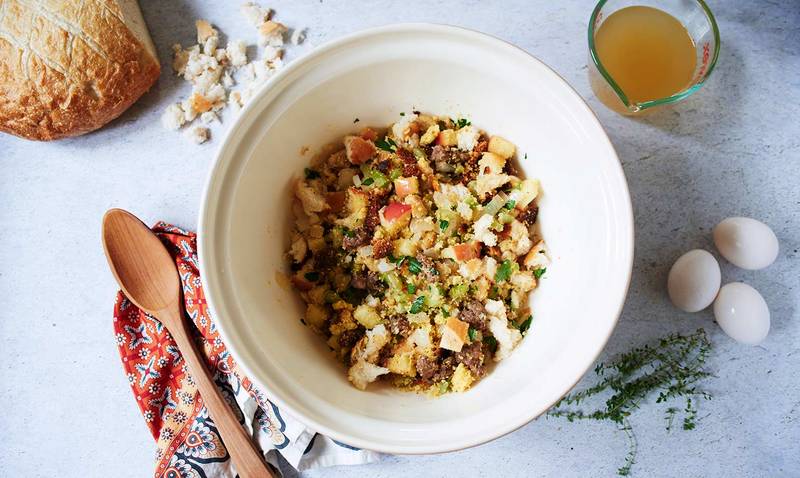 The words "dressing" and "stuffing" have long been used to describe the bread-based savory mixture that has accompanied poultry of all types in our country.

I pulled down my "housewife" cookbooks to find out if it was called stuffing or dressing in the early 1800s. Mary Randolph, the author of The Virginia Housewife, stuffed turkey and cooked it on a spit over a fire in 1824. She advised that you "take the crumb of a loaf of bread, a quarter of a pound of beef suet shred fine, a little sausage meat or veal scraped and pounded very fine, nutmeg, pepper, and salt to your taste; mix it lightly with three eggs..."

And in 1839, in The Kentucky Housewife, Mrs. Lettice Bryan stuffed the interior of the bird. "Make a stuffing of equal portions of bread crumbs and chopped suet; season it with salt, pepper, sifted sage, grated nutmeg and lemon, and moisten it with yolks of eggs." After stuffing the turkey, she also placed it on a spit and roasted it over a fire. And her other version of stuffing includes "equal portions of fresh sausage meat and light bread, seasoned with sweet marjoram, nutmeg and lemon, moistened with yolk of eggs..."

The Dressing is in the Details 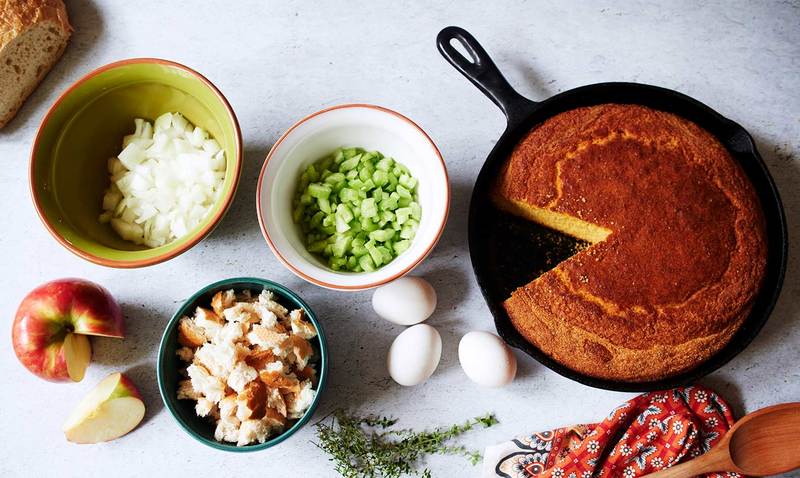 Cooks have relied on leftover bread to form the basis of their stuffing or dressing. That might be biscuits, white bread and often cornbread. The latter has been a Southern staple for generations, but good cooks have realized that a dressing with all cornbread is too heavy. You need a mixture of breads in order to lighten it.

These are details your mother or grandmother knew and might have mentioned. But if not, here are things I have learned from making dressing for Thanksgiving.

I use the same basic formula but vary the add-ins each year. Cornbread contributes one third of the structure of my recipe, along with French bread and whatever other sandwich bread I have on hand. My mother made the cornbread a day in advance, so it would be nice and dried out when she made dressing. The reason? You want the bread to soak up lots of liquid stock.

So, if you think about it, dressing is perfect for do-aheaders. Bake cornbread a day in advance, crumble it up, and also crumble up the other bread, then place them in separate, lightly covered bowls in the kitchen the night before you make dressing. The next day you combine everything in the largest bowl you've got. I remember my mom mixing up dressing in the large roasting pan she used to soak country ham.

To give flavor and crunch to dressings, you'll saute aromatic vegetables in butter, always including onion and celery. Sometimes a sweet addition, like chunks of apple, is nice; I often add chopped dried apricots to the saute. You might also add golden raisins or dried cherries. And here is where you can add a good local sausage to the mix, or omit it, depending on your taste.

You also need to add an aromatic herb or two, to add depth to the recipe. Fresh sage is wonderful, as is parsley. I love fresh thyme but you can also use dried, and if you want a bold dressing, go ahead and crumble in a few fresh rosemary leaves. Just be careful you don't add too many, as rosemary has a powerful flavor and can hijack the recipe in an instant.

To bind the dressing together, add eggs. And to keep it moist you'll add either turkey stock (made by boiling the neck of the turkey with water and seasonings, covered, for at least an hour, then strained and cooled), or you can use chicken stock. And to make your grandmother proud, ladle a big spoonful of turkey pan juices — the drippings — over the top of the dressing before it goes into the oven to bake. That takes your dressing to another level. 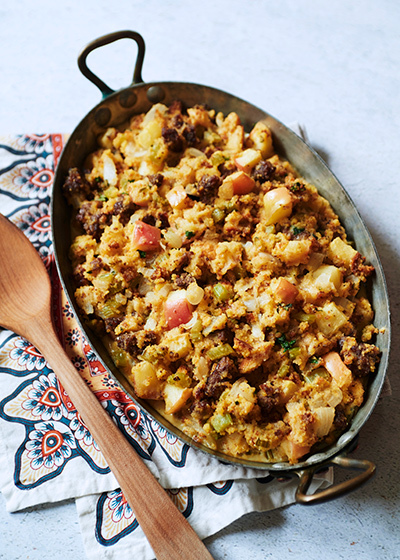 Planning Ahead is Easy to Do
I can't say enough that the nice thing about dressing is it can be made a day ahead and refrigerated. Then, when the turkey is out of the oven and resting before being carved, you can pop the dressing in the oven. And if you want to make this dressing vegetarian-friendly, omit the sausage and use vegetable broth.

The following recipe makes enough dressing for a dozen people. And I haven't forgotten folks who prefer stuffing! It is enough mixture to stuff into an 18- to 20-pound bird. Follow the directions that come with the turkey for stuffing and roasting, by the way. This recipe can be easily doubled, by the way — just bake two casseroles, or bake one casserole and stuff a turkey.

Enjoy, and Happy Thanksgiving from my kitchen to yours!

My Favorite Turkey Dressing
Serves: 12 to 16

Instructions
Heat the oven to 400 degrees.

Add 2 more tablespoons of butter to the skillet and when it melts, add the apple and cook, stirring, until lightly browned but not mushy, about 5 minutes. Transfer the apple to the bowl with the onion and place the skillet back over medium heat.

Melt the remaining tablespoon butter in the skillet. Add the celery and cook, stirring, until it softens, about 5 minutes. Transfer the celery to the bowl with the onion and place the skillet back over medium heat.

Crumble the sausage into the hot skillet. Cook, stirring to break up any large pieces, until the sausage has browned lightly and is cooked through, about 8 minutes. Using a slotted spoon, transfer the sausage to a paper towel-lined plate to drain. Add the drained sausage to the bowl with the other ingredients and stir to combine.

Add the cornbread, French bread, sandwich bread, parsley, eggs and thyme and stir just to combine. Season to taste with salt and pepper. Pour in enough broth to really moisten the dressing. Spoon into a 9- by 13-inch baking dish. Spoon some of the pan juices from the cooked turkey on top, if desired.

Bake the dressing, uncovered, until it browns lightly on top and is firm to the touch, about 45 minutes. Let cool 5 minutes, then cover with foil to keep warm until serving.