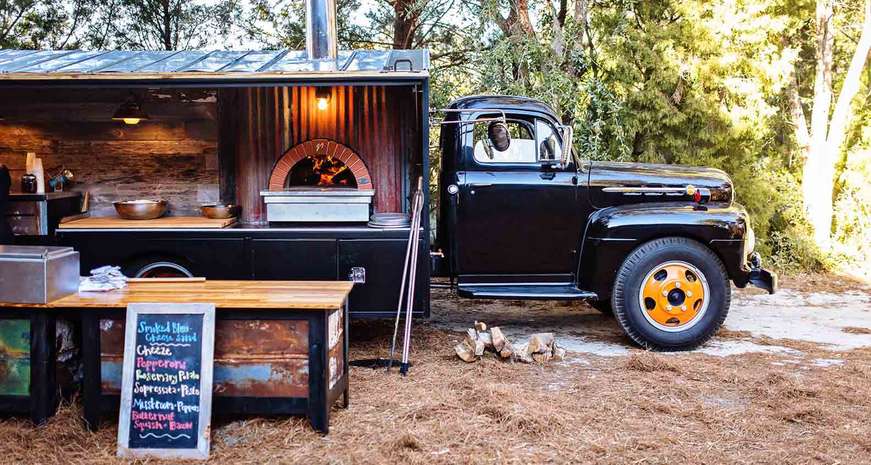 Southern Crust: A pizza party on a classic truck

If you happen to find a 1953 Chevrolet 3100 Series pickup truck rotting away in a Tennessee farm, just know that you can do something with it. Sure, you can leave sitting there. Or, if you were creative, enterprising and aware that people love old-school trucks – especially in the South – you could consider starting up a business.

So let’s say you reupholstered it with fine leather from Virginia, added a completely custom box in the back made from reclaimed South Carolina barnwood, then had it refinished and restored back to working condition. It goes from a forgotten rust-bucket to a beautifully transformed vehicle. There’s only one logical thing to do next: turn this lovely Chevy truck into a mobile kitchen called Southern Crust, which can show up to your home in metro Atlanta and start slinging delicious pizza and beer. 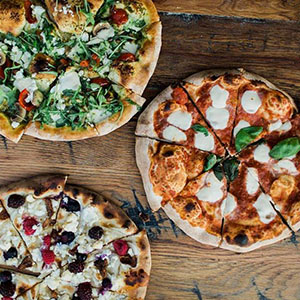 That’s precisely what Bryan Lewis did, with a little help. The Charleston-based businessman’s father Bob owned and operated an Atlanta marketing agency named MME, or Mobile Media Enterprises, for 20 years. Bryan worked for his dad at MME, which specialized in brand marketing activations that included vehicles (including food trucks, tractor trailers and even Airstreams), so he had an idea of what it would take to turn an old truck into a high-quality mobile pizza party.

Next of course, he needed to make great pizza. So Bryan had a custom refrigeration unit installed, and imported a Mugaini wood-fired oven, which was made in Italy and can reach 800 charring degrees, but also works well at lower temperatures, when they need to get flavors from the wood into roasted fish, vegetables and other proteins.

Then he focused on serious quality, which is obvious when you taste Southern Crust’s exceptional pies. Any products that don’t come directly from Italy (including extremely light Double Zero flour, olive oil and San Marzano tomatoes), come from the Atlanta area – Southern Crust works with the City of Atlanta’s urban farms program to source seasonal produce.

The result is a very good hand-tossed pizza, with a well-charred crust, fresh flavor and of course a one-of-a-kind presentation. “We’re trying to be the fun, casual relaxed catering company,” Lewis said. “We try to make it easy on our clients, so we created a menu that has a lot of different offerings to choose from but we can also customize a menu based on customers’ needs.”

That menu is pretty fancy for a Chevy. Appetizers include char-grilled shishito peppers with benne seeds, extra-virgin olive oil and lemon, along with braised pork meatballs and pancetta-wrapped figs in aged balsamic vinegar. They’ve got five “classic” pizzas and 10 specialties, and offer five salads, desserts (the chocolate ganache s’mores are unbelievable), and a selection of draft beer, wine, soft drinks and mocktails. 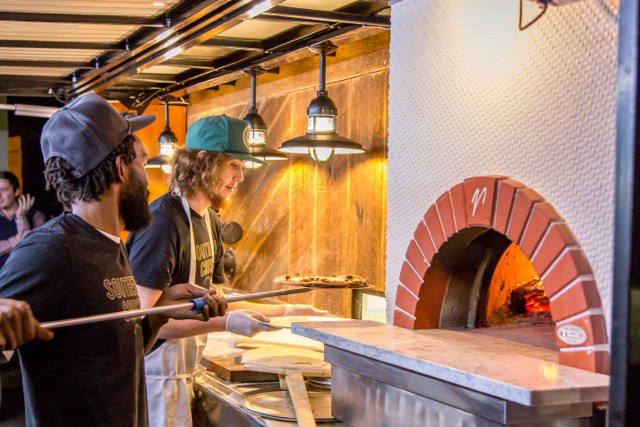 “We spent a lot of time developing recipes over the course of a few months,” Lewis said, “testing them on friends and family until we perfected them.” He recommends the Margarita to start with, because “it gives you a really good taste of the simple, fresh pizza, where you can really taste the dough,” which he says they’ve perfected. He also says one of the most popular pizzas is their Pistachio Pesto. “It’s got great buffalo mozzarella, fresh arugula, green pesto paste. It’s really bright and vibrant. We get a lot of requests for that, and our Calabrese white pizza.”

“We’re trying to be the fun, casual relaxed catering company,” Lewis said. “We try to make it easy on our clients, so we created a menu that has a lot of different offerings to choose from but we can also customize a menu based on customers’ needs.” 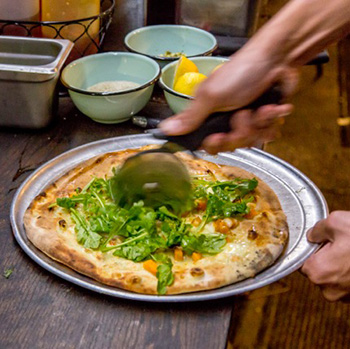 Southern Crust doesn’t seem like it’ll have any problem drawing clients, but Lewis has been careful in marketing the business in its first year. He’s based in Charleston, though the company and truck are stationed in Chamblee, just north of Atlanta’s Buckhead neighborhood, so he handles administrative duties from his office, then travels to Atlanta for events, training and whenever necessary.

“Any startup has its challenges,” Lewis said. “The size and scale of Atlanta is a different challenge than I’m used to with other projects I’ve done in Greenville and Charleston. It’s a really large market to get your name and brand out there.” So rather than simply purchasing magazine and newspaper ads, Lewis targets events he’d want to sponsor, keeps the truck’s visual identity in the mix on social media, and hosts events for event planners and parties at friends’ houses to get the word out.

He says they’ve already stepped into another area of food service that’s sure to be successful: breakfast. “We created a breakfast menu for corporate events, and Southern Company recently requested an event for the whole company. We pulled the truck up in front of their headquarters and catered a large breakfast for everybody, with baked frittatas, biscuits, bacon, wood-fired bagels, pastries, yogurt and parfaits.” While we weren’t there to taste-test anything, it’s hard to imagine anybody at the gas and electric utility company having a bad day when that happened.

So what’s next for the old-school pizza truck? Lewis is looking to scale up, investing in more versions of the original Southern Crust mobile unit and seeing how he can expand offerings. “In the next few years we’ll have several trucks in Atlanta, all completely different and very unique. We might do a beverage truck where we have a heavy bar program with wine, beer and spirits, which we’d pull up to a wedding or private residence for an event.” 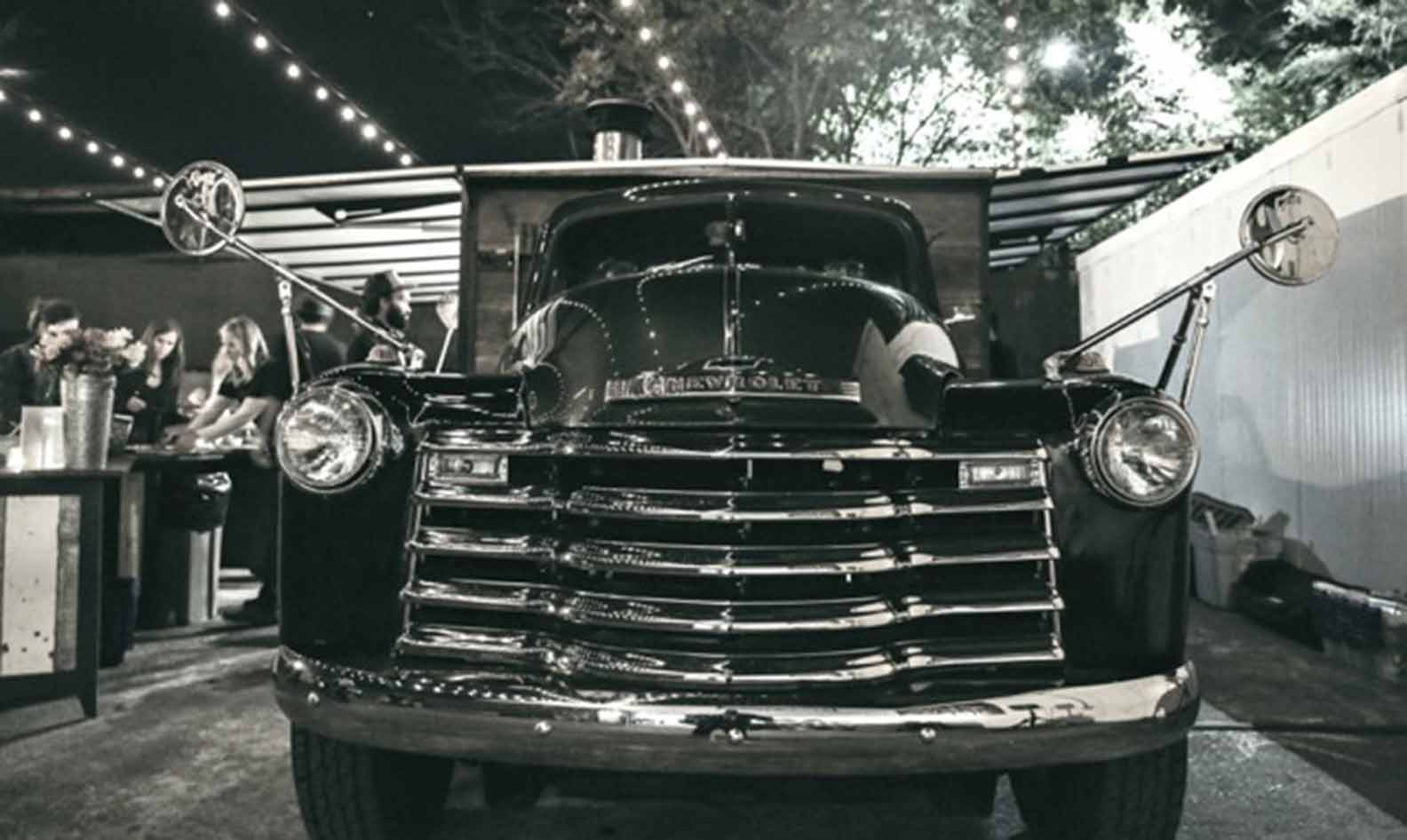 Yep, with Southern Crust, it looks like fans of pizza delivery services have an all-new, yet completely old-school way of having pies brought to their doors.

And although they'd prefer baking their pizzas for you themselves, they offered this easy recipe to make the Greek Yogurt Herb Dressing they use in the Chopped Kale Salad on their menu. Enjoy!