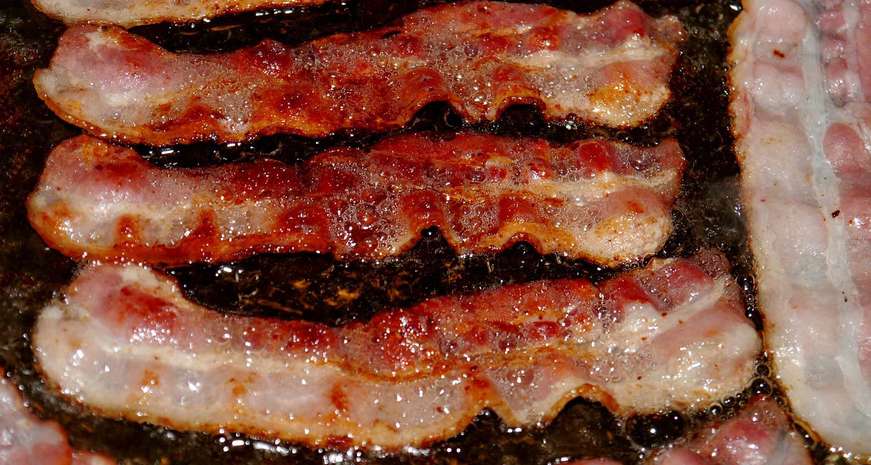 Bacon sizzling on a skillet

Most people think of bacon as something we consume in the morning, but that may be changing, thanks to a current craze happening around the internet. Yes, people are listening to recorded sounds of bacon being fried in skillets as an alternative to traditional white noise sleeping aids.

As crazy as it sounds (and possibly is), it’s actually taking off. There are places like White Noise Market, in which you can download “The snap, crackle, and pop of frying bacon in a pan.” The site recommends you “try mixing it with our fire and brown noise sounds.”

While sites like White Noise Market want you to download an app to play the sound file, you could instead just visit BaconSizzling.com, where you will find exactly what you’re looking for and nothing else, except of course for an amazing GIF of (you guessed it) bacon actually sizzling in a skillet, on an infinite loop.

For those who insist on getting the universally recommended amount of sleep for humans, you can play this 8-hour YouTube video of a frying bacon sound effect, with a description that sounds so believable you just might ignore your cardiologist’s warnings.

Highlights include such assertions as “The soundscape of a bacon being cooked and fried will help you to calm your mind, concentrate, relax, fall asleep, focus better while you study or while you're working.” If that’s not enough, it also recommends bacon white noise for “meditation, yoga, studying, baby sleep, concentration, spa and massage.”

Truth be told, it actually kinda works — at least when you’re writing a story about listening to bacon. But there is a pretty serious anticipation of eating actual bacon after listening for a few minutes, so … maybe just cook some bacon instead? Totally your choice.

Just remember: we can’t guarantee you won’t wake up and be insanely bacon-hungry the morning after, but we’re pretty sure that you’ll have delicious dreams.

Listen to 8 hours of bacon white noise on YouTube