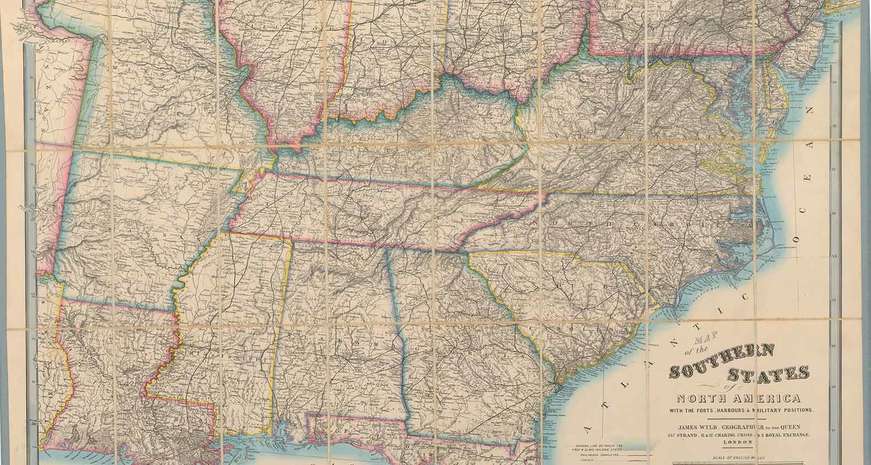 A historical map of Southern states

Which states are really in the American South? A recent story in the data analytics news site FiveThirtyEight tackled the question with a nationwide poll, and according to answers from hundreds of opinionated Southerners, you may surprised at who's in and who's out.

The story began with a poll in which people were asked which states belong to a different region: the Midwest. FiveThirtyEight used a Survey Monkey Audience poll to ask the question but seemed not to gain any definitive answers, so they moved on to the South.

The Southern poll was apparently much more conclusive, even surprising the writer, Walt Hickey, who said after reading the results, "Although I think the South starts a few miles north of Baltimore, I am — according to self-identified Southerners — very wrong."

According to Hickey, the poll had 1,135 respondents who identified "a lot" or "some" as Southerners. They were sampled from a poll of 2,528 individuals, half of whom come from states indentified by the U.S. Census Bureau as the South. That means Florida, Georgia, Maryland, North Carolina, South Carolina, Virginia, West Virginia, Delaware, Alabama, Kentucky, Mississippi, Tennessee, Arkansas, Louisiana, Oklahoma and Texas.

So who made the cut? You might not be surprised to hear that over 90 percent of respondents said Georgia and Alabama were the South. Others with high percentages include Mississippi and Louisiana, and other Southeastern states (at least the ones we call "Southern" at SK) polled higher than 60 percent.

From there, things went slightly left, or perhaps north. Maryland, consistently included in Census Bureau's defined Southern region, polled as being less Southern than both New Mexico and Arizona. According to Hickey, that means "Walter White is more Southern than a Marylander."

I won't spoil the rest for you, but it's definitely worth seeing for yourself how our Southern sisters and brothers really feel about Texas, Missouri and West Virginia. It ain't pretty.

Read the full story at FiveThirtyEight