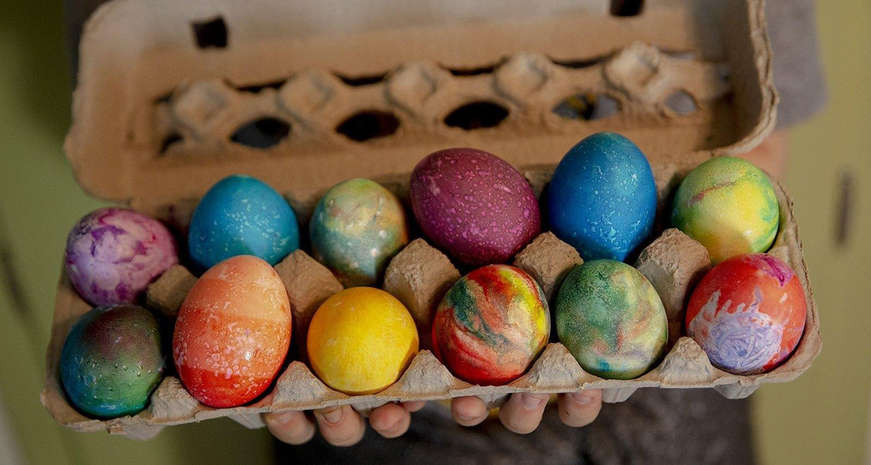 Egg-dyeing dates back much further than the invention of Paas egg-dyeing kits, which were invented in the late 1800s and have become almost ubiquitous this time of year, but you can add color to them without a kit or specialty ingredients.

Transforming everyday eggs into bright, colorful, sometimes speckled or glittery objects is one of spring's great pleasures, even if you aren't a kid.

Although the most famous decorated eggs today might be the elaborate jeweled Fabergé eggs from Russian high society of the late 19th century, royals throughout Europe have been coating eggs in gold, silver or expensive dyes collected from far corners of their trading routes since at least 1290, when King Edward I commissioned the decoration of 450 eggs to be given out to his fellow nobility at Easter.

We closely associate dyeing eggs with Easter, but historians say that the tradition of painting or otherwise decorating eggs predates Christianity. Archaeologists have even found ostrich eggs in a cave in South Africa that someone engraved with hatched patterns some 60,000 years ago. Colorful eggs have long been part of the Persian New Year and are also associated with the Egyptian celebration of Sham Ennessim, which marks the beginning of spring.

In Europe, both rabbits and eggs were a prominent part of early pagan festival Eostre, where Anglo-Saxons hoped to curry favor with the goddess of fertility, whose animal symbol was a bunny. During early Christianity, Christians were forbidden from eating animals products, including eggs, during Lent so farmers would hard-boil eggs to preserve them for later, which is why so many traditional Easter foods and baked goods contain hard-boiled eggs.

The idea of an egg-laying Easter rabbit likely first started in Germany, where, for hundreds of years, parents have been passing down the tradition of the "Osterhase," a fabled rabbit that left behind colored eggs for children. This tradition probably came to America with German immigrants in the 1700s. 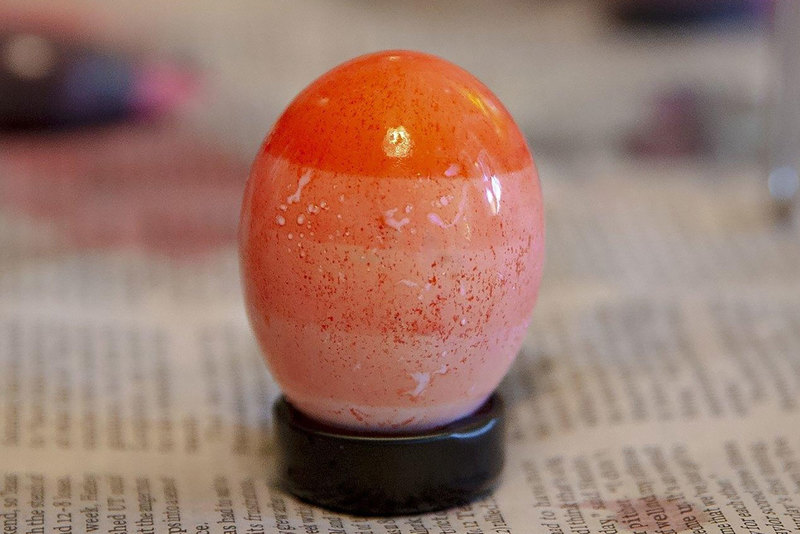 In the Jewish tradition, an undyed hard-boiled egg is an important part of the Seder plate, but the connection between Easter and Passover is, of course, much deeper than eggs. The word "Easter" derives from Eostre, but many other languages use a Passover — or Pesach — derived word for the holiday, such as Pasqua, Paques and Pascua. Paas eye-dyeing kits — invented in 1893 by William Townley, who owned a drug store in Newark, N.J. — were named for the Dutch word for Easter, Pasan.

This etymological web reminds us that although many Americans associate egg-dyeing with Christianity, the practice of decorating eggs — for symbolic reasons or just for the craft of it — extends far beyond any one denomination.

I absolutely loved dyeing Easter eggs when I was a kid — my sister and I continued to dye eggs until we were well into high school — and I still get a kick out of doing it with my kids today.

We're a nerd family that loves digging into the origin of words and traditions, but even if the history behind egg-dyeing isn't at the forefront of your mind when you're setting up the cups of vinegar and food coloring, it's fun to think about different ways to make them. 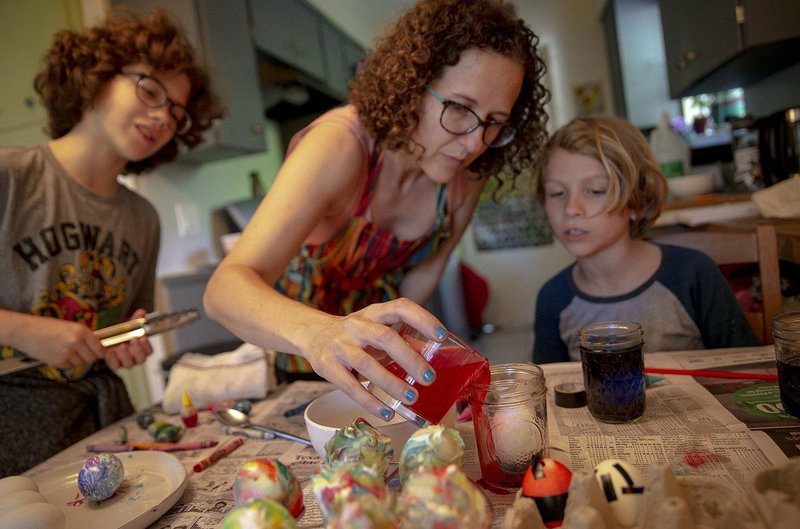 On a recent evening, we experimented with several different techniques that I'd read about online.

Although Martha Stewart is one of the many fans of blowing out the inside of an egg before decorating the shell, I prefer the old-fashioned method of boiling the eggs before dipping them, usually in dye made from an egg-dyeing kit. If you don't want to use the tablets, you can use liquid food coloring (between 6 and 20 drops, depending on the color and just how colorful you want your eggs) in 1/2 cup water and 1 teaspoon of vinegar.

Why vinegar? Eggshells contain calcium carbonate, and the calcium reacts with the acid in the vinegar to make carbon dioxide, which allows the dye to permeate the outside of the shell. Too much vinegar will create too many bubbles on the surface, which creates an uneven saturation of color, and not enough (or not using any) prevents the color from soaking in. The mixture of 1 teaspoon vinegar to 1/2 cup water creates a liquid with just the right pH for the magic to happen.

But before we get to the crafty part of this project, a quick reminder about hard-cooking eggs. You can bake raw eggs at 350 degrees for 30 minutes (some people put them in a muffin tin first) or you can cover them with water and boil them for between 4 and 9 minutes, depending on how you like your yolk. For our egg-dyeing session, I used my Instant Pot to pressure cook the eggs for about 4 minutes, which doesn't save that much time over boiling them, but I could cook all 18 eggs at a time. I also like having to deal with only 1 cup of water in the bottom of my electric pressure cooker rather than a whole pot's worth. 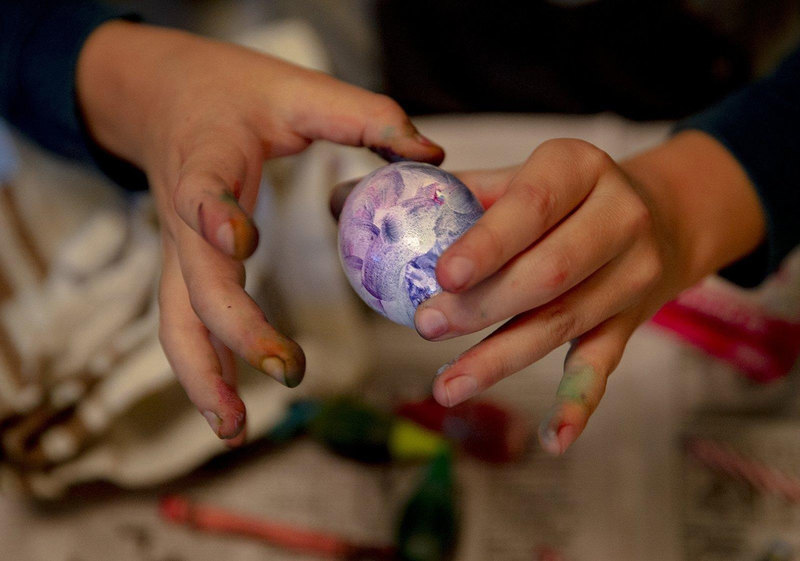 An Instant Pot will come in handy if you want to dye and cook your eggs at the same time. Put the food coloring, water and vinegar mixture in three or four pint-size canning jars, depending on the size of your multicooker. (An 8-quart Instant Pot should hold four pint-size jars.) Place a wire rack and a cup of water inside the Instant Pot, and then place the jars on top. Place 2 or 3 eggs inside each jar, topping each jar off with a little more water to cover the eggs. Seal the multicooker and pressure cook for six minutes and use natural release for the steam. The jars will be hot when you finally open the multicooker, so use gloves to remove them. Dunk the eggs in cold water to help cool them faster and then store in the fridge for up to a week.

We kicked off the experiment with the Pinterest-friendly Cool Whip method. Some people use shaving cream for creating these tie-dyed eggs, but then you can't eat the eggs, so I stuck with whipped cream.

The boys took turns scooping store-bought whipped topping onto a sheet tray, about 1/2-inch thick, and then they each squeezed drops of food coloring on top. They used a chopstick to gently swirl the colors, but not too much so that everything turned brown or gray. We soaked four hard-boiled eggs at a time in a bowl of vinegar for about two minutes, and then dried them off before rolling them in the swirled Cool Whip. I used the same wire rack that goes inside my Instant Pot to let the Cool Whip-coated eggs sit for about 10 minutes before giving the boys paper towels to wipe them off. Once they wiped off the Cool Whip, the swirled colors remained and looked a lot like every tie-dyed T-shirt I've ever made. 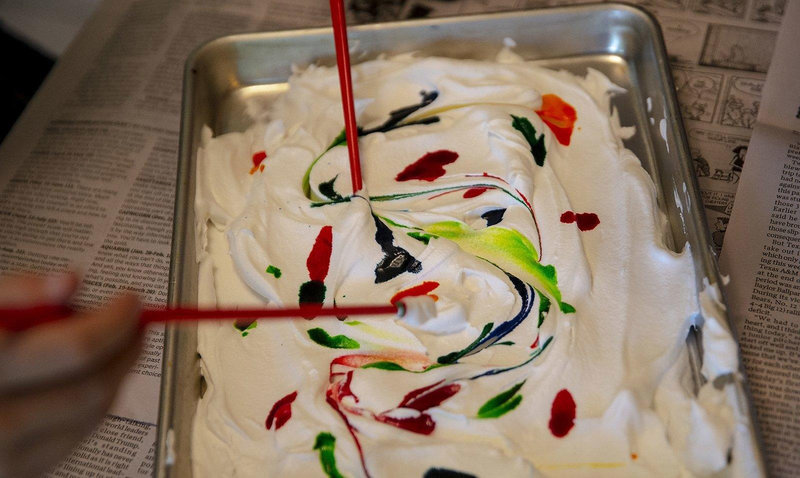 Another nifty food-related twist I saw online was using a similar method with uncooked rice. This one took a few tries to get right, but the idea is the same: Soak the eggs in vinegar for a few minutes, and place a layer of rice on a plate or in a small container with a lid. Squeeze a few drops of food coloring on the top, and then dry off the egg and roll it around in the rice, which creates all kinds of scratchy lines of dye on the shell. We found that using already dyed eggs worked best for this method so that the color would show through beneath the texture of the rice-applied dye.

One trick you'll see a lot online is using rubber bands and stickers to create layers of color. Both of these methods work well, but we didn't have as much luck with electric tape, which I saw recommended in many places. In our experiments, the tape slipped right off the shell when submerged in liquid. I did have success using an upside down cap placed in the bottom of a small glass, which held the egg in place so I could slowly pour in the dye. If you pour in a little bit of dye every five minutes, you can create an ombre effect that, though laborious, looked impressive and was perfectly suited for Instagram.

We had fun using crayons, but not in the way you might usually use them in the egg-dyeing process, which is to write on the shell to prevent that part of the shell from absorbing dye. (Although we did write our names on a few eggs just for old time's sake.) This method calls for heating the eggs in the oven for about 10 minutes until they are hot enough to melt the wax from a crayon. You'll want to have tongs handy so you don't handle the eggs directly. The hot eggs easily melted the wax, and once the eggs cooled a little, we could rub the colors around to make some really neat designs on the eggs. 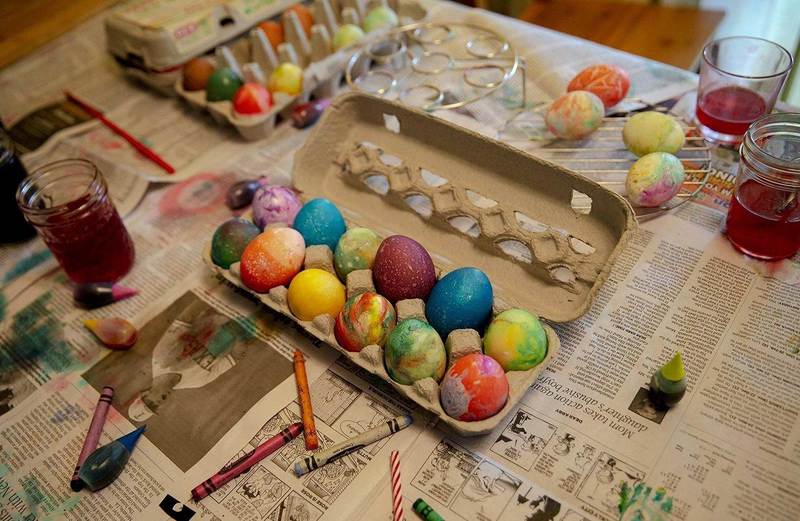 I prefer working with the eggs so that I can still eat them later, so I don't leave them out of the fridge for more than 30 minutes and I don't coat the outsides with inedible materials. I have seen some really beautiful techniques that call for using rubber cement on the outside and then peeling it off after you dye the egg and another that calls for using silk ties.

For that technique, you cut up a silk tie (or anything else that's silk) into squares large enough to wrap around the egg. Cut out similar sized pieces of cotton, and then wrap up unboiled eggs in the fabric, with the pattern side of the silk pressed up against the shell and the cotton on the outside. Tie with a twist tie or a rubber band and then simmer for 20 minutes. Remove the fabrics to reveal the pattern that transferred to the egg.

No matter which method you use to dye eggs this year, it's rewarding to remember that this annual art project is actually a cultural tradition that dates back so much further than many of us might have realized when we were kids — or maybe even teenagers — fishing out a rainbow of eggs with those little wire dippers.

How to plan the perfect Easter egg hunt

How to plan the perfect Easter egg hunt