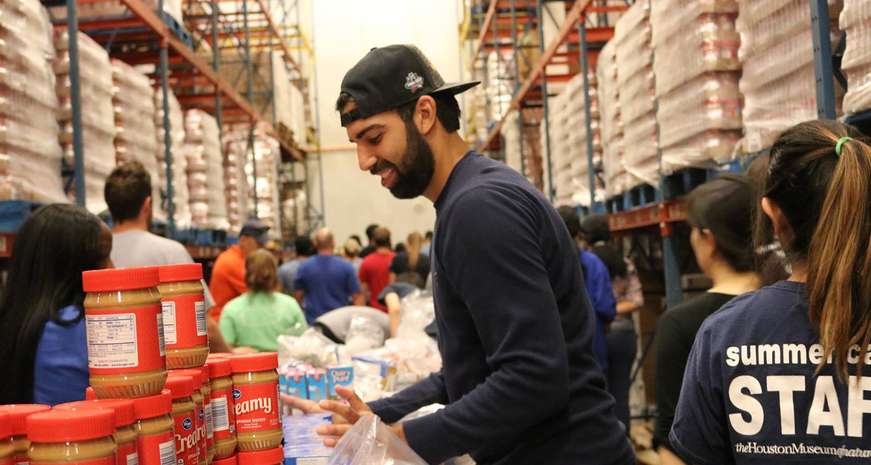 Help after the hurricanes: How Southern food is supporting storm victims

Southern hospitality dictates being neighborly to those in need, and the 2017 hurricane season is creating quite a need for food, shelter and safety in the Gulf region of the South. This is why several Southern restaurants and organizations are giving back, donating time, energy and money so that charities and nonprofits can get meals, clean water and other supplies to those victims of who need them most after back-to-back Gulf hurricanes.

Texas and other Southern states, including Louisiana, Mississippi and Arkansas, are dealing with Hurricane Harvey’s aftermath. And with heavy damage reported in parts of Florida, and concerns for more damage coming to Georgia, Alabama, Tennessee and South Carolina, Hurricane Irma promises to be disruptive as well. Recovery and cleanup will take months, if not years, and billions of dollars in financial assistance.

Here’s a list of charitable efforts being made by restaurant communities in Texas and beyond. By supporting their efforts, you can simultaneously support those whose lives are impacted.

Feeding America
September is Hunger Action Month in America and there’s never been a better time to help others feed themselves. Feeding South Florida, a member of Feeding America, announced that it will need monetary donations immediately after the storm has passed over the state. You can donate directly and get more information at their website. Feeding America also has five food banks in Texas areas affected by Hurricane Harvey, and although the organization already staged supplies around the South before the storm, they continue to seek donations to support continued distribution of food and disaster goods and are coordinating with the American Red Cross and FEMA. Donate to their national disaster fund or one of the five Texas food banks they support here.

Texas Food Banks
Formerly called the Texas Food Bank Network, Feeding Texas uses the power of many to tackle hunger during crises like Hurricane Harvey and throughout the year in the state. With more than 20 affiliated food banks contributing to its efforts to provide statewide food security, they appreciate monetary donations and volunteerism, and according to the Houston Press could always use canned meats, fish and fruits, powdered milk, cereal, and PB&J. Read more about their efforts and how you can help here.

Tacos for Texas and National Guacamole Day at Atlanta's Red Pepper Taqueria
On September 16, which happens to be National Guacamole Day, both locations of Atlanta’s Red Pepper Taqueria will donate half the proceeds from guac sales to victims of Hurricane Irma in Florida. Red Pepper’s owner, Chef Mimmo Alboumeh, who also raised funds for victims of Hurricane Harvey with an event called Tacos for Texas on September 5 (where half of proceeds benefitted Houston Food Bank). “We are truly blessed to have such a supportive community and I feel compelled to help others,” Chef Mimmo told Southern Kitchen. “We have always been a charitable partner in Atlanta and will extend our support wherever it’s needed.”

Karbach Brewing Co.
This Houston brewery is hosting a “Happy Hour for Hunger.” Half of your $20 admission price – which includes three drinks and a souvenir pint glass – goes to the Houston Food Bank and its f.r.e.s.h. Young Professionals group. This “action-oriented service organization consisting of socially conscious young professionals who are motivated to take action and bring awareness to the issue of hunger” is involved in fundraising, advocacy, social and volunteer efforts.

Southern Smoke
The annual Houston-based charity event Southern Smoke, which historically raises funds to help people living with multiple sclerosis, is shifting priorities this year after Hurricane Harvey impacted so many members of the city’s beverage and culinary community. Hosted by co-founding chef Chris Shephard of Underbelly, this year’s event happens October 22 and received support from Chef Sean Brock of Husk, who donated 100 percent of proceeds from the sale of pimento cheese and wines from California-based Lioco Winery at his Charleston location.
You can purchase tickets now, donate directly online or text SouthernSmoke4Harvey to 243725 to give your support.

A $100,000 matching gift from restaurants in the nation’s capital
Black Restaurant Group, comprised of 9 restaurants and bars in Washington, D.C., are collecting donations to assist hospitality industry workers through September 14, with a goal of amassing $100,000, which they will match dollar-for-dollar. Donations are tax-deductible and can be made when you visit any Black Restaurant Group restaurant by using a temporary donation line on your check. You can also send payments by mail to Black’s Family Foundation which shares BRG’s address, or donate online here.

Grants for restaurant industry employees
Houston’s restaurant industry workers are expected to endure a sustained period of uncertainty with their jobs and livelihood. And since few cities understand how tough it can be to come back from a severe hurricane like New Orleans, restaurants in the city are giving back. Collaborating with Ti Martin of Commander’s Palace, the Louisiana Restaurant Association has activated a relief fund for hospitality employees. “Having gone through Katrina,” Commander’s Palace Marketing Manager Darla Fisackerly told Eater, “we know that people are paying rent or a mortgage on a house that’s flooded while paying for somewhere else to say in the meantime. Cash is extremely important, especially in the beginning. The idea is to get the money into their hands as soon as we can." Donations can be made at GNOF.org.