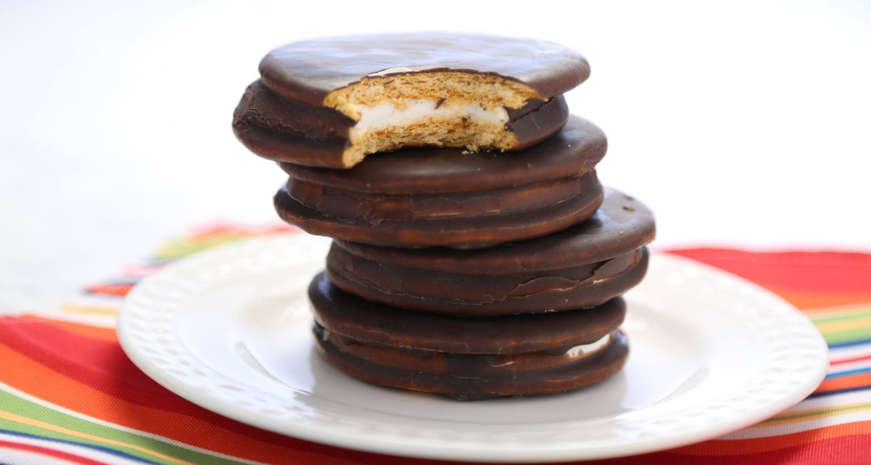 You know all about the beads, parades, masks and mayhem of Mardi Gras in New Orleans. But did you know that the country’s first Mardi Gras celebration was held not in the Crescent City, but 125 miles east, in Mobile, Alabama? It’s true, and there’s more: snack-lovers who get there in time for the parades can seriously rack up on free MoonPies.

Here’s the backstory: In 1703, Mobile was the capital of French Louisiana. French Catholic settlers brought with them their “carnival” traditions of feasting, revelry and merriment on the days preceding Ash Wednesday, which was followed by fasting during the somber, sacrificial season of Lent. Fifteen years later, Louisiana's capital moved to the newly founded New Orleans, as did the Mardi Gras tradition.

But it’s well-documented that Mobile’s first parade was held in 1711, when 16 men pushed a cart carrying a large papier-mâché cow's head down the street, kicking off a big outdoors party.

Similar to New Orleans, Mobile krewes are known for hurling a particular Southern delicacy: the chocolate-dipped marshmallow and graham cracker sandwich named after our planet's only permanent natural satellite. 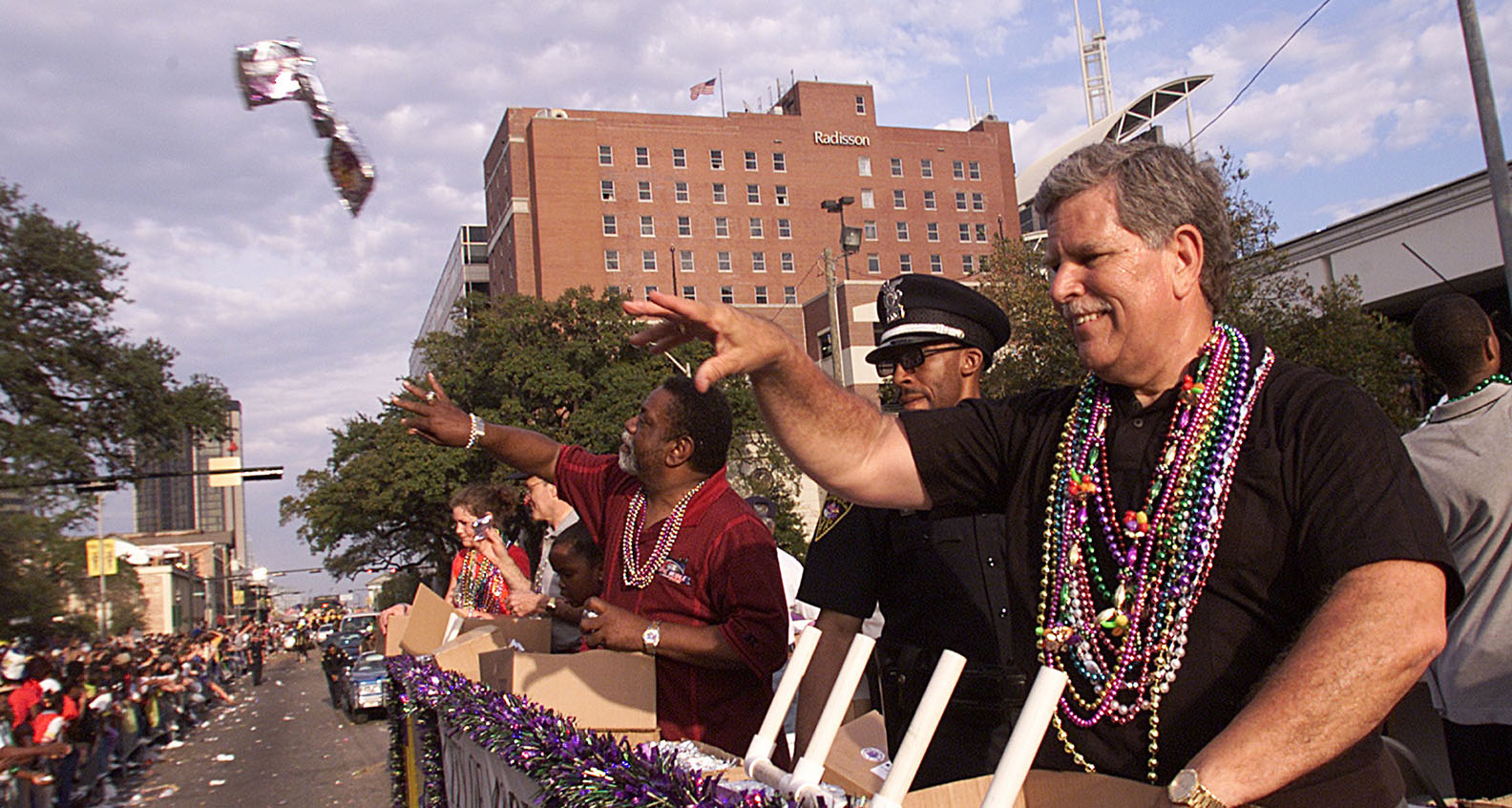 According to Judi Gulledge, who is the executive director of the Mobile Carnival Association and also runs the Carnival Museum, the MoonPie tradition began in the 1940s and 1950s, when float organizers wanted to toss something softer into the crowds than Cracker Jack boxes.

"The MoonPie became a staple throw in Mobile in the early 60s," said Gulledge. "Members from a local ladies' organization were in Chattanooga at a convention meeting and ran across some MoonPies, and thought they would make a great throw. The reasoning? They are soft and have some weight to them, so when the ladies' tossed them, they had some leverage. They were looking for something economical, and MoonPies checked all of the boxes. They brought them back to Mobile and it caught on as a novelty."

Now, an estimated 500,000 MoonPies from Chattanooga Bakery are thrown each year. 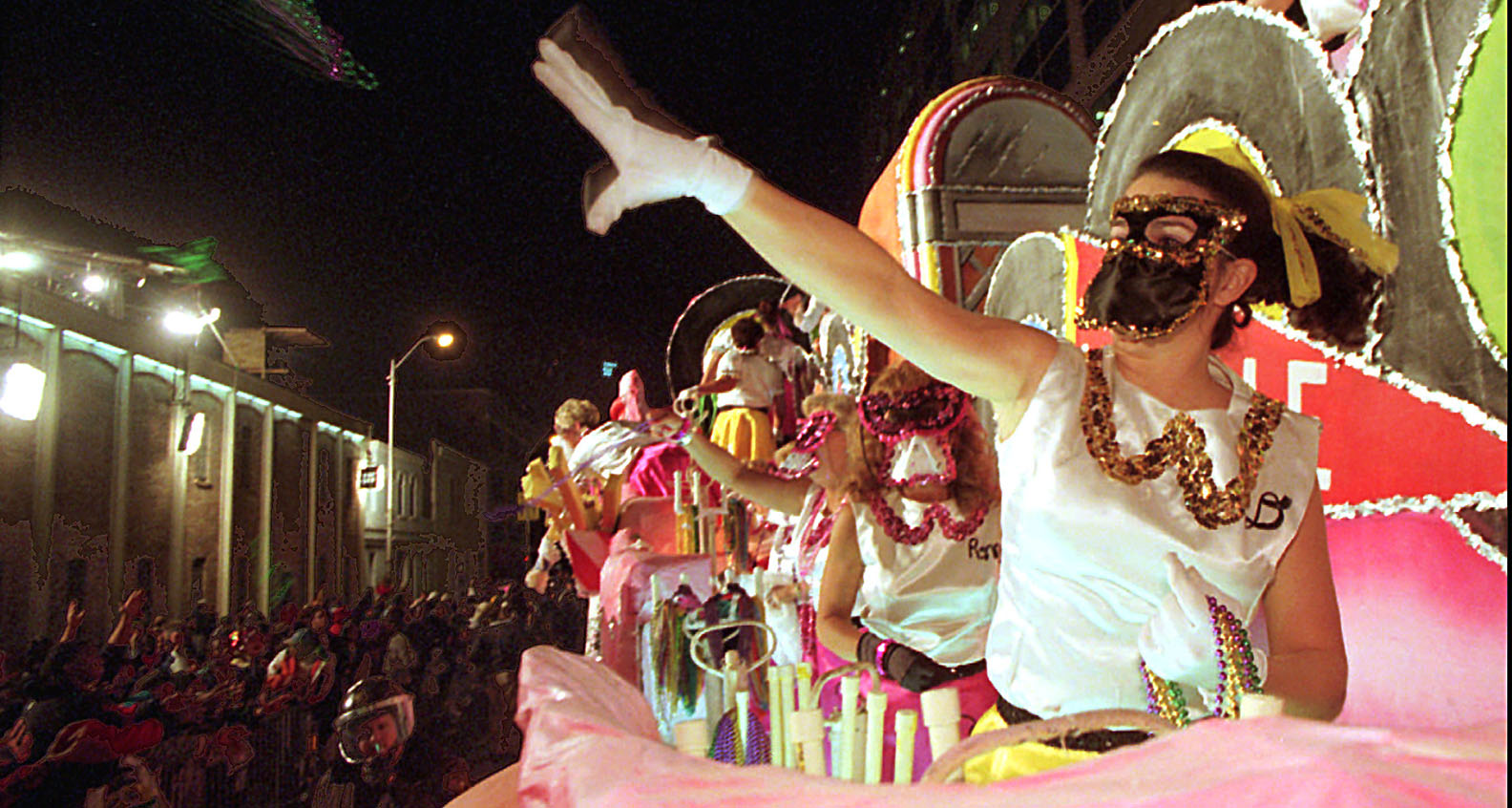 “While MoonPies are definitely unique to Mobile, most of our other food traditions, like King Cake, beignets and seafood, we share with New Orleans,” explained Mobile native and local caterer Clifton Morrissette. He hosts a large Mardi Gras street party on the Sunday before Ash Wednesday, where more than 3,000 people line up for his fried oysters, rack of lamb, boiled shrimp and other Southern treats.

Mardi Gras isn’t just another holiday in Mobile — it’s a way of life. While the city’s festivities are less boisterous than those of their rowdy western neighbors, they don’t lack for community or heart. “Our Mardi Gras is definitely more intimate than New Orleans,’ but we think that makes it even more special,” said Tara Zieman, marketing and communications manager for Visit Mobile, the official marketing organization for the city, “especially because ours is the original."

“Basically, it’s a non-stop party downtown,” affirmed Morrissette. “The restaurants and street parties go for 18, 20 hours a day. We’re all definitely ready for Lent by the time it rolls around. And then we start planning for next year.”

“Plus, it’s more family-friendly,” Zieman continued. “I love watching the parades, seeing college kids and families with young children, and older people who’ve been doing this for fifty years all lined up on the street together. There’s spirit and vibe, and an electricity to it all unlike any other time of year in the city.” 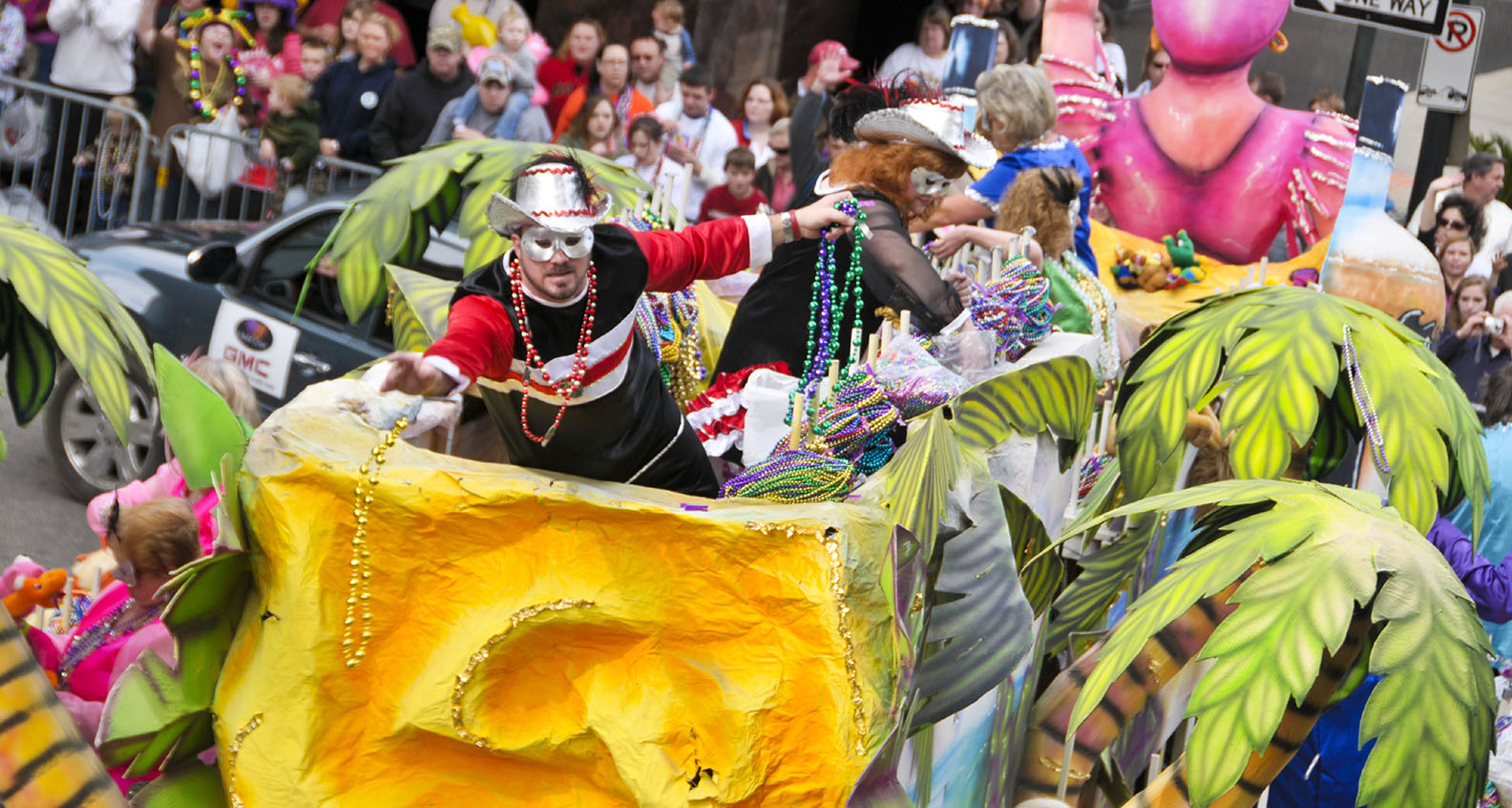 If you can get there early enough, visit Mobile’s Carnival Museum, which documents the holiday’s 300-year history, before hitting the festivities. The museum includes more than dozen rooms and is filled with historical photographs, elaborate costumes and crowns, parade videos and even a life-sized interactive replica float.

The Sunday before Fat Tuesday is also host to another singular Mobile Mardi Gras tradition, Joe Cain Day. The holiday’s namesake is credited with developing most of the city’s longstanding Mardi Gras traditions. And unlike the city’s other parades, which are limited to members of Mobile’s longstanding and often-secret societies, the Joe Cain Day Procession, or “people’s parade,” is open to anyone, though now requires advance sign-up for safety and permit reasons.

The parade typically kicks off at 2:30 p.m. with Joe Cain’s Merry Widows, who wear long black funeral gowns and dark veils, and lead a procession of more than 100,000 to Joe Cain’s gravesite, where they place wreaths on his tombstone and toss black beads into the crowds. The procession continues to Cain’s original house on 906 August Street in Oakleigh Historic District. 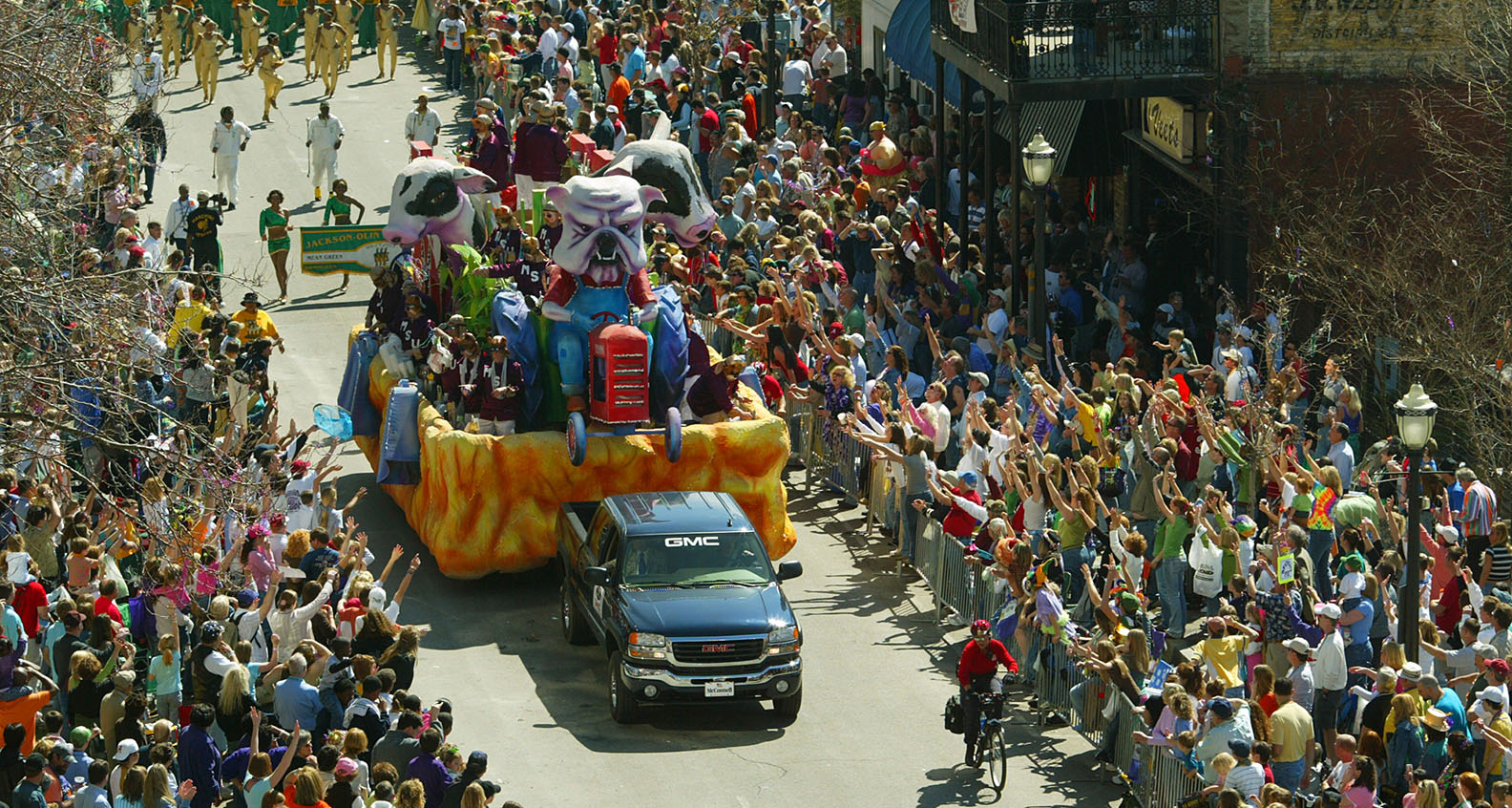 If you choose to simply spectate Joe Cain and other parades throughout the weekend into Tuesday, Zieman recommends Royal and Government Streets for their wide vantage points. The city has six official parade routes, and there are more than 14 parking lots downtown, so there’s ample opportunity to watch bands, floats and costumed masses rolling by, and of course, catch as many round, marshmallow-y dessert snacks as possible.

Can’t make it to Mobile this year? No worries; you can still celebrate in style from the comfort of your kitchen with Southern Kitchen's take on the Moon Pie with this delicious cake. 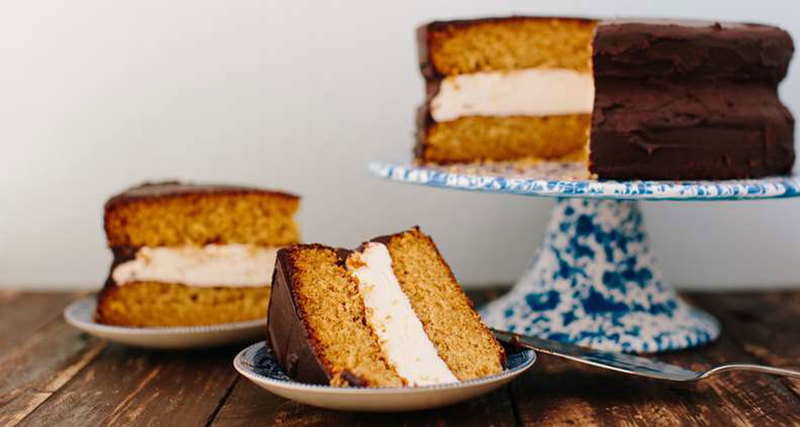 Instructions
To make the cake: Heat the oven to 350 degrees. Lightly coat two 9-inch round cake pans with nonstick oil spray. Line the bottom of each pan with parchment paper rounds; spray the parchment with oil spray.

In a food processor, process the graham crackers to form fine crumbs. Transfer 1/2 cup to a medium bowl; discard any extra. Whisk in the flour, baking powder, baking soda and salt. In a liquid measuring cup, whisk together the milk and vanilla.

In a stand mixer fitted with the paddle attachment, beat together the sugars, butter and oil on medium-high speed until smooth, 2 to 3 minutes. Beat in the eggs, one at a time, until smooth.

Reduce the mixer speed to low and add the flour mixture in three batches, alternating with the milk mixture. Scrape down the sides and bottom of the bowl as needed. Continue to beat on low speed just until smooth.

Divide the batter equally between the prepared pans and bake, rotating the pans halfway through, until a toothpick inserted into the center of the cakes comes out clean, about 30 minutes.

Let the cakes cool in the pans for 10 minutes and then invert the cakes out onto wire racks. Let cool completely, 1 to 2 hours. If desired, use a bread knife to gently shave off the edges of the cooled cakes to imitate the rounded edges of a MoonPie cookie. Place one cooled cake on a wire rack set inside a rimmed baking sheet.

When the cakes are cooled, make the marshmallow filling: Wash the stand mixer bowl and fit the mixer with the whisk attachment. Pour the gelatin into the mixer bowl and cover with 1/3 cup of the water.

Pour the remaining 1/4 cup water into a medium saucepan. Pour the sugar into the center of the saucepan, trying not to hit the sides of the saucepan with the sugar. Add the salt. Place the saucepan over medium-low heat and let the sugar melt into the water. If necessary, gently swirl the saucepan to help the sugar dissolve. Once all of the sugar has melted, increase the heat to medium-high and bring to a boil. Continue to boil, without stirring or swirling, until the mixture reaches 238 degrees, 3 to 5 minutes.

With the mixer running on low speed, carefully pour the hot syrup into the gelatin mixture. Be careful not to hit the whisk while you're pouring in order to avoid splatter. Increase the speed to medium-high and continue to beat until the mixture is opaque, glossy, very thick and the exterior of the bowl is cool, 10 to 15 minutes. Beat in the vanilla until just combined.

Top the marshmallow with the second cake layer. Refrigerate while making the ganache.

To make the ganache: Place the chocolate in a medium bowl.

In a small saucepan, heat the cream over medium heat until just starting to simmer. Pour the hot cream over the chocolate and let sit until the chocolate has melted, 1 to 2 minutes. Use a spatula to stir together the cream and chocolate until smooth and homogenous.

Pour about half of the ganache over the top of the cake. Use the offset spatula to spread it over the edges so that it drips down over the sides. Spread additional chocolate across the sides of the cake to coat, reserving a few tablespoons of ganache for touch-ups, if needed.

Refrigerate the cake until the ganache has set, at least 30 minutes. Use a small spatula and additional ganache to mold and patch the sides and edges of the cake to imitate the shape of a MoonPie.

Let the cake come to room temperature before serving. 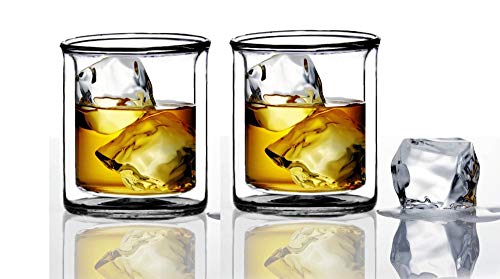 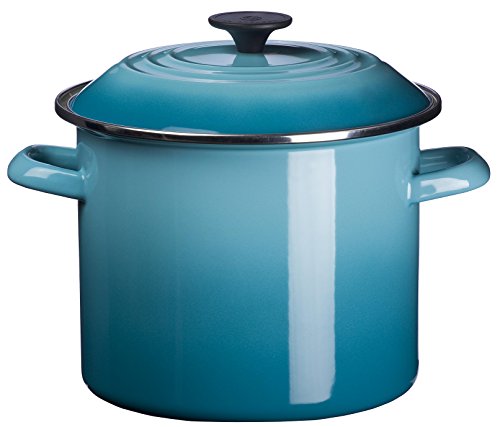 Cook up a Mardi Gras feast with these 9 recipes

Cook up a Mardi Gras feast with these 9 recipes